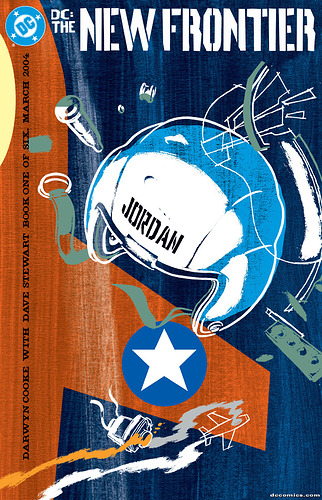 We’re reading through New Frontier. Since these issues are pretty long (like, almost 70 pages) we’re only doing 1 issue a week. Please avoid spoiling anything from issues beyond this week.

Awesome! I’ll definitely be trying to keep up with this one.

Nice! I would say it’s the second best DC book.

I saw it coming but only barely… that page spread of Cloud jumping into the T-rex’s mouth with the grenades was amazing. That and Jimmy as a teenage stow-away to the Korean War.

What do you think of Hal’s actions during chapter 3?

Oof. That hurt. Even if he had remembered the words in time it’s likely the soldier wouldn’t have believed him anyway. But that still hurt a lot. There was nothing else Hal could have done though.

On time for this one for once!

Sure. It’s funny, when it comes to The Losers I think I’ve only really seen him here on some variant of Dinosaur Island, between this story (and the animated movie), their cameo in Superman Rebirth when Clark and Jon went to the island, and the recent animated short with Batman: The Long Halloween. I think this story has kind of become their most iconic story. Makes me curious to see what they’re like outside of Dinosaur Island.

I’ve read this a few times before, so…not that much? The first issue is full of iconic moments for this story, so it’s probable that I’ll have some surprises as we continue.

This read-through did make me decide to look into some of the more historical aspects that the book touched on.

First I looked up Chuck Yager, and to my complete lack of surprise, he was a WWII pilot who ended up becoming a test pilot, who was the first pilot to break the sound barrier. He is definitely a good real world figure for Hal to look up to.

But there was another thing I looked up which I’ll just tie up with the next queston:

What do you think of Hal’s actions during chapter 3?

First, I’ll say that like @Row.Harper said, there was nothing Hal really could have done, but it’s perfectly understandable that Hal would feel emmensely guilty over it.

What isn’t understandable, now that I’m starting to think about it, is how Hal was able to be a fighter pilot and a conscientious objector at the same time. Because I also looked this up, and from the small bit of Googling I did, I don’t think that can be workable. According to the Department of Defense, if a noncombatant soldier can be in a warzone “unless the service requires personal and direct involvement in the operation of weapons.” I don’t know about you guys, but I think being a fighter pilot does require handling weapons. They say that Hal is a gifted pilot, but what’s the point of having a gifted pilot if they’re not doing their job?

Look, I get why they went with this: after all, while there is way more realism in this story, this is meant to be a Silver Age story, and in those stories, superheroes don’t kill. But looking at the military’s record of things, I’m not sure if I really buy it.

I think this plot point/character arc would have worked better if he was a regular fighter pilot who was traumatized from having to kill someone up close and personal like what we saw here. Or, maybe if they really wanted to make the no killing thing work, they could have made Hal a mechanic, maybe his base gets attacked by North Korean soldiers who don’t know the war is over and he has to shoot the soldier to defend himself. Or hell, maybe have him be the helicopter pilot we see escorting Jimmy and Lois, their copter gets shot down, and then he has to kill the soldier.

I mean, I’m not trying to drag the whole story down for this, don’t get it twisted. This story is still a classic. I think with how well Cooke is able to add realism to this story, a discrepancy like this just sticks out like a sore thumb to me now.

Don’t know much about them, but great story. Loved the pooch. Wish he would have gone with Flagg.

While I didn’t particularly enjoy the newspaper-like format of chapter 2, I was surprised with Hourman missing a jump between rooftops. Also, I don’t follow anything Superman, so I know very little about Lois Lane, but dang she seems super snobby.

Insane. Just the thought of going the entire war as a fighter pilot without any actual fighting is crazy. But, to add that ending where the war is over but still forced to kill the enemy.

Loved the pooch. Wish he would have gone with Flagg.

Yeah, seeing the pooch die is never good, but there’s a certain poetic quality of the dog being with his human to the bitter end.

I was surprised with Hourman missing a jump between rooftops.

Now that I think about it, with Cooke later doing the Before Watchmen: Minutemen series, I wonder if maybe that was meant to evoke some of the stuff that happened to the Minutemen in Watchmen, like Dollar Bill getting his cape stuck, or Mothman losing his mind – a horrific incident that sort of tapers the innocence of the Golden Age of heroes.

Also, I don’t follow anything Superman, so I know very little about Lois Lane, but dang she seems super snobby.

Eh…I can kinda see that. While in the Golden Age she also came from a family of farmers, she’s a mix of a City Girl and Army Brat since around the 80s.

To me, she came off less “snobby” and more just confident in her abilities and ready to just get the hell home – the war was over, after all.