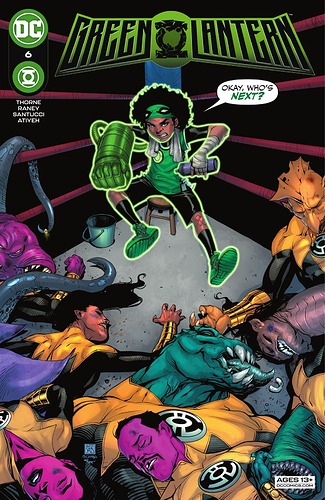 This series of posts is to discuss the latest issues of Green Lantern. The issue can be read here.

I think I would go with Jo meeting Sinestro for the first time. It was kind of funny seeing Jo handle him in such a calm but dismissive way, and I think Sinestro agreed, appreciated her blunt demeanor.

The weird angel alien things were sort of a…choice addition to the whole Dark Sector’s woes.

In the story, there really wasn’t enough to get an impression of where he is now. I do generally like Kilowog as a character, though.

The Jo - Sinestro interaction. She’s quickly becoming one of my favorite characters with how she deals with things in clever ways that give her the edge.

Jo trapping multiple members of Sinestro’s corps as if it was nothing. Really sets her up as an incredible GL.

I’ve loved pretty much every version I’ve seen. Don’t often get to see him without his ring, though.