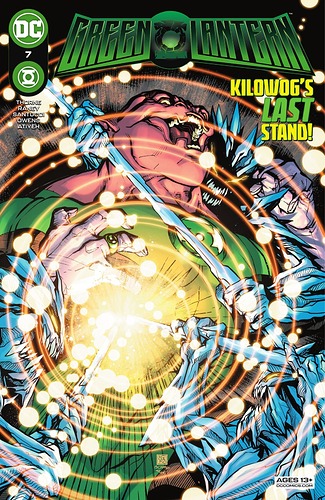 This series of posts is to discuss the latest issues of Green Lantern. The issue can be read here.

I really liked seeing the battle between New Genesis and Apokolips. Seeing how insanely overpowered the young guardians were there makes you wonder if Darkseid even matters.

The various constructs of the Earth heroes was unexpected. Although an army of green Robin was pretty funny.

Really interesting. No idea what happened to John, but excited to see what happens next.

I guess the scene of Simon comforting Teen Lantern was nice, though I feel like it’s happened a lot in various different ways. It was also cool to see her former Young Justice crew as her constructs.

I was surprised to see not just the New Gods, but past iterations of it like young Uxas and lesser known characters like the Forever People.

Also, for a cover that talks about “Kilowog’s last stand,” I was expecting to see more…you know…Kilowog.

I’m not gonna lie, I’m not sure if I saw any Golden Centurions in this? Was that what the Guardians were? They weren’t wearing any gold.