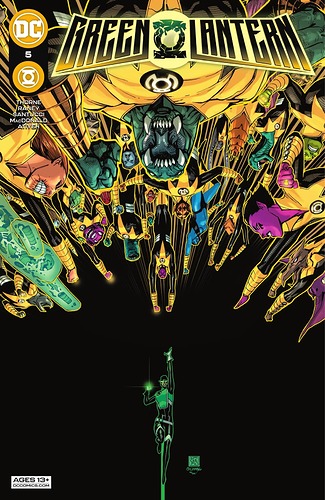 Teen Lantern. Taking on three Sinestro corps on Korugar is impressive. Especially seeing some of the powerhouses that were in front.

The random yellow lantern that one Simon. No idea who it is, but for some reason my brain wants to say it’s Jessica Cruz.

Another instance of the “about this book” not saying accurate things. Hope she meets them at some point. Would be interesting.

Probably Teen Lantern’s assault on Sinestro’s world. I’ve been “eh” on her character, but she had some great and cool constructs.

Hmm…I had a feeling that Kilowog was going to make it, but seeing him in civilian clothes was…odd.

I don’t think we get Jo’s perspective or interaction with him at all. The boxes have a yellow tint and had the Sinestro Corps logo on it, which tells me that they are a SC member that knows a lot about fear…

I’m pretty sure I know who it is, but since the issue is being mysterious about it I won’t spill the beans, but they definitely know a lot about what fear does to someone suffering from trauma like TL has…