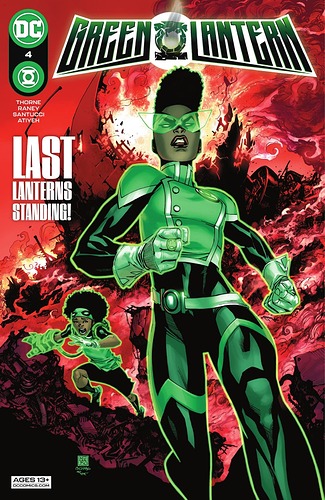 Teen Lantern getting all powered up near the end. No idea what she was saying, but she’s clearly fired up and ready to go.

The whole Faraday cage thing was weird. Why would they randomly have one under a house? And better yet, why would you solely power armor and weapons via a ship above the planet?

The Oa story. I know nothing about the Teen Lantern, so I’m excited to see what she has to offer.

I would go with John taking out a bunch of slavers. That’s always good to see.

The body count that is coming from the destruction of the battery. You know characters like Guy and Kyle are coming back, but Arisia is just a big enough name to have an impact but small enough that she could stay dead.

I don’t know, both have intriguing mysteries and their share of cons. John has the whole “ascension” mystery, but I don’t really care much for the generic alien farmers. Jo has, well, Jo and the mystery of who destroyed the battery, but still kind of “eh” on Teen Lantern.