Do You Know Where Your Fave Is?

We’re still in the same timeline. Shazam is the star of an ongoing series by Geoff Johns along with the rest of his family, but it’ll be winding down soon. Most recently, they teamed up with Black Adam to fight Superboy-Prime, and then went out for pizza.

Clayface made a surprise return at the end of Tom King’s “City of Bane” storyline to give the Batfamily a hand in their hour of need. Since then, he’s faded back into the background. I like to think he’s out there with Victoria October, trying to discover himself outside of the lifestyle of good vs. evil.

Where is Guy Gardner?
Last I saw he was a drill sergeant on Oa training Jessica.

Where is Black Lightning and Thunder???

Guy Gardner is still with the Honor Guard on Oa. He was last seen in the Green Lantern 80th Anniversary Special, setting up a surprise birthday party for his pal Kilowog.

In BATMAN AND THE OUTSIDERS, Black Lightning has been the field leader of Batman’s latest incarnation of the team, which includes Katana, Duke Thomas, Cassandra Cain, newcomer Sofia Ramos, and Lady Shiva (who invited herself). Black Lightning recently underwent a serious power upgrade, and defeated a cataclysmic plot by Ra’s al Ghul.

Black Lightning’s daughters haven’t made any appearances since Jefferson was made younger during the continuity changes of The New 52. A new version of Anissa Pierce, reinvisioned as Jefferson’s younger cousin, appeared as one of his students in 2018’s BLACK LIGHTNING: COLD DEAD HANDS.

Oh that cousin thing is weird. But otherwise, that’s really cool. He and his family really deserve their own title on top of being included in a few teams like JL and the Outsiders.

IK what’s been up with Nightwing but what’s going on with the rest of the Titans? What happened to them after the JL made them disband?

After NO JUSTICE, the Titans were reformed with Nightwing as the lead under the auspices of the League itself, with Miss Martian acting as their JL liaison. Their mission was to aid and defend against new metahumans whose transformations had been triggered by the breach of the Source Wall. Donna took over as the de facto leader after Dick became Ric, and helped Raven reunite with her lost soul self and Beast Boy return to his original power set, after being warped by the breach himself. With the threat ended, the team now works as reserve members for the Justice League.

Where is Atom Smasher? I do not know of him being in anything post-Flashpoint, and he normally sticks out in crowd scenes.

Because Atom Smasher is a legacy character tied into the JSA, Al Rothstein spent a long time apart from mainline DC continuity beginning with The New 52. But alongside his JSA cohorts, Al finally returned to the DC Universe in the finale of DOOMSDAY CLOCK #12, where Doctor Manhattan undid much of what he had secretly wrought behind the scenes. 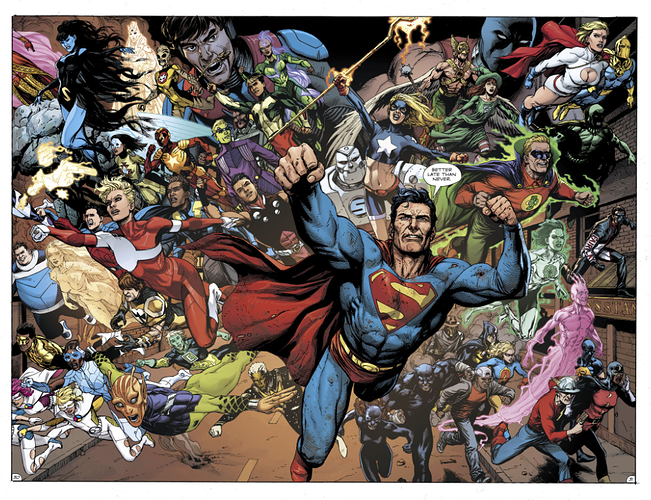 Since then, Atom Smasher has gone on to make appearances in certain story arcs taking place within the liminal spaces of reality and the multiverse, such as GREEN LANTERN: BLACKSTARS and DARK NIGHTS: DEATH METAL, but the concrete role he plays in the landscape of the modern DCU is yet to be defined.

I’ve been trying to find some more John Fox comics. He’s not someone who’s been used much in recent years to my knowledge. The last time I think he was in a comic was for the DC One Million 80-Page Giant from '99.

There’s more for you to read! Check out the following books:

…and this March, check out THE FLASH #761, where John is among the many Flashes who come to the Flash Family’s aid against the Legion of Zoom.

@HubCityQuestion … I could kiss you lol. Thank you so much!!!

Is this also the last known location of my underrated fave, Cyclone?

And speaking of the Tornado family, what’s the modern android Red Tornado up to? Anything since his little joke in Heroes in Crisis?

Is this also the last known location of my underrated fave, Cyclone?

And speaking of the Tornado family, what’s the modern android Red Tornado up to? Anything since his little joke in Heroes in Crisis?

Cyclone last appeared in the Stargirl Spring Break Special this year, as part of a teaser for a storyline which (in typical Geoff Johns fashion) has been radio silent for a while now. She’ll probably pop up again whenever he has time to get back to it.

As for Red Tornado, he was most recently seen fighting among DC’s heroes in the events of Dark Nights: Death Metal.

I was reading through one of my Lone Ranger paperbacks recently. A particular passage about Tonto suddenly made me remember Flying Stag, aka Super-Chief. He was created in 1961, but didn’t last long in All-Star Western. But, as perhaps the first western/super-hero hybrid character, I do remember him quite well.

I know a couple of modern day versions have appeared over the years, since then. One died, and lost his magical totem, the Manitou Stone, to Ralph Dibney. How that happened, I couldn’t begin to tell ya. Another, appeared with the short lived Supermen of America. Although I don’t remember any connection between them, I’m assuming there must have been. Question, whatever happened to the Manitou Stone? Question, whatever happened to the Supermen of America, and Super-Chief #3? Are they even part of the new DCU now? With DC’s push for greater diversity these days, I’m surprised " the Chief " hasn’t turned up somewhere. Or has he?

One died, and lost his magical totem, the Manitou Stone , to Ralph Dibney. How that happened, I couldn’t begin to tell ya.

If you read the excellent 52 maxiseries, perhaps you can! Jon Standing Bear, the second Super-Chief, died in a battle against the Mr. Mind-controlled Skeets, and his ancestor, the first Super-Chief, appeared as an apparition to pass the Maintou Stone on to Ralph Dibny in his own magical quest with a warning of its power – perhaps knowing that Dibny’s quest would eventually lead him to face Neron.

As for the next Super-Chief and the “Supermen of America” concept, the entire idea was one introduced in just before September 2011, a sort of liminal space in DC history as the company was preparing to sweep the decks for The New 52. However, a version of Superchief continues to live on in Multiverse-centric stories, as one of the premiere heroes of Earth-18 – home of the Western-themed “Justice Riders.”

Other members of the “Supermen of America” introduced and appearing only in that final, Pre-New 52 included Steel, Conner Kent, and Supergirl, who remain active heroes in the DC Universe; Livewire, whose late Pre-Flashpoint reformation has been swept away, and continues to operate in villainy; and Iron Munro, who maintains a presence in the multiverse as well as a hero of the pulp action-inspired Earth-20.

So then, Ralph still has the stone, tucked safely away somewhere?

Probably not! Ralph died at the end of 52, and spent the rest of Pre-Flashpoint continuity as a ghost detective with his wife Sue. Post-Flashpoint, Ralph and Sue were returned to life, their deaths and thus Ralph’s quest in 52 to resurrect his wife negated from continuity. So it’s safe to say the Manitou Stone currently resides on Earth-18.

Now that I’ve rediscovered this site again, let me hit ya up with 3 more among the missing. Signalman, Dr. Tzin-Tzin and Roy Raymond, TV Detective?