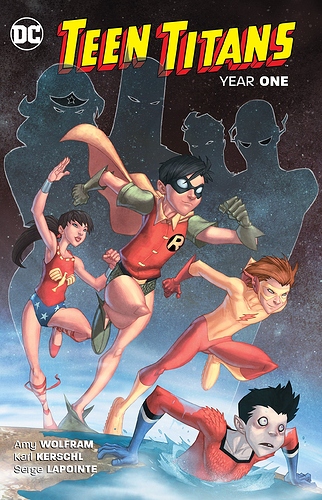 This month, we will be reading Teen Titans: Year One #1-6. Personally, this series holds a very special play in my (Nightroia’s) heart. These issues were the first comic books I ever read (along with Robin: Year One), and this series is what got me so into comics in the first place. I hope you all enjoy it as much as I did!

Journey back to the formation of the Teen Titans and experience the group’s earliest victories.

If you have any questions, feel free to message me (@Nightroia) or @A1waysAJ.

I have had had this book on my shelf for a while and it hasn’t been read. I now have a reason to read it!!!

Nice! I’m excited to finally pull this book out again. It’s been sitting on a shelf for like 10 years now.

I really like this series, even if it just kinda ends abruptly. It’s a treat for anyone who enjoys the original Titans series from the 60s and 70s, and it’s a safe alternative for anyone who would be overwhelmed by all the goofiness of those books. Furthermore, the art style is just perfect for the tone of the story. I like it more than certain other Year One stories, for sure…

I’ve also read a little of this in the past (the first issue was free on Comixology a while back and I’m a sucker for free comix), looking forward to going through this one.

I completely agree! I think they look a lot more like teenagers than in the original comics. It also has a much more serious tone while still keeping some of the light-hearted antics of typical teenage behavior (dealing with acne, crushing on boys/girls, etc.).

Teen Titans: Year One is kind of weird in that it tells multiple stories as opposing to using all 6 issues to tell one story. The first story was confusing at first as it Batman and other Justice Leaguers being bad guys. This honestly could have lasted all 6 issues or and I would have been completely happy. Actually, I think it would have made more sense as I don’t believe Teen Titans could take down the likes of Flash, Wonder Woman, Aquaman, and Batman on their first try. They are just becoming a team yet these scenes felt like they have been a team for years. Even though I am being picky, I did enjoy this story arc which is why I think I am nitpicking.

The art actually reminds me of the recent Future State: Harley Quinn books. Each panel looks like it could have been a screen shot from an animated movie!

Golly, I only paid $3.99 for this fine TPB from Ollie’s. That was truly a fine bargain. 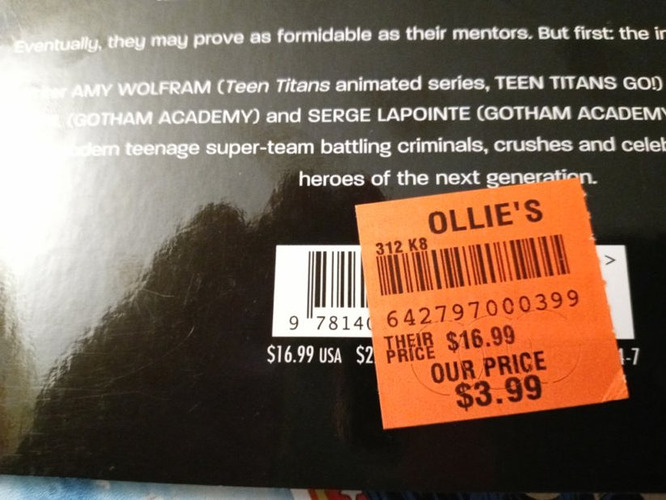 I also think that the evil mentors storyline could have been the whole series, or they could have expanded it the make that storyline last a little longer. I would have liked to see more about the Titans taking down their mentors. I think the fight scenes could have been really cool. I did, however, love this scene: 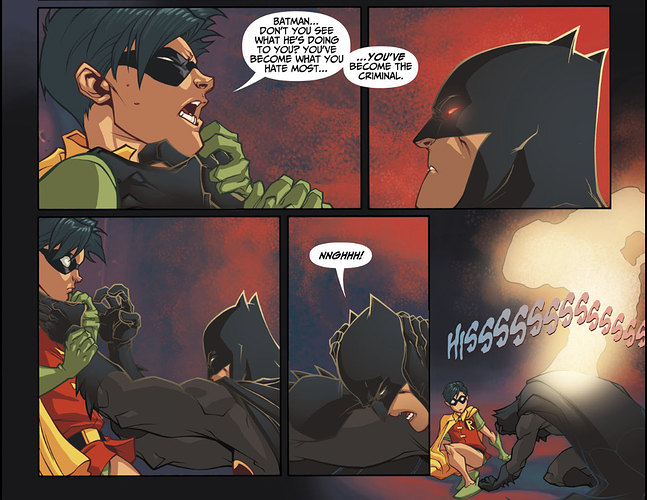 I like the art for this a lot – Kesel has a great style that feels borderline between traditional comic book style and animation. I feel like his style really gets it’s peak in Kesel’s Gotham Academy series (which if you haven’t read I highly recommend).

I mean, is it really a reimagining? They specifically namedrop the issue where the Teen Titans were first introduced, and everything feels like stuff that could have happened behind the scenes. I guess some of the characters get a revamp in personality, like Aqualad being an anxiety-filled mess and Donna being utterly boy crazy.

…Not especially? Like, the art was great, there are some nice individual moments of either comedy or a little pathos, but the writing for this really feels all over the place. Nothing really starts, nothing really concludes, nothing really happens.

I remember when I first read this last year, I just love the artstyle, it was easy to read. The only thing was disappointing was that it was a miniseries and not a ongoing series.
This was one of the best Teen Titans series I’ve ever read!

Karl Kerschl was great and this may be my favorite work by him.

Having read Teen Titans #53 back in the day, I think this retelling was a bit better. I really liked what they did with Aqualad. He really was like that at the start. In his debut issue, he was afraid of fish!