Sorry #TeamNightwing,
Life has been crazy the past couple weeks so we’re late

. @Nightroia and I haven’t gotten to do the next poll or even decide if we wanted to do something other than a reading. So I think the next best logical solution is to go ahead with the runner up from the last poll, personally my favorite Nightwing story to date…
Drum roll please?
uh… no? Not this time you say? Okay, I guess we’re going without one today. 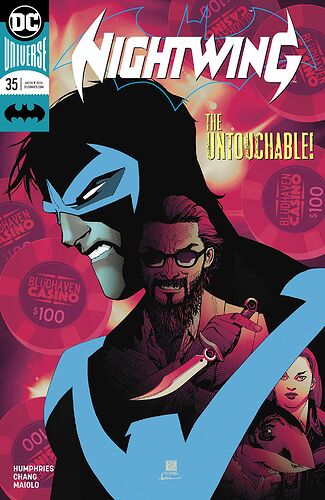 Nightwing: The Untouchable (#35-#41)! Shout out to Sam Humphries (not likely for him to see this, but it feels right) for this beautiful masterpiece! It’s in this thrilling tale where Nightwing is faced with a serial killer he was never able to catch twice before. Explore Grayson’s time as Robin and student in Hudson University to come face to face with The Judge!
For a deeper look into the story and the thought behind it check out this interview on YouTube between writer Sam Humphries and Interview Drake: https://youtu.be/P8jvbMDRAqU

Some things to think about:

Sound off in the discussion below whenever you’re ready and as always any questions, comments, or concerns please feel free to message @Nightroia or myself (@A1waysAJ) personally.

Okay, finished rereading for the first time last night before bed. I have to say it was so much easier to make questions or discussion points on a story I’ve actually already read. Like I said before this is my favorite Nightwing story to date. One thing about Seeley’s run (which was good but) that irritated me was how he pretty much used all of Dick’s former rogues as like a little CW type team. Like we got them to look cool and be formidable but they’re not foes anymore? No thank you. And his version of Bludhaven really needed some corruption. The Untouchable, while dong away with The Run-Offs actually brought some corruption to Bludhaven that it was missing and I love that! Corruption in the form a physical, human being. Honestly, The Judge is so good that I could see him literally being The Joker to Nightwing’s Batman. While Batman/Joker is all about order vs chaos, Nightwing has always been about helping people, doing it for “the little man”, and while in recent years he has been described as suffering from “itchy feet” he has never shied away from planting roots. So to have a villain that specifically just wants to harm people, further his own goals, and turn those roots upside-down or tear them from the ground completely is great. And this story imo is the perfect Batman/Joker origin story cuz The Judge’s entire shtick is he can corrupt anyone right? Well, he wasn’t able to corrupt Nightwing and if it’s as important to him as it seems then he would be obsessed with trying to corrupt him like Joker is with Batman. So definitely wanna see more from Judge in the future.
With all this Humphries really managed to capture both the Batman and Superman influences in Nightwing and combined them into a singular person and story, instead of just having one or the other like we get most of the time. He also managed to subtly give Nightwing back some skills that have been stripped from him over the years. His detective skills for one. Those detective issues were actually really good. He also didn’t ignore his time with the Titans as most (really all) writers on the book tend to do. Overall, Nightwing felt very intact in this story and I love to see it. The only thing I didn’t like was Dick owning a gym and being a personal trainer. Doesn’t really suit hum imo. With corruption being Brough back into Bludhaven I would really love to see Dick go back to being a cop. But if we can never get that I think social work is the next best option. That would be very “help the little guy” if that makes sense. But other than that I really love Humphries take on the character and definitely think he deserved a longer run on the character. But sadly from what I understand he left the book because DC decided to move ahead with Batman 50 and Amnesiac Ric and he wanted no parts of that which I highly respect if that’s true.
Another thing I love that Humphries did was the sorta small town superstition/urban legend culture of the locals of Bludhaven. The culture of Gotham is very obsessed with Batman whereas Bludhaven seems to lean more towards these unknown, mysterious figures from the past, very mystical if you ask me. Like how exactly did the sea water change The Judge into an immortal being? So could it be that Bludhaven locals are obsessed with the unseens magic of the world? Another character who’s legend I think would fit perfectly in Bludhaven is Solomon Grundy. He was “born” in Slaughter Swamp through an unknown process. The land has said to be home to some untapped magic. And it’s also said to be “a few miles” out from Gotham? Well, what else is a few miles out from Gotham, only a half hour drive down the coast? Bludhaven. And Bludhaven is surrounded by swamplands. Could it be that Slaughter Swamp is actually closer to Bludhaven than Gotham? I think so. I think this magic surrounding Bludhaven is worth exploring and I would like to see it. Maybe get some help from Zatanna???