Hello everyone and welcome to the World of Bats, the Batman Book Club!

First, sorry for the slight delay, got this idea for it way late and wanted to get the JL Book Club leader’s permission first before I kinda poach on his stuff.

That said, seeing as how we got the release of Zack Snyder’s Justice League coming this week, let’s explore a story of Batman in the Justice League, and what’s a bigger one than JLA #43-46, “Tower of Babel,” written by Mark Waid and drawn by Howard Porter? 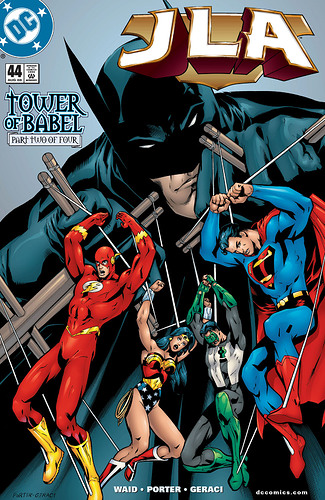 Batman is the ultimate strategist, using his intelligence and resources to secure his place among his super-powered allies in the Justice League, not just as a member, but as one of the team’s leaders.

But what happens when that intelligence is used against him? In the celebrated story line “Tower of Babel” by Mark Waid and Howard Porter, longtime Batman villain Ra’s al Ghul takes out the JLA, one member at a time–using plans devised by Batman himself, with specific methods to subdue his teammates if they ever got out of control. For Batman, they were emergency protocols to keep the world safe; for Ra’s, it’s step one in his latest scheme to control the world’s population. Can the Justice League recover in time to stop Ra’s?

Luckily, the fine folks at DCUI decided to group all four issues in a handy-dandy Storyline link which you can find HERE!

And if you’re still looking for more Batman and Batman-adjacent goodness, you can check out the reading from some of the other awesome groups and clubs in the DCUI Family.

As before, we’re continuing to partner with the Renegade Robins group, dealing with the last half of the books We Are Robin and Batman & Robin Eternal. The group is also following Damian Wayne’s harrowing misadventures during Death of the Family in Batman & Robin and Jason Todd’s post-breakup blues in his now solo Red Hood: Outlaw series!

[We Are Robin] Welcome to the first part of the next big event from World of Bats: The Batman Book Club! and the Renegade Robins Club! In the wake of Batman Eternal and Batman: Endgame, DC launched two new series: We Are Robin and Batman & Robin Eternal. This event topic will be the last one to be hosted on DC Universe, and the follow-up topic (covering Robin War itself) will be appearing on the sequel site, DC Universe Infinite! Join the Bats and the Robins today! We look forward to though…

[photostudio_1614319517798] Hello everyone and welcome to another monthly session of the DWBC here @RenegadeRobinsClub. This month we will be covering the Terminus arc, a battle between all the Robins and Death of the Family. Lets get to it! [photostudio_1614553926184] WHAT TO READ THIS MONTH Batman and Robin 10-17 Batman and Robin Annual #1 Batman #13-17 (For Death of the Family background reading if desired) This month I thought I’d post some questions each week and see where that tak…

Over at the Dick Grayson Book Club, the club is continuing to cover the arc from the Rebirth era of Nightwing, “The Untouchable.”

Sorry #TeamNightwing, Life has been crazy the past couple weeks so we’re late

. @Nightroia and I haven’t gotten to do the next poll or even decide if we wanted to do something other than a reading. So I think the next best logical solution is to go ahead with the runner up from the last poll, personally my favorite Nightwing story to date… Drum roll please? uh… no? Not this time you say? Okay, I guess we’re going without one today. [The Untouchable] Nightwi…

Over at Harley’s Crew, the group is just about finished covering the acclaimed mini-series Harleen!

“The road to hell is paved with good intentions. On that road I saw a pale man, and he smiled at me…” Welcome to Harleen, everyone! [image] HARLEEN 1-3

Rated 17+ Dr. Quinzel believes she’s found a cure for madness, and as she aims to heal the fractured minds and souls of Gotham, will become the one thing she never expected: one of them. Join us for her decent, and the rise of Harley Quinn.

Over at the Birds of Prey Club, they’re spotlighting some classic series featuring Black Canary, Oracle, Huntress and Catwoman, specifically Green Arrow: The Longbow Hunters and Birds of Prey: Manhunt.

Hey birdwatchers! It’s time for another special mission! This time we’re focusing on Black Canary for our Spotlight. But, in addition, we are also looking at some early Birds of Prey Team-ups with the Black Canary/Oracle one-shot that started it all and the Manhunt mini-series! These were the first few issues that would directly lead into the first epic ongoing Birds of Prey series!

[image] Hello, Justice League-loving metal maniacs! I hope you’re ready to bang your heads, because as we get ever closer to the March 18th debut of Zack Snyder’s Justice League on HBO Max, this week is all about Scott Snyder and METAL! Dark Nights: Metal that is! Yeah, bang your head! BANG IT!

[image] Put down your copy of Thrasher and check the following rad mag out:

Read: Dark Nights: Metal The core storyline is the focus for this week, but if you want to read …

Also, over at the House of Horror, they’re covering the story “The Tenth Circle,” by the big Marvel team of Chris Claremont and John Byrne!

[Justice League Horrors 2] Greetings Horror Hounds! I hope everyone is doing great. There has been a lot of hopeful news regarding the multiple vaccines and the weather is slowly changing for warmer temperatures. Needless to say, I have been in a great mood the past few days. On top of that, the new Snyder Cut is inching its way to release on HBOMax. What better way to get in the mood for a new version of Justice League? Justice League horror-themed comics!!! Before we begin with the fun, fi…

And there isn’t a link for it yet, but there’s going to be a REALLY cool new club related to some of our stuff coming tomorrow that you’ll want to take a look at…!

Ah, the all-time classic “Batman is a Jerk” story.

It’s been a long time since I’ve read this one. I remember thinking it was very good. If I remember correctly, the plot shares some similarities with the animated film Justice League: Doom.

I am reading this via my old TPB which also includes JLA Secret Files 3 and JLA 80-Page Giant 1. 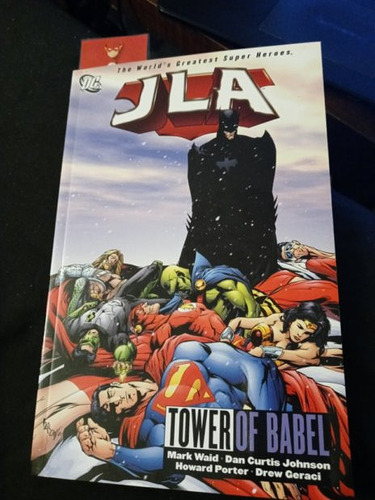 image464×618 79.2 KB
It just so happened that I get to live my best life as I do this as Spotify has decided that I should listen to mid-90s Madonna and I cannot complain about that decision that the algorithm gods have made for me.

Edit:
Just finished reading this. It has been a while since I have read Tower of Babel. Overall, there is a lot of fun to be had in these pages but Batman does come off umm, too Batman-like. In the TPB I have there were “bonus” stories for the conclusion that features Oracle complaining to Batman about his actions and how the Bat Family is being affected. As for the story itself, I really enjoyed Talia’s role. The way she gathered data and then the realization that she was being used by her father. Priceless.

Ah, the all-time classic “Batman is a Jerk” story.

True, though really Ra’s is the bigger jerk here.

If I remember correctly, the plot shares some similarities with the animated film Justice League: Doom.

Yeah, they tweaked it to add a Legion of Doom in there, but I think it even lists the book in their credits as “based on the comic book.”

I am reading this via my old TPB which also includes JLA Secret Files 3 and JLA 80-Page Giant 1.

I have that one too! Though sadly I’m pretty sure mine is still in storage, like a lot of my comics and trades.

I was also surprised to find out that wasn’t a cover to one of these issues at all, since I link that image so much to the Tower of Babel story.

It’s also interesting seeing Porter’s art from the early 00s and comparing it to his art style of today. For those who don’t know, Porter was out of the comics biz for a while because he injured his dominant drawing hand, pretty much lost the ability to use his right thumb, so he had to relearn how to draw again using only his fingers. Insane. For comparison, here’s a cover he did for the recent Deluxe Edition of this story: 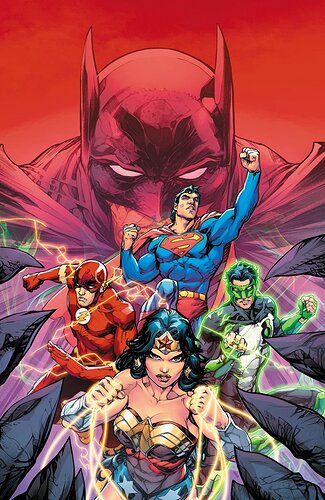 And there isn’t a link for it yet, but there’s going to be a REALLY cool new club related to some of our stuff coming tomorrow that you’ll want to take a look at…!

Have the details of this been released yet?

By the by, thanks for the shout-out.

Oh, I was talking about the DC Book Club, they started yesterday with Justice League: The Totality.

Club Owner’s Note, 4.8.21: Thank you, to all our 900 DC Book Club members, for joining our very first installment to discuss JUSTICE LEAGUE: THE TOTALITY! If you’re still catching up on the reading, no problem at all! This is an ongoing discussion, and you can join in at any time

One day. One day…

That’s super impressive that he drew that without using his thumb. Wow!

Having finished my reread earlier today I still think this arc is really good. There were some plot points I had forgotten about that surprised me a little bit (mainly that the ending wasn’t the League destroying the tower; I totally forgot about the bioweapon). I think the writer, Waid, did a really good job balancing all the characters and giving them each their own voice.

One thing that bugs me a little about Batman’s traps here is that several of them would be been fatal without others intervening. That doesn’t fit Batman’s character. I’m thinking that we are to believe that Ra’s altered Batman’s plans to make them more deadly, but I would like to hear other thoughts on this.

Should Batman be kicked out of the Justice League?

Or Crisis Book Club. Where we read and discuss every crisis/event.

This was a great title and is want the animated Justice League “Doom” was based on. It’s been a while since I’ve read this one too, but I remember liking this better than the movie, subtle differences like, GL is Kyle rather than Hal. Now, i’ve gotta reread this one. But certainly a great title.