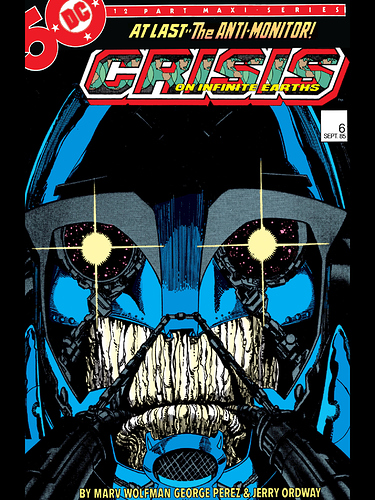 image1536×2048 2.35 MB
It’s not just universes that live and die in Crisis on Infinite Earths, this series killed DC characters from the iconic to the barely remembered and introduced more to the main DC Universe. This month’s “Vote and Defend” focuses on those deaths and introductions with four questions. As always, vote in the polls and defend your votes below.

A poll question from @jgjusmc. The deaths of Supergirl and the Flash in issue #7 and #8 are certainly the two most historically important up to that point in DC’s history. Which of these deaths had the greatest impact at that time?

Crisis opens with the surprisingly heroic deaths of Earth 3’s Crime Syndicate with writer Marv Wolfman was using them as stand-ins for the Justice League to establish the seriousness of the threat. Which of the following characters was most important to DC’s history prior to their demise?

Just when the reader might think it’s safe, Crisis #12 results in the deaths of 10 characters. Which of these heroes was most important to DC’s history prior #12 climatic battle?

Wolfman and Perez used COIE to introduce Charlton characters to DC and bring Quality and Fawcett characters from their respective Earths into the mainstream of the DCU. Which of the following “Acquired Tastes” would go on to have the biggest impact on DC comics? (For more on these heroes check out the Acquired Tastes book club).

And don’t forget, the wider discussion on COIE is still open.

[image] Welcome to another edition of the DC History Club where each month we explore the story behind the stories from 80 years of the greatest superheroes in print and on the screen. This month we will join the Crisis of Infinite Clubs crossover as we research and discuss the 1985-86 series Crisis on Infinite Earths . We will be focusing on why DC decided worlds must die, how its creators implemented this multiverse shattering event, and the impact COIE had on DC and comic books in general. …

My vote was for The Flash’s death having the biggest impact on DC at the time. Wally took over and was the Flash whom an entire generation grew up on; in many ways he surpassed Barry Allen. Another reason I believe Barry’s death was the most impactful to DC canon and the real life publishing initiative at the time, is because Barry’s death lasted over 20 years, which certainly ranks longer than most main character “deaths”

For Supergirl and the Flash, killing off a major character like that was fairly unprecedented, so Supergirl has an advantage just by being first, but overall, she was a supporting “family” character who’d only recently gotten a title to herself. The Flash, on the other hand, headlined one of DC’s staple titles for decades. I think his death more than anything else broke the assumption that superhero stories are necessarily about preserving the status quo.

For the second poll, I chose Ultraman. Honestly, most of these characters are mainly known as part of a large group, so it’s kind of hard to pick a single one when the whole group is really more important. However, the Crime Syndicate is interesting as one of the first times DC created a world of the multiverse purely as a storytelling tool rather than a retcon to explain continuity.

As for the Crisis #12 casualties, I have to go with Earth-2 Robin. He was the first superhero sidekick. I can’t say any of the others has an equivalent significance.

I haven’t completely decided on Supergirl/Flash. Like @BatJamags notes, Supergirl feels more like an auxiliary character of Superman, but that cover counts for something.
The one I’m voting on right now is Blue Beetle for new characters. The Big Red Cheese may be more famous but between Justice League International, Blue and Gold, his death at the hands of Max Lord, and the legacy character of Jaime Reyes/Blue Beetle it’s clear win for me.

Flash
Starter of the Silver Age so he should be given the honor of ending it with his death.
His Title contained first story of the multiverse with Jay Garrick of Earth.Two so again appropriate he be in the last multiverse story
Had a successor who could inherit his legacy
Wally West
Who was THE Flash for the next 23 years
including Justice League member in Morrison’s JLA AND Justice League Animation
It was thought his death was permanent and again lasted 23 years

Ultraman
Because of the way he went out, rushing toward toward his death as he says, “Fighting to the end.”

Robin
was the original Robin, created in 1940. The first kid sidekick. The stories of Batman and Robin.in the Golden.Age are his. Also if the JSA members were in their 60s in 1985, he was probably in his late 40s, far from his prime. He was also one of the exact duplicates unlike Flash or Green Lantern, without powers and needed to be elimated for the stated purpose of reducing complexity in the DC Universe

I so wanted to vote Supergirl because she’s such a great character in her own right and part of one of the most iconic covers of all time. But, Flash launched the age that dies here. Went Flash.

I’d like to hear from some of the Supergirl voters. Great character, but what tipped the scales for you?

I would say that Supergirl’s death had more impact.

Flash had a successor ready.

Supergirl was one of DCs few really powerful females in an otherwise male dominated roster. The loss of her was a setback for the hobby. To this day comic books and movies have the gender representation of a 70s board room.

Would keeping Kara around have changed that? No, probably not - there are probably too powerful forces at work wanting the current status quo. But what if they instead of erasing her had done what they are doing today at CW and tried harder? What if the amazing Smallville writers had written a Supergirl story instead? Thanks to CW we have some 1.6 million Supergirl viewers. That in my mind is a giant leap for an industry that still have miles to go.

They took a step back when they should have been running in the other direction.

Powerful defense for Supergirl’s death being the more impactful from @Coville. Though I’d argue that DC’s line does not “look like a 70s board room” but you could certainly take that complaint up with the MCU.

Well, here is the last decade of DC Movies:

I don’t think there is need to have to go Marvel to see that something is still completely broken in comics.

@Coville
BvS that’s no cameo
You missed Suicide Squad, mixed crew prominent female characters
Looking forward:
Birds
WW 1984
New Gods helmed by a female creator
TV:
Supergirl
Batwoman
Legends
Green Arrow and the Canaries
Clark and Lois
Books: so roughly 25% female led
JL Dark female led
Outsiders gets female leader in March
Outside of mainstream DCU:
Super Hero Girls
A whole lot of YA targeted graphic novels that seem to be primarily about and targeting females
If not to be broken your definition is parity this falls well short, but DC’s commitment to and success with female led, created and targeted product is noteworthy. I think your point that this could have happened earlier with a more concerted effort including Supergirl is spot on.

So, Marv Wolfman says he argued against killing Barry Allen. He didn’t want to do it, so he keeps putting it off. He kills Kara, with the sacrifice in battle and the cover and the reader thinks that’s the big death, just more d-listers. Then Barry literally runs himself to death to stop the Anti-Monitor. That’s a heck of a one-two punch.

Which of these deaths had the greatest impact at that time ?

The question is which had the most impact at that time. Do you mean in comics or in the real world? I would have to go with Supergirl. Her death completely overshadowed Flash’s. Her death is the one everyone talked about at the time. Her death is also the iconic imagery used when talking about Crisis. Flash also had a successor to fill his role as Flash, while the “Supergirls” that came after Kara were just not really able to fill that void left by the Maiden of Might.

@nu52 once I put the question out there, I let everyone interpret in their own way. I do think your right, the Supergirl death was the story. While we hoped Flash would make it out alive, his death had been foreshadowed for months, taking a little of the shock away.

We’ve had a couple explanations for picking Blue Beetle for new characters, any Captain Marvel voters want to pitch in? Or Captain Atom, or Freedom Fighters?

Flash also had a successor to fill his role as Flash,

This is why I picked the Flash, because his death had an immediate impact on the stories themselves. Having Wally replace him right away led to a new generation’s Flash, which was the first of a while new generation of heroes.

Also, the DCU moved on from Kara pretty really quickly after her death, it really didn’t have much impact within the stories themselves because they rebooted Superman and everyone just forgot about Kara.

This is why I picked the Flash, because his death had an immediate impact on the stories themselves. Having Wally replace him right away led to a new generation’s Flash, which was the first of a while new generation of heroes.

Also, the DCU moved on from Kara pretty really quickly after her death, it really didn’t have much impact within the stories themselves because they rebooted Superman and everyone just forgot about Kara.

Everything you mentioned is why I believe Kara’s was more impactful. The Flash continued. To the general public following the event at the time, Flash was still there. Supergirl was just gone. Her presence was huge and then she was just gone. Supergirl’s death was what people were talking about at the time. I remember watching an interview or a documentary where people that were following Crisis back then all said Supergirl’s death was the big event. I’m also answering the question about the impact their deaths had in the greater scheme of pop-culture and not in the pages of the comics. I feel like we’re answering different questions because of how we interpreted them