Hi. Thanks for letting me know. I mostly read back issues so I hadn’t known about the delay.

In Supergirl: Being Super , Kara’s new friend Dolly is confident in her identity as a gay young woman. What role do you see her playing in Kara’s life?

I feel that Dolly will help remind Kara to relax every now and then - she seems really laid back and I think that’s going to be important for Kara moving forward becoming a superhero and fighting crime - that type of life can weigh heavily on anyone.

I think it’s interesting to note both of her friends, Dolly and Jen - you have Dolly who is more lax and Jen who is kind of the opposite of that. Did anyone else notice this? I think it might help Kara find her path being in the middle and having a bit more of a moderate personality.

My take First I doubt Dolly is a ‘new friend’ I don’t know if the three best friends have known each other from first grade Or more recently It is clear that they have known each other for years Also Mariko Tamaki Takes a unique approach To these three She excludes all the other students, giving them at best a page of dialogue. Most teen age movies are about status in high school or romantic relationships. That is not the concern of Mariko Tamaki. Except for the track team (of which …

This week’s newsletter containing a gorgeous set of digital downloads and printable bookmarks is here!

We also want to give a very big “hey there hi there” to our newest DCBC members:

Welcome to the party, pals! Don’t hesitate to let us know if you have any questions about the DC Book Club

Welcome to the party, pals!

picks up walkie-talkie, then does his best Alan Rickman/Hans Gruber impression

Al is a badass, and loves to spread the joy of Twinkies.

Welcome to all of our wonderful new-comers!

Welcome to all of the new members! We look forward to getting your perspective on the titles for this months discussion!

That Authority storyline: Interesting, but what the heck lol. Glad to see Midnighter and Apollo get hitched in 2002!

Right?! This was my first time reading that one. It’s not what I’m used to but I really enjoyed it! Did you have a favorite panel?

who is your favorite character? I’d have to go with Swift

I love the no nonsense “I will end you” attitude! Muahaha >:]

Offhand, the easy answer would be Midnighter, because I love how he doesn’t **** around and just GETS. THINGS. DONE.

With a bit more thought into it however, I would say The Engineer. Her visual aesthetic always catches my attention. I’m extremely interested in a live-action movie based on The Authority, so I tend to imagine how she’d look in live-action while I read her in the comics.

I can’t agree more, she has some gorgeous panels - I posted one of my favorites of hers below. I imagine she’d be a very difficult cosplay. 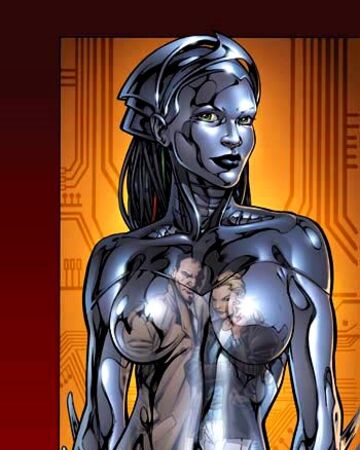 I imagine she’d be a very difficult cosplay.

Have you seen the TV series Heroes of Cosplay?

It was on the Syfy Channel a few years back and very entertaining (and this comes from a guy who has a mild, at best, interest in cosplay). I would have loved to see one of their contestants attempt an Engineer cosplay, because if anyone could, it’d likely be them.

SN about HoC: Chloe Dykstra was a contestant on the show. She’s the daughter of famed visual effects pioneer John Dykstra, who has worked on many well-known movies, including Star Wars and Batman Forever.

I have seen it! I have a soft spot for a lot of Syfy shows along those lines, including Face Off, Hot Set, and Jim Henson’s Creature Shop Challenge. I was hoping for more seasons of it, but I remember it came under some controversy regarding how they portrayed the cosplay scene. Maybe one day they’ll reboot it.

I loved Face Off!

Henson fan I am, I never got into their show, for whatever reason.

Although, a Sci-Fi (back when they spelled it right) Channel show I absolutely love that featured make-up and creature effects by the Henson Company was Farscape. One of my all-time favorite shows.