Should thou seek Wildstorm recommendations, I know a guy.

I have not, but I’m definitely curious to now. That looks like the kind of art I saw all the time as a kid in Wizard magazine.

Divine Right’s first issue (Divine Right # 1/2, which is only digitally available in the trade) debuted in Wizard magazine, so that’s quite fitting.

SN: I miss Wizard. Their last year or three as an attempted overall entertainment mag with a strong focus on comics was hit and miss, but before that…I loved their mag, and read it with reckless abandon as my nerd eyes poured over what was New and Next in the comic scene.

Hey all, need some help identifying a character. I know everyone here except the one at the far back left next to Tasmanian. I recognize Ystina/Shining Knight, Tasmanian Devil, and Midnighter. But who is this other character here? 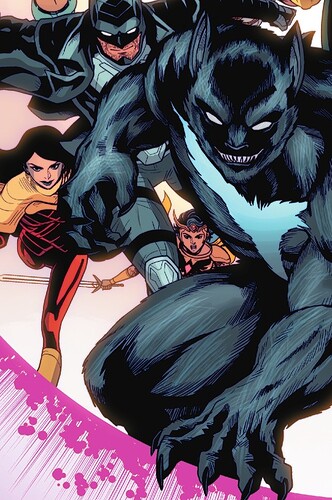 But who is this other character here?

That’s Tremor! Introduced as a member of the Secret Society of Super-Villains in Villains United, and reintroduced as a reformed hero for social justice in The Movement, Tremor is to date the DC Universe’s only self-identifying asexual character.

I’ve been asking for asexual representation in DC comics for a long time, and it’s nice to see they haven’t completely forgotten the one asexual character introduced as such in 2013 (though she hasn’t been seen since 2014). It would have been nice if she got, well, any dialogue in this issue, but baby steps, I suppose.

Thank you so much! Yeah, I’d love to see more asexual representation. Hopefully this issue kicks up enough interest for DC to take notice!

I agree that the trio fits together well in the first issue of this series - Catwoman brings in some hard truths that feel necessary in order to see the Harley and Ivy duo grow as characters (drugging the Riddler and taking over his home, giving away thirty million dollars, shopping at every opportunity, etc all aren’t exactly sustainable long-term), especially if Gotham is getting increasingly dangerous.

It was nice to see the lengths that Ivy would go to in order to ensure that Catwoman wasn’t a threat but at the same time ensuring that others weren’t a threat to Catwoman. Though their approaches to situations may be very different, I think they make for a very effective team alongside Harley (as long as Catwoman isn’t made to compromise herself too much where Batman is involved).

Introduced as a member of the Secret Society of Super-Villains in Villains United, and reintroduced as a reformed hero for social justice in The Movement , Tremor is to date the DC Universe’s only self-identifying asexual character.

Absolutely, humans are not perfect. We all have our little quirks. We make mistakes, we learn from them (or sometimes not). We have our own views, opinions, beliefs etc. Representation should not be one sided, it should show the good, with the bad.

The Movement is a solid read, and a sorely underrated gem of the latter portion of The New 52.

Villains United is also a solid book, and one of the better lead-in minis (of four total) to Infinite Crisis.

She’s a pretty minor background character in Villains United, but gets much more prominence when reintroduced in The Movement, which is also when her asexuality is established. I’d suggest starting there.

Hello, dahlings! We’ve had some new members joining in the past 24 hours, and I wanted to make sure everyone got a chance to catch up on our newsletter for this month’s DC Book Club installment

It includes a brief into, as well as some details on how you can update your profile details and avatar/icon

Hi. I have a dcu subscription but can’t find DC Pride #1. Can you help me access it?

It isn’t accessible on DCU yet. Probably won’t be for a little while. It’s just available for standard digital or physical purchase right now

Pride 1 came out on Tuesday

Though a few titles appear here when they are published

Most appear here
6 months plus 1 week
After publication.

Hi @bob617.85951 - Looks like @sammiekparkland.75611 and @TurokSonOfStone1950 already helped (thanks you two!), but I just wanted to also let ya know that Pride 1 will be on the service in about 6 months, so we’re looking at a nice early Holiday release.

Ah, the Filmation Justice League, as seen in the opening of their shorts seen during the Aquaman TV series. Good, good stuff!