Are you getting Dark Crisis #1 today?

As Blade said when he played baseball, “Yes, yes, yes!”

Today is packed with great new releases, but Dark Crisis #1 is undoubtedly my Book of the Week.

I just finished reading it! I enjoyed it a lot. Hal seems to be playing a major role, which makes me happy. And the art is very pretty.

Finally got to my LCS today to get this, and a bunch of other books that came out this week.

First issue was good. A nice setup for the rest of the event. Poor Jon is trying his best. That page of everyone telling him ‘No’ or ‘Yes’ was pretty funny.

But, um, Beast Boy is gonna be okay, right? Right?

I didn’t see that coming at all.

As a Flash fan and Young Justice fan I might be more excited for the tie-ins on this event though. Which is an event first for me. But we will see what happens as this goes on.

I appreciate the use of the spoiler blur. I haven’t revealed those yet as I’m still almost six months from reading this when it arrives here on DCUI. Based on the reviews from many I am even more excited to get this event started.

No problem! I almost always spoil blur stuff. I know not everyone can read stuff as it releases. And I hate when I get stories spoiled for me so I would hate to accidently do it to someone else.

I hope you enjoy this event when you get to read it!

Also picked it up on release. Pretty good so far. Great set up with some incredible art by Sampere. I have to say, the team we see in this story is one i would honestly buy a book of.

Really wasn’t expecting to like this issue, but it was actually pretty solid. Now just to wait until July 5th…

What was different from what you expected, and why didn’t you expect to enjoy it?

I read that Justice League #75 was the set-up for Dark Crisis, and I didn’t particularly enjoy JL #75. So I was a bit worried by the set-up of the event.

But, um, Beast Boy is gonna be okay, right? Right?

I didn’t see that coming at all.

Maaayyyybe. Have you been reading Teen Titans Academy? Cyborg and Beast Boy were caught in the collapse of Titans Tower in issue #12. To save their lives, Gorilla Gregg and Cybruh combined Cyborg’s tech parts with Beast Boy’s body making them two Titans in one (issues #13-14). Since this made things awkward, in issue #15 Raven used her magic to create an illusion that they both still have separate bodies even though their physical forms are combined. However, what that means isn’t clearly defined. If I were to guess, though, Slade shot at the Beast Boy illusion. Once that illusion fades, he may find that his bullet bounced off of Cyborg’s metal skull. If I’m right, both Beast Boy and Cyborg should be fine… apart from the fact that they have been captured by Slade and the Secret Society.

I’ve only been reading that as it gets on DCUI so I’m not that far yet. But that is interesting to know!

Potential spoilers for Robin and Shadow War coming, but, speaking of Deathstroke, are we all on the same page that

he’s probably possessed? I mean, I’ve always felt that Slade is human garbage and it certainly isn’t out of the ordinary for him to hunt children. However, his actions in Dark Crisis #1 are a bit extreme and there is evidence that they are being fueled by demon possession. During the Lazarus Tournament in the Robin solo book, we learn that Damian’s grandmother, Mother Soul, ran the tournament to strengthen a “Lazarus demon” and have it merge with the champion. 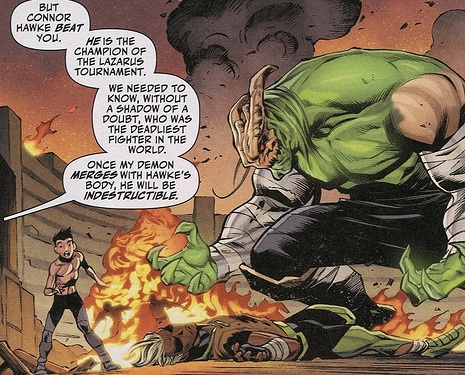 Lazarus Demon665×536 210 KB
Later, during the Shadow War in Deathstroke Inc. #9, Mother Soul is not too broken up to hear that her son, Ra’s, has been murdered. In fact, she is excited that a prophecy is being fulfilled. 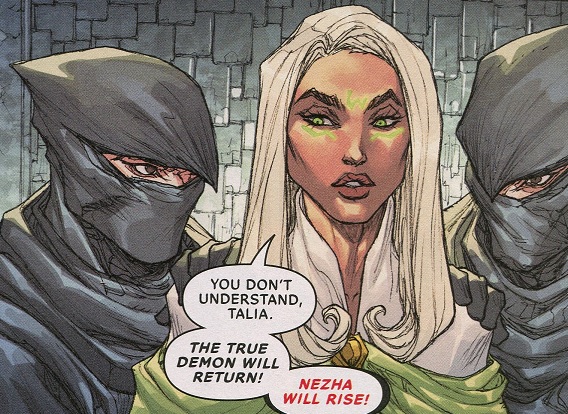 In Shadow War Omega, the Secret Society tosses Slade’s body in a Lazarus Pit to revive him after he was killed by Talia. The Pit reacted in a unique way… 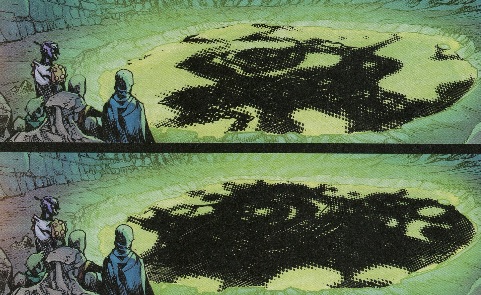 The Pit turned black, hardened, and then Slade emerged vowing to “kill everyone.” Basically, there’s enough evidence here to support the idea that Deathstroke has been possessed by the Lazarus Demon Nezha, and that it is, in part, driving his quest in Dark Crisis to “kill legacy once and for all.”
4 Likes
millernumber1 June 21, 2022, 11:24pm #236

That is a very good thought! I will be very intrigued if you are right!

Well thought out, and you were paying much more attention to those stories than I was.

I want to bookmark this to re-visit it in six months to get in on the fun of speculation. Which issue should I read this theory after?

I would recommend reading Robin #1-14, all of the Shadow War crossover, and then Dark Crisis #1 if you want to catch up before reading my theory.