I don’t actually find that too weird. I was a huge fan of the Batfamily from 2005 up until 2018, but generally thought Batman was a jerk and didn’t like him much. (Tom King converted me to loving Bruce…yes, I think that is REALLY weird.

The Knight has been a really top tier story. Batman Begins is my favorite Batman movie, and I think The Knight, while very different, captures some of the same energy that makes the film so good. 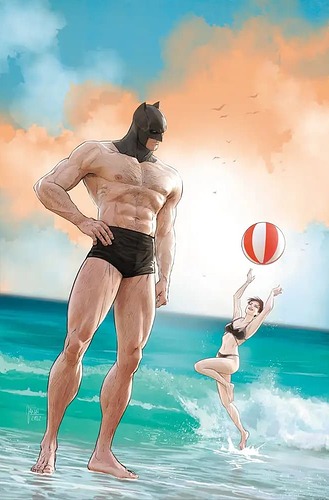 Some pretty great writing by Zdarsky of the Batfamily (though I wonder if it’s going to get some people frustrated like Tom King did with Batman #81), and the final page is a huge WHAM. And interestingly connected to something Ram V is also playing with…

OK, Bruce, next time I see those trunks, they’d better have a bat symbol on them.

It was Zdarsky’s interview on this site that sold me on trying this series. The idea that maybe Batman is starting to let things slip, and that it could snowball on him, well, the storytelling possibilities intrigued me. I have to wait for the second printing of #125 though, as I was too slow to grab it at my LCS.

How do you know that it isn’t on the butt?

I’m very excited to see how it all plays out, given how well Zdarsky has played the long game on Daredevil.

How do you know that it isn’t on the butt?

Then I’d assume that Selina picked them out for him.

I think that I just became a really big fan of this run. Because here comes 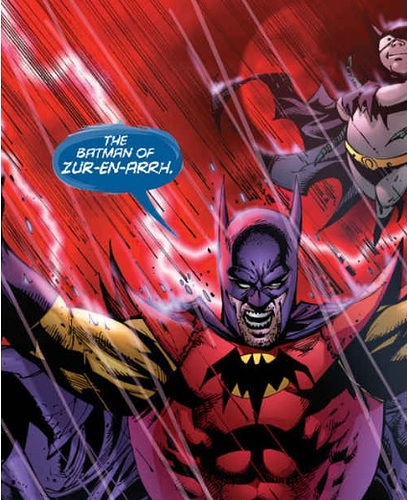 I liked the issue. Finally action the way I like it, with focus on Batman and his team, not 236 other characters like in previous runs. Batmobile! Batarangs! Don’t know much about Batman of Argh, other than it’s some kind of backup persona, but color me interested.

Don’t know much about Batman of Argh, other than it’s some kind of backup persona, but color me interested.

The Batman of Zur-En-Arrh was a Silver Age concept that Grant Morrison revived and reframed for the Batman R.I.P. storyline. That’s what I really loved about Morrison’s Batman, they took elements from the Silver Age that DC and most creators had left for dead and turned those concepts into something meaningful for the modern stories.

While I’m a big fan of James Tynion IV’s run, including several of his new OCs, I do like the way Zdarsky is using the established Batfamily. But we’re only 2 issues in - 2 issues into Tynion and King it was really hard to tell what their runs would become, too!

I have high hopes for this run. Hopefully it gets the Daredevil treatment.

Finished issue 126. This isn’t a spoiler thread so I’ll behave. I really want to know what the deal with Failsafe is, but the Catwoman backup is grabbing me more.

Wait, it’s not a spoiler thread? I need to edit the OP to indicate that it is!

I didn’t see that it was, so I didn’t want to take the chance.

I have updated! Spoil away! (With the blurs!)