What are everyone’s thoughts on the Pride Month one-shot?

You (or anyone) can come talk about it here if ya like!

Hey there, everybody! We’ve got a special selection for you for this round celebrating our favorite ladies in honor of

Oh man, only Justice League Incarnate could have pulled me away from the Pride hub… 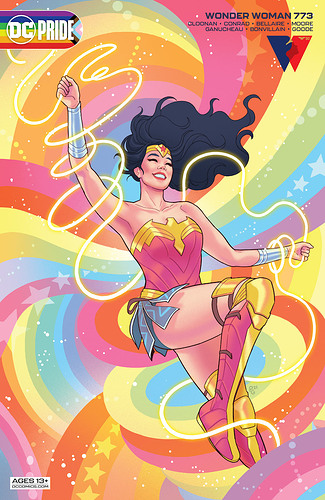 WW 773 pride variant780×1200 307 KB
and also we have the romance currently ongoing in Dark Knights of Steel with Diana and Zala-El (the Supergirl in that universe); additionally, there’s been plenty of other canonical references to Diana’s queerness before these.
1 Like
SV1 June 21, 2022, 2:44pm #47

The Japan one shot from the Midnighter solo is one of my favorite issues ever (albeit I admit there’s a lot of Wildstorm featuring either or both of them that I’ve not ever read since frankly most of it seems like mindless bloody action at first blush, which is never my speed). I’m really disappointed that Jim Lee as COO has done absolutely nothing to encourage DC Entertainment to do anything live action with, for example, Midnighter and Apollo - especially given how much Johns pushed so much of his own work (versus that of other creators), particularly his New 52 runs, on to both the WB Animated, DCW and DC Films content producers.

I think that Japan issue would make a great self-contained either animated or live action movie for DC or HBO Max, and it would not cost anywhere near as much as so many other superhero films spend on CGI, etc.

Which leads us to:

The company clearly refuses to openly acknowledge Diana as queer, probably to avoid alienating homophobic customers from buying merchandise for themselves or their kids. As DC’s oldest LGBTQ+ character, Diana deserves better.

Right, but they also did Superman - not the canonically queer one - and it’s a little weird that two Pride Month anthologies in a row haven’t even obliquely mentioned what is inarguably DC’s most important queer-with-no-asterisks character.

I agree with everything here except for a few things that I have a compulsive need to point out:

T H A N K Y O U. Now how do we get DC to actually respond haha

And yeah … ALLY … It’s pathetic and when the fans pointed it out to the team behind the product they fed it back to WB/DC who ultimately didn’t care. I think more needs to be done/said because this just screams performative allyship from DC imo since they’re more than willing to win GLAAD awards and sell pride comics/merch but they’re too afraid to acknowledge their queerest (and oldest queer character’s) identity. Which really is disrespectful at best of the community they claim to be “celebrating” imo

Dark Knights of Steel may “matter” but ultimately it can easily be written off as Alt-U or “a dream”, even if characters have memories of it, DC can easily just say “yeah but this never happened actually”.

I know, I just take issue with using the word “canon”.

Now how do we get DC to actually respond haha

I have no idea, I’m too busy working on this. The Diana thing is important, but at least DC is being performatively woke. Disney isn’t even ignoring our complaints, they’re being unabashed about their homophobia.

Fair enough regarding the word canon.

With regards to your stance on the Diana thing, here’s an interesting counter: wouldn’t other corporations start being more actively supportive if there was, indeed, an openly LGBT Wonder Woman? The power of that character as a symbol has always transcended media. That’s precisely why DC are so squeamish to acknowledge her queer history and to make it explicit: they’re aware that a lot of people are paying attention to whatever they choose to do with Wonder Woman. Maybe a world with an openly bi/pan Diana is the world in which content like the Owl House doesn’t get cancelled. Just a thought. Good luck with your campaign!

And good luck with all of this as well, and not just because I think, as you say, everyone wins if either (ideally both!) of us do.