lol I just did it, but thank you sir/ma’am also I’m sorry, I didn’t think about that.

Not a bad point. I decided to do the same with my image, even though it’s on the DCU site, just in case.

Almost got it! Try putting the slash inside the brackets.

did it work? Because on my side it’s still clear.

My club recently looked at a Nightwing story that dabbled in body horror, but I’m assuming that you want GOOD stories, not hilariously bad ones. Still, here’s the link:

[Outsiders v3 44] In this session, Jason Todd of the Renegade Robins Club drops the Red Hood getup for a bit and tries on that sweet, sweet Nightwing costume! Don’t get too used to it, though: he dons the hood again in a crossover with the Outsiders! Tell us what you think of these stories below! Join the club today! Click this drop-down menu for some bonus info:

Well I’m willing to take anything.

@AlexanderKnox – I thought of mentioning that too, but that’s less body horror and more body confusion.

Good. This has been more trouble than it’s worth. (Not angry at you)

Well, as Jay and Question mentioned, you really should check out Swamp Thing.

Alan Moore takes over the second series with issue #20, and his first proper arc begins in the next issue. That arc is collected on DC Universe right here:

Is it on the same level as Junji ito’s work?

The 1970s comics are fairly tame, since they had to deal with the Comics Code Authority. The Alan Moore run eventually abandoned the code and paved the way for the Vertigo imprint, so it delivers more horrific imagery. Later creative teams would push it even further. Here’s a cover that I always think of when the Swamp Thing comics come to mind: 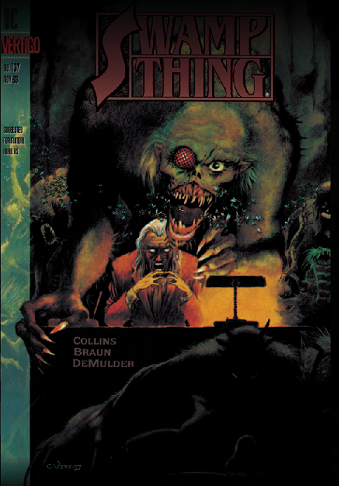 The art is pretty cool

Almost every episode of Batman Beyond lol. I’m watching it right now, and while there are some episodes that don’t involve it, it seems like in order to try to take over Gotham or fight against Terry you must have had some accident happen to you and gain some kind of super power from it. Brainiac Lex in Justice League Unlimited was also a bit weird to me… to… like… “you’re just OK with this??? Alright.” This is more of a watch recommendation rather than a read, but it’s DC.

Yeah but those shows were made for kids so the body horro is really tame when you compare them to Uzumaki. I’m looking for ones that’s on the same level as Uzumaki.

As @AlexanderKnox pointed out, the Comics Code Authority kept that level of body horror out of mainstream western comics for most of the 20th century. It’s only around 2011, when the CCA guidelines were finally abandoned, that you start seeing stuff like Animal Man show up on the shelves. Even then, that’s usually relegated to horror titles, such as the ones found in the Vertigo library- and, today, Black Label.

Come to think of it, the “Death of the Family” story arc has some heavy body horror components, with Joker throughout wearing his own severed face as a mask.

Just started reading the recent Martian Manhunter maxi-series and although not necessarily body “horror”, it does have several shapeshifting scenes reminiscent of the genre.

What a cool thread! Thanks, @American-Alien! Alan Moore’s Swamp Thing has a really great body horror, particularly with Anton Arcane and Matt Cable. Also Brian K. Vaughn’s Swamp Thing run with Tefe is pretty horrific. I think those are in line with Uzumaki.

I have to check out this Animal Man stuff.