Greetings, birders! Welcome to our first round of Team Ups!
First up, we’ve got a 2 issue series that spans a decade, featuring Catwoman and BG. 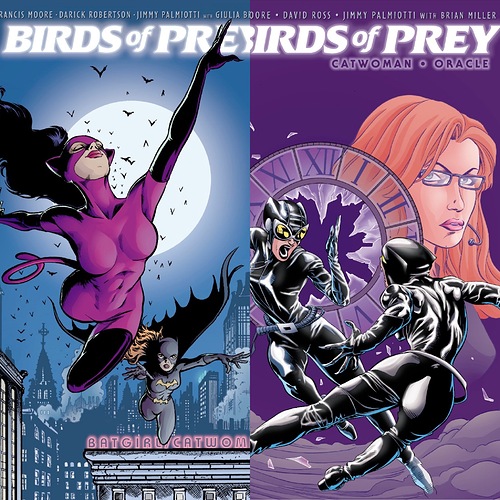 Next we have The Suicide Squad! For any newcomers: In issue #23 we’re first introduced to a voice named “Oracle” in a single panel. We then learn Oracle’s true identity in #38.

These 2 issues explore their new circumstances not long after the events in The Killing Joke. 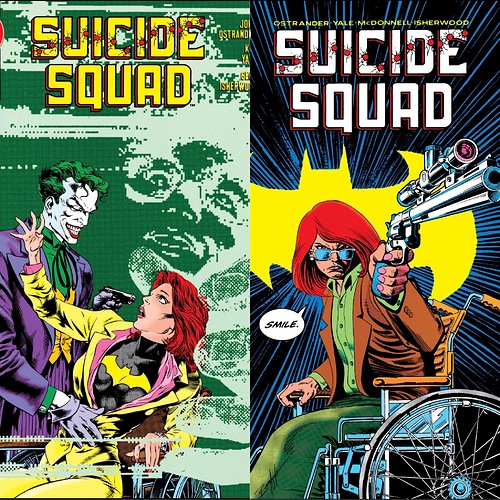 Last, but not least, we’ll be joining Harley’s Crew to read some Black Label that’s just arrived: Harley Quinn and the Birds of Prey 1 & 2 (

You can join or learn more about Birds of Prey HERE or Harley’s Crew HERE.

Birds of Prey: Batgirl/Catwoman/Oracle: I enjoyed this story overall. These two have a great dynamic, imo. I’m always down for some Catwoman, but this definitely works.

I Iiked issue 2 a bit more—felt like it had more weight and flourish to it. Possibly because we see how these ladies have changed over time (including Val) Also because issue 1 feels a touch hurried—like it needed another 20pgs. We’ve got these crimes, and new players, and I wanted to spend a bit more time w/ everyone, so I wish this were at least a 6 issue mini! (#vampire) 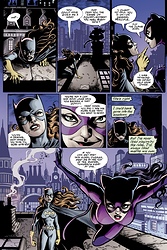 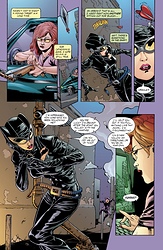 Love exchanges like these. I can’t help but do this

(Not unlike my general reaction to Huntress & Canary) The art worked really well in both respective periods and helped set them apart in the timeline. And the last few pages are pretty great, watching them try to out-swindle each other, lol, but out of…respect, obviously!

I’ll start this one w/ my favorite panel of the week:

)
Suicide Squad: I’ve read these issues several different times. I’d say I t’s a good series a cross the board, but for BG, a lot was hanging in the balance at the time. We have trauma we can’t/shouldn’t ignore (because it’s honest) and a villain we can’t let WIN, so How does she carry on? Here we get the proverbial ‘phoenix rising from the ashes’

and I love this new, grittier identity. She isn’t the only character to suffer or be tortured, but it makes me wonder what would’ve come of BG (and those events) had Ostrander (SS) & Yale (Manhunter) not given her this story?

They approach things w/ some sensitivity here, but it’s all condensed, so they also ended up, perhaps, helping to cement TKJ in history and I’m very torn about that…But I’ll save that rant for another time

prbly later this week! and just end by saying:

BG should be commanding a small army of her own. Its who she’s meant to be, imo. She’s a Gordon, not a Wayne.

This run (and Manhunter) sets her fully on that path, and I approve.

Also, Waller. I’ve rarely liked her character design, and this is one I don’t like, but I always like her on some level, no matter what. I can’t help myself! These issues are likely why. The VR scene was great.

[edit] Because I call it this too and freaked out a little when I was typing up the thread!!

The Story That Shall Not Be Named

Funnily enough, I read the BOP Catwoman/Oracle story a while back when I was looking for Catwoman stories when I did a whole month devoted to her character. Definitely agree that there’s some good dynamics between the two leads, but the two issue length kind of hinders the story.

I think my favorite story with the two is the Catfight arc in Batman Confidential #17-21, by Fabian Nicieza and Kevin MacGuire. 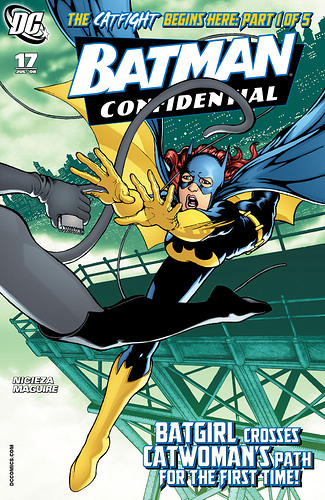 I’ll start with Birds of Prey: Catwoman/Batgirl/Oracle. I’d never read this story before, and was pretty pleasantly surprised by it. I think it was a nice touch to set the first issue during Babs’ Batgirl career and then jump ahead a number of years for her Oracle phase in issue #2. The first issue also really resonated with my recent obsession with Netflix serial killer documentaries. There was a sinister atmosphere to the background of the plot that really hooked me in the same way as those documentaries.

For a two issue series, there was also a surprising amount of depth for the minor characters. Erich Blaque could have been some generic henchman, but his vampiric delusions and obsession with a singer gave him dimensions that most minor villains in a limited series usually don’t have. I would agree with @Razzzcat and @Jay_Kay that this series could have been improved with more issues. They did a great job with two, but there could have been quite a story told with six. All in all, a fun little read and I loved seeing Babs get the better of Selina in the end.

Moving on to Suicide Squad #48-49! As I’ve mentioned before, this is still my favorite volume of Suicide Squad. These issues are firmly in the Kim Yale phase of the volume. When Yale became part of the creative team, there was a shift in that Amanda Waller became the main character of the book and started to seem more sympathetic than she had before. I think that definitely comes across in these issues with Amanda’s struggles to defy the temptations of The Thinker’s helmet and the fact that The Wall ultimately saves the day. All that and you still don’t find Waller less intimidating. That probably makes this era of the volume the most nuanced portrayal of Amanda Waller’s character (that I’ve read so far, anyway).

Also, just to make a brief note as @Razzzcat and I were discussing these issues in the last BoP discussion, there was not one but two potentially problematic street gang scenes in these issues! This volume of the Squad was a cornerstone of the grim, gritty drive DC had in the late 80’s. Things like this do pop up in it regularly. But…I’ve mentioned this trend in the era before, so 'nuff said for now.

Now to move on to Barbara’s role in the story, and please indulge me because I’m going to mention The Story That Shall Not Be Named (TKJ) a bit. Like many, many comic fans my age, I’m an Alan Moore fan. Reading Moore as an awkward, disenfranchised teenager was almost this rite of passage/spiritual awakening. However, when you are that angry, nerdy teenager, you tend to focus on the grim and “mature” elements of Moore’s work. You get distracted by the violence and “mature” themes and almost believe that’s what makes the stories great.

Luckily, now that I’m older I recognize the structural complexities and the humanistic moments in most of Moore’s work (Watchmen, Promethea, Supreme…) that actually make it great. Unfortunately, there really isn’t much to that for The Story That Shall Not Be Named. It’s a story that is driven by its violence and “maturity.” And, as @Razzzcat mentioned last discussion, it’s a story where Babs’ suffering is a plot device for Batman and the Joker’s dynamic.

TKJ is essentially a story for that angry, awkward teenager within many of us comics fans that thinks violence and horror in and of themselves make for a good story.

That’s why, I find the choice of villain for these two Suicide Squad issues perfect. Cliff Carmichael was an awkward, disenfranchised nerd who lashed out by tormenting Ronnie Raymond (Firestorm) in high school. Essentially, Cliff was the kind of guy who would have really enjoyed The Story That Shall Not Be Named. Again, this is just my reading of it and it’s a meta, personal reading of it that is informed by the embarrassment I have over my own history with grim and gritty comic stories. I cannot say this was the actual intention. But… by overcoming Cliff and the urge to kill him… I would argue that Barbara is not just overcoming her own PTSD but is also overcoming the elements and dark, misguided forces in comics that put her in that wheel chair in the first place.

Probably not the true intention behind the story. Still, I could not stop thinking about it after I made the connection…

Okay, finished the Suicide Squad issues. I have to admit, this is my first time reading any of Ostrander’s classic run and they were pretty interesting.

It’s interesting what @TheCosmicMoth said about this more sympathetic take on Amanda Waller because when I was reading it I was struck by how…empathetic and actually honorable she was. Maybe it’s because I’m more used to her modern appearances, but to me, Amanda Waller in a lot of ways is like the Dexter of the DC Universe – she could have easily been the worst supervillain of them all, but she realized she can actually do more, have more power as a wetwork US government employee. I was surprised to see her actually break the Thinker’s helmet, even though she was extremely tempted by it.

Barbara’s appearance in this was also cool, and one that honestly cleared up something I always assumed and didn’t really like. See, I never liked the idea that Oracle sort of got her start with the Suicide Squad. I just didn’t see how a woman who was trained by Batman, raised by Jim Gordon, would willingly work together with a bunch of psychotic supervillains. But after reading this story, I can kind of see why – Amanda not only saved her life, but she also stopped Barbara from crossing a line she vowed never to do, all because of her fear.

And I agree, super creepy vibe from the villain. It’s funny, I was getting Purple Man vibes from the Jessica Jones show from him. I think it’s the way they draw out the name of their marks. “Aaaaamy!” “JESS-I-CAAH!”