will be joining us! (Here’s what else they’re up to this week!) 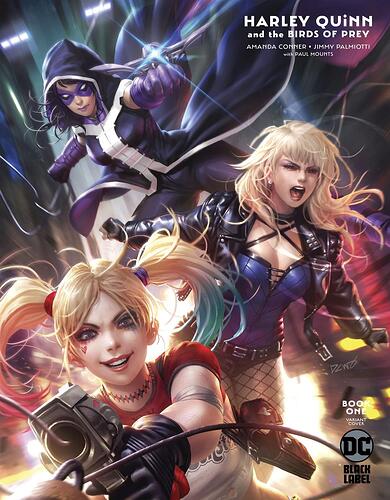 You know the drill: wanna psychoanalyze the characters, discuss the artwork, debate the logistics of a fight scene? This is the place!

REMINDER: This is rated 17+ See ya soon!

You can join or learn more about Birds of Prey

Read this when it came out and it was SO MUCH FUN. Very much looking forward to reading it again with you guys.

I confess that a little of Conner/Palmiotti’s HQ goes a long way for me. I like it, but I’ll read a couple of issues than come back weeks later. But, this series is nearly perfect. Of course, Amanda Conner’s art is genius. Just love her ability to convey action, emotion and comedy all in the same panel with the cutest darn heroes/anti-heroes you’ve ever seen. Then, they’re let off the leash to some extent by being a Black Label book. I think they use this freedom to just the right extent. A few extra ‘F’ bombs, a little more risqué without ever going overboard. Hoping to see more of the full cast in the future issues, but overall very nice.
Bonus: We get good Terra/no-longer Terra. Love her from PG & Terra.

Hey @msgtv! You’re absolutely right about Palmiotti & Conner—being on BL definitely turns things up a few clicks and settles in a good tone for these characters. It’s a fun series so far.

BoP/Harley’s Crew crossover FTW! I hope we all continue reading these issues together as they come out…

The SECOND thing that struck me about these issues was the world it was set in seemed to be a weird mix between the underrated Harley Quinn & The Birds of Prey film and the DCU comic continuity that I’m used to. I really liked that as it played to the characterization strengths found in both the movie and the comics.

These issues also helped in my continued quest to become more familiar with Conner & Palmiotti’s Harley material (as a side note, Conner & Palmiotti also came up in my JSA Book Club reading this week as they did the art/inking for a JSA:Classified, Power Girl story I read). I was introduced to two characters I don’t know too much about yet, the artist formerly known as Terra and Sinn, which further proves that Conner and Palmiotti created their own little corner of the DCU with their work. I like when creators do that.

The only complaint I really have (and it echoes my only complaint with the Harely & BoP movie) is that the Birds only played a bit role in these issues. The story was really focused and driven by Dr. Quinzel with the Birds of Prey only getting really one moment to shine (capturing The Joker). Don’t get me wrong, I love my Harley time. That being said, I also love Huntress, Black Canary, Cassandra Cain, and Montoya. Give them more screen time!

This is a great first couple of issues! The humor is top-notch – risque and ranchy, but without getting gratitous or demeaning. And there’s still some great action, plot and legit drama, like Harley’s bad spat with Ivy and her heart-to-heart with Atlee.

The art is also stellar – Conner is a master storyteller that takes all these different moods and makes them all work together. Her designs are also amazing – I would be totally fine if our BOP characters wore these in the regular comics.

If I can find one nitpick, it’s that I think while of course Harley steals the show, and Renee is a great straight man (ironically) to Harley’s antics, it kind of feels like outside of Cassandra’s funny reactions to the mayhem around her, the other characters of Huntress and Black Canary kind of feel like set dressing. They can have some funny dialogue once in a while, but they haven’t had a chance to really do anything.

Don’t get me wrong, I love my Harley time. That being said, I also love Huntress, Black Canary, Cassandra Cain, and Montoya. Give them more screen time!

This was exactly how I felt. I break for Harls, but I want time w/ the Birds, too. Very much looking forward to the rest of the run—

get to take up more space as it goes on.

And that’s my only complaint—loving everything else.