I wonder, Wally’s currently wearing his Flash Rebirth Suit. If/When Barry comes back from Justice Incarnate to take back the lead, will Wally return to his DC Rebirth suit?

Hopefully, Barry gets lost in neither regions of the multiverse and never comes back. Wally is the Flash!

Unless the movie tanks and the TV series wraps I don’t think there’s much chance of that happening for a few years. (if ever!)
Anyway, I have no problem with Barry and Wally co-existing.
Honestly, the “There’s only room for one Flash in this universe” attitude has never held any validity in my eyes. (Regardless of who is in the running)

I guess I was a little harsh regarding Barry Allen. He was my Flash growing up in the sixties, but I think he went
out in the biggest way possible, saving the universe during Crisis, and DC should have honored his sacrifice. It wasn’t like fandom was demanding his return, but rather DC editorial hated Wally and pushed him aside for Barry’s return.
Wally was unique, he actually replaced his mentor (not even Dick did that) and he should have been allowed to continue his journey. Heck, Wally was a seminal Silver Age DC character and he was discarded into the dust bin of comic history when The New 52 came along. That was criminal.
I am very happy Wally is back and doing well under the auspices of Jeremy Adams.
If DC can find a way to have Wally and Barry co-exist after this next looming crisis (God help us, not again!) so be it. But not at the expense of Wally West.

On that we do agree! I was one of the loudest most vocal supporters for the restoration of Wally West all through the New52. In fact, on several message boards I frequented I posted an almost monthly blog called 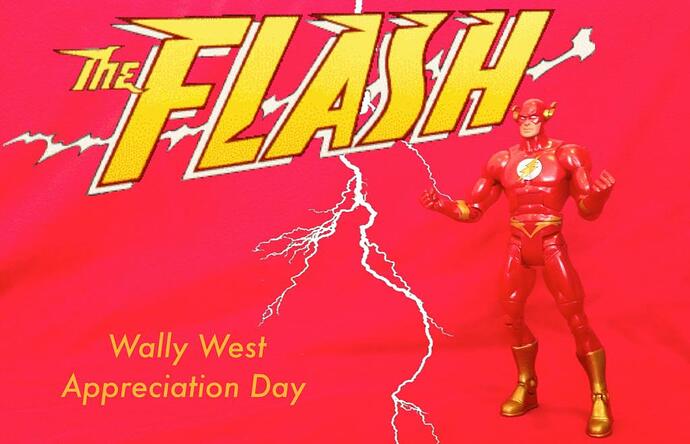 I also petitioned Mattel to do the Wally West Flash figure seen here.
During a Q&A on a message board with one of the guys in charge of the DCUniverse Classics line, I had posted

‘TPTB at DC have basically erased Wally West and his twenty-five years as The Flash from existence (and I’m sure if they had the power they’d erase him from our memories) I ask,…No. I implore you! As a fan, and on behalf of my fellow fans of the wonderful figures you’ve done of the Justice League of America’s members, to show your support for those of us who have been belittled and ignored by DC’s current leadership. Please! Make a DC All-Stars figure of Wally West as THE FLASH!”

I loved your impassioned plea on Wally’s behalf to DC editorial. We need more fans like you!

Current run by Jeremy Adams is wonderful! Focusing on Wally, his relationship with his kids, and some fun connections to other DCU characters has been really engaging! I wish the art was more consistent, but it’s pretty solid.

I love them both! I hate to see one without the other. We had that for years, just Wally. Loved the way Mark Waid carried Wally forward and gave him his due as the rightful heir to the mantel. But I am an original fan and I am glad to see Berry being brought back. It was very hard as a Flash fan to digest his death in the 80’s. So for me there will always be room for both.

I think Barry had a great hero’s sendoff and legacy, so I’m in the camp that he should have stayed the fallen hero. However, I don’t think either character should be removed now. I hope DC finds a way for both characters to successfully co-exist.

So why isn’t the entire Carey Bates run available anywhere? It’s like the longest and arguably most significant run on the character, and there are only a few issues avaliable. What gives?

Welcome to the community @cross.eyed.oni!

Unfortunately, not all comics are able to be added to DCUI immediately due to a variety of reasons - however, we are regularly adding series to the platform. If you see that a comic series you’d like to read is not on DCUI, you can head on over to the thread below and submit a request for it to be added. The moderator team compiles these requests onto a list that we send over to the content team, who are in charge of deciding what gets uploaded to DCUI and when. Feel free to make any requests there!

In the meantime, please don’t hesitate to let the moderator team know if you need anything!

It looks like we’re getting a Flash and Nightwing teamup!

Since it worked last time… I’d like to see Linda have a bit more development as well, both individually and with Wally. I really liked how the last issue balanced Gemworld with Jai’s action log, so the writer can handle character development as well as action/mystery.

Uhm read the new issue of Flash out today…

Linda has a major development!

and also lots of theology!

Nothing new when the Spectre gets involved!
(I loved the John Ostrander/Tom Mandrake run!)

I’m a little torn on Linda getting speed though….
While it was cool to see an Alternate Linda as Lightspeed, having Wally’s Linda be a non speedster, helped keep him grounded. Giving her Super Speed and being part of the act out in the Superhero game is a bit of a little too much… also…did anyone notice Linda’s lightning?..…IT’S RED!!! (that’s never a good sign!)

Yeah, I’m kinda torn too. On the one hand, Lightspeed is an awesome name and she looked cool. On the other, I liked how much Wally had a normal life, even as a non-secret identity super hero. Linda was a big part of that. I do think some of that can just be covered by being parents and such, so powers may not be as critical with the current status quo.

I think I’m more excited by it though, especially if it’s a temporary power up. One of Linda and Wally’s more frequent rifts was the clash between his two worlds. I think that’s been played out, and having a run pull her into superheroics could help tie a bow on that particular issue. Also, the recent Flash runs have made so many other speedsters that another doesn’t really phase me. Bring on the Incredibles and Spider-man: Renew Your Vows vibes! (And don’t hit Linda with a villain bat!)

Man! This book just gets better and better with each new issue! 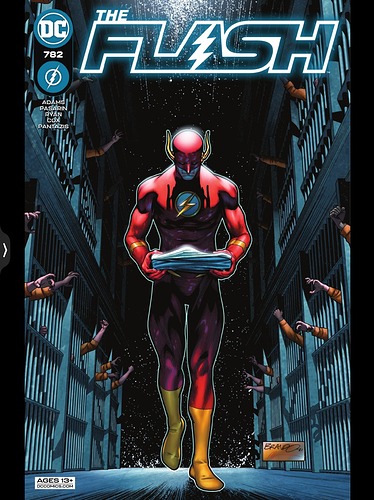 It really does! I’m usually sold on any Flash/Kid Flash team up but I do love Wally and Wallace together. They are only second to Wally and Bart to me.

Linda’s “Yeah, we need to talk.” to the kids was hilarious. Jai was barley phased when she put Irey down. I love this whole family.

Looks like this storyline is getting put on hold for the Dark Crisis storyline though. It’s going to be a bit before Wally finds out about Linda’s powers I guess.

Really good issue! I have to say, I have never been able to get into The Flash before, but this run by Jeremy Adams has been really delightful - I especially love how Wally loves his kids, wife, and cousin.