Post Zero Hour is my favorite as that’s where most of my favorite stories take place, such as Geoff Johns’ runs on both Green Lantern and Teen Titans, No Man’s Land, Hush and I really liked Morrison’s Batman. That being said, I really like what they’re currently doing in Rebirth.

I have been reading DC and Marvel Comics since the early 1960s.

There were always titles in each era that I liked a lot, but I usually bought all of DC and Marvel comics, and the bad ones brought down the best, when trying to go through all of them,

I feel better now that I don’t buy all DC comics and just a few Marvel, but I only started that in Rebirth, when it was a chore to get through every title.

Here is my best eras, and best titles

Golden Age, Art and Story are crude, but there is a raw energy in Batman and Superman, that is lacking in most books today. I bought the last issue of All Star comics 57 for JSA and found it charming. No interest in getting more. Our library is sufficient.

Bronze Age, wasn’t reading at that time, but bought back issues Some of the horror comics were great, including original Swamp Thing. Others titles do not read well today, even Green Lantern/Green Arrow. In NYU Continuing Education class, I took, Denny O’Neil apologized for his non powered Wonder Woman, Superman and Justice League. Len Wein best writer and editor.

New 52 was a period of experimentation, but there were too many titles for too few professional artists and writers, who weren’t given enough time or money or too much editorial interference to stay on titles. Too much cut out, legacy lost. Lois Lane ruined.

Rebirth, legacy reborn but the darkness is coming back, maybe because writers knows they can do what they want, because Doomsday Clock will reboot everything. Still, a lot of energy on half of the titles.

Post Crisis would be mine, but mostly because that’s the era I discovered and fell in love with comics during.

My Favorite era and version of the dc universe would be post crisis(1986-2011).i love the late 90s and early 2000s(Pre Identity Crisis)it was when dc get it right.second choice would be rebirth,although there was some good things from N52 like scott snyder Batman and swamp thing or geoff johns aquaman.and the reason it is post crisis is that was where I get introduce to the dc universe and what i grown up with and have my favorite comic runs and favorite versions of these characters.Pre Crisis have some good stories like green lantern/green arrow,Denny O’Neil & Neal Adams Batman run,Alan Moore Swamp Thing & Marv Wolfman New Teen Titans

Post-Crisis. Probably in large part that I truly became a comic fan and collector (as opposed to just a kid who read comics when I could) around 1988. Post Crisis was when I truly “came up” as a comics fan. So a lot of it is probably nostalgia.

But it felt like the era that truly had the most “history” behind it. Yeah the pre-crisis era was longer but never really embraced continuity even within it’s own books until in most cases the 60’s and never became a “shared universe” until the late 60’s or really the 70’s in the sense things in one book effected and were referenced in the others. And in pre-crisis things really were more self contained stories to a large extent.

The post crisis was when continuity as we know it really became a thing I feel, and while that is true of the later eras they were so much shorter and kept re-booting over and over.

Now obviously the post-crisis is not without it’s soft reboots and conflicting stories and history. But even then at least their fix was not “it’s been 5 years… reboot everything and make it worse”.

Not knocking other eras, all have good stories. But I just feel there was something about the post-crisis that has not been replicated in large part because now DC would rather reboot as soon as possible for a quick jump in sales.

My favorite DC era was initially known as the ‘Silver Age’ with the Writers Gardner Fox, and Broome, and artists Carmine Infantino, Gil Kane, Joe Kubert, Curt Swan, Bill Finger, EditorS Julius Schwarz, Mort Weisenger; then the National Periodical Publications, What DC was called in the Stock market, before it was swallowed up by Time Warner, was the ‘New Look‘ which was distinguished by a ‘checker’ grid on the top of the covers. Flash/ Barry Allen was introduced, Green Lantern/ Hal Jordan, J’onn J’onzz Martian Manhunter, Atom/ Ray Palmer, Hawkman Karter Hol, et al, etc. The sense of excitement and freshness to the stories and the artwork still makes me smile! All my best -

The sense of excitement and freshness to the stories and the artwork still makes me smile!

Welcome to the community, @DrNatCipollina.66004! This is definitely one of the best parts of the comic world.

Please let the moderator team know if you need anything and all the best to you as well.

As a whole I say Post-Crisis, as an age I say Bronze Age.

I’m a Pre-Crisis guy but I still enjoy the other eras.

I grew up with Pre-Crisis but really got invested in JLI.
Post-Crisis was the one time DC actually ‘got it right’ with a reboot.
While there were some blind spots that entered in (Supergirl, Superboy, Hawkman), they did manage to correct them for the most part.

We’ll forget for the moment that ‘if Supergirl didn’t exist, how did she sacrifice herself to the Anti-Monitor?’ Or inspire the new Dr. Light?’
But it was a sign that the pros of Post-Crisis outweighed the cons that stuff like that was ignored by most fans.

Note that while I consider 1986-1994 to be ‘Post-Crisis’, the Post-Crisis era really started to end in 1992 when most of the cornerstone titles began to shift direction and lose the creators they had kept since the era’s start.
The end of the Perez Wonder Woman run and the Giffen/DeMatteis JLI would be two important signifiers.

So hard because pre-crisis had NTT and the best versions of many characters but the writing and dialogue of the times is just… I’m not a fan. Like I should be seeing how painful something is in the art, not reading these long, drawn-out paragraphs about it. Modern comics definite does it better. But modern comics have royally effed up so many characters that I’m just over it.
Post zero hour gave us Chuck Dixon’s Nightwing run and brought back many characters that should’ve never been killed off or replaced in the first place and fixed Supergirl. But it ruined Titans and all the legacy that’s been built over the years which only got worse in New 52 and so on. Rebirth was a great concept but after what a year or 2 went back to the old status quo and undid all the damage control they did in the first place so what was really the point?
And I’m not sure about Post-Crisis.

I enjoy the New 52 best because that was the era when I got into reading comics. I enjoyed how DC made the heroes more relatable, especially Superman. I also loved how they made WW the god of war in her series. Finally, my favorite part of the New 52 was it finally paired Superman with Wonder Woman and gave them their own series.

i like the rebirth era is my favorite dc 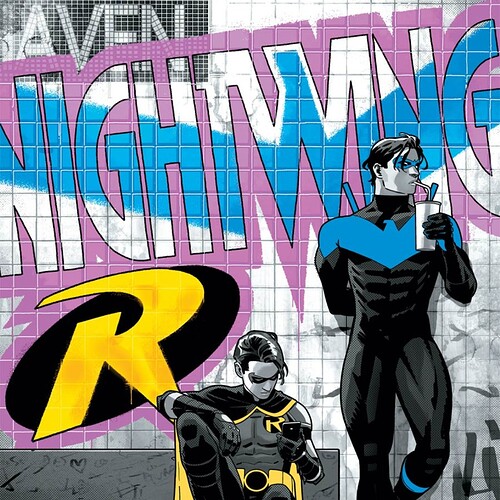