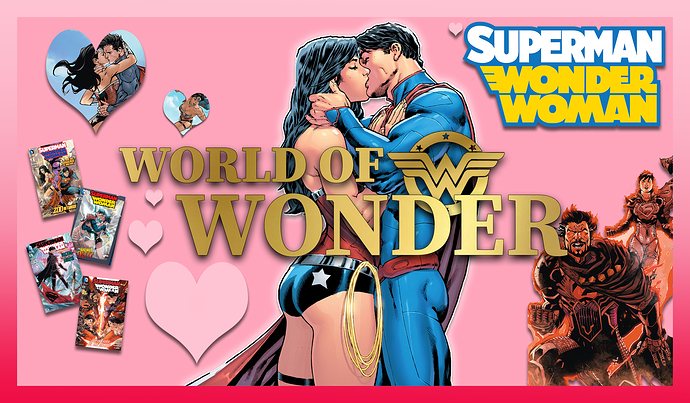 World of Wonder revisits Superman/Wonder Woman! Who will end up victorious when Wonder Woman and Superman go up against Faora and Zod? Join our discussion revolving around two power couples this week!

What to read: SUPERMAN/WONDER WOMAN #3-6 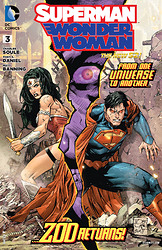 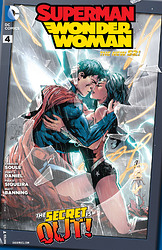 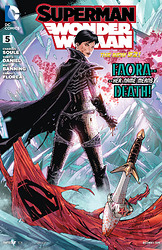 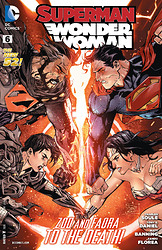 to get a cool flair

Click the image below for a refresher on the first two issues:

Did we cover the first two?

Clicked and scrolled. and I see that it was covered and I commented. I will have to revisit to keep myself fresh.

Yeah, I think I’m gonna have to as well.

But happy to! Been wanting to finish this story for a while, but waited because I knew the club would cover it soon.

I’m probably going to review the original thread. maybe what i wrote will jog my memory.

And I am the same, I like to let the club present the start and finishes to the stories we read. Even during the hiatus. The closest I read anything Wonder Woman related was a Superman Elsewords and that was because of a recommendation on the SuperWonder factor.

I reviewed it too – wow did I tear the New 52 Valentine’s Special a new one!

The debate about mint and chocolate together was also fun.

Actually, it was not. Was trying to find it. which would be easier if i could find my reading history. It’s a Superman solo.

My ignorance of good or bad Chris Claremont (really any writer, I forget to pay attention to the credts) might make me a suitable sounding board. more for the bad, but really for either. And if you are game, we can make it a side read; unless you want to |winkWinkNudgeNudge.gif| the club to do it.

It was Superman: Distant Fires.

my opinion on chocolate and mint together has not changed

I thought it was good – I really like this take on Zod, someone who at this point seems to have more pity for Clark because of how out of touch and lost he is of his own heritage. I also LOVE that we get Faora into the main continuity with this story – I think one of the few things people can agree about in regards to Man of Steel is that Faora was a massive badass, and it was cool to see her used as Wonder Woman’s foil. I just wish she did more after this.

Also, the interactions between Superman and Wonder Woman are great – not just with each other, but with other characters. I like that we get to see them talk about their relationship with other characters like Hessia and Batman. It helps further the humanity and reliability of our two leads.

I just wish the rest of the series got to really examine them more – but sadly between all the Superman events going on at the time, their relationship really started to feel like an afterthought at times. Like literally the next issue of this is a prelude which, while directly following up on the events of this story, almost immediately goes into something much bigger and by that point Wonder Woman just feels like a guest star who’s a little more attached.

It’s clear and concise, and yet still has loads of dynamism. There’s one page that I was particularly struck by, which was 6-9 panels of all our main characters in shadow punching and hitting and reacting, and I was struck by how much it reminded me of Jae Lee, and now I can definitely see more of that style in Daniel’s work in general.

I gotta be on brand, so a team-up (or going against would be pretty interesting too) maybe something like Batman/Catwoman and Harley/Ivy. Both couples have something in common in terms of one being super committed to their mission and the other being more of a seemingly care-free wild card.

Ooh! Bat/Cat with Elongated Man and Sue Digby could be fun. Two detectives trying to out-solve the case together with Selina and Sue roasting them the entire time.

Okay, so some non-Bat ones…Superman/Lois Lane & Flash/Iris West, or specifically, it would be cool to see the two women reporters working together.

Hawkman/Hawkgirl working with a GL couple like Hal and Carol would be cool – a bunch of space cops. OR, if we want it extra spicy, it could be John and Fatality, with John having had a past relationship with Kendra before regaining her memories.

Something with the couple in focus here, Superman/WW with Apollo and Midnighter. Would be fun seeing Clark bristle at the other couples more extreme methods that Diana would be more at home with. Plus, Diana could instantly pick up the parallels between them and Bruce and Clark, which would amuse Diana to no end and Clark would have no idea what she’s talking about.

Okay, maybe I need to stop there before DC sees this and starts getting ideas.

Now that I’m caught up, this edit will be for initial thoughts et al:

I liked how Diana referred to it about being out of her control. I liked how Batman said Clark grew up as a stupid farm boy.

Strife had a meta SuperWonder moment while teasing Apollo about the armor they were wearing and that they held hands to defeat Z&F.

I liked Superman’s confidence should he have square off against Apollo in the future.

I am very curious to Zod’s actual agenda. I liked his dynamic with Faora. More so, Faora’s return guff/sass.

I reread the whole thing too.
No bright thoughts as I thumb away here at the IPad. But, I like the Zod’s love for Faora was at least some of his motivation. Even evil murdering would be dictators need love. Actually, it just makes villains less 2D when you give them fuller lives.

I should do my official entry…

As far as double dates go, what are your thoughts on this story?
there is a soapy-ness that I found myself getting into. I liked Luthor’s reaction to the leaked news. And I want to know who leaked it and why.

The Zod/Faora foil adds to the soap, or my soap at least. Their dynamic is romantic, but he is still her commanding officer. And there is a mission to complete.

What did you enjoy about the action/art?
For some reason, I like how Clark’s face is drawn. Same as for Superman. The art itself is great, but I don’t usually linger over it and I should ‘like drink it in’ more often. I am also more invested in the SuperWonder, which is probably the most active this passive shipper is ever going to get.

What are some other DC couples you would enjoy teaming up/going up against one another?

Particularly from the point of view of the Lane/West(-Allen) reporter team up.

And really, who’s going to say no to Bat/Cat & H&I? Which would have its own extra layer since all those ladies are also known as the Gotham City Sirens, yes?

Couple of thoughts,
While I like the art a lot, I think Diana’s face is too petite looking with smaller features. I like when she looks more Greek in her facial features
I also like the Clark and cat website idea. It’s what a lot of journalists do now and it give Clark more freedom. I know we can’t drop the Daily Planet, but this feels like a good idea

This is my first Wonder Woman series I’m reading since joining DC Universe Infinite yesterday. I’m enjoying the heartfelt moments between them, and how sometimes Wonder Woman just needs to kick butt. Wonder Woman looks really beautiful throughout the pages, as I feel a lot of attention went into her facial expressions and her outfits. About other power couples, I’m not sure. I still need to read a lot of the Batman/Catwoman stuff.

I agree with you! The art in this series is very expressive. I like that you can tell what a character is feeling before even reading the words. There is a ton to read regarding Batman/Catwoman. You’ll be in for a treat. How are you finding DC Universe Infinite?

Hey, @nu52 . Nice to meet you. It’s fun to join the Wonder Woman community here. I am enjoying my time using DC Universe Infinite so far. Once I got used to searching for specific comics, like the Superman Doomed story arc that I just finished, things went more smoothly. You’re right about emotion found in the artwork. I’m in awe a lot of the time because of how the artwork stands out in the series. Superman’s transition into “Super Doom” is also amazing.

I like Batman on his own, you know, but when he teams up with Catwoman and they play off each other, I like that kind of thing a little better.

Nice to meet you too! Seeing Super Doom for the first time was wild. What a unique take on the Superman/Doomsday battle. You’re right though. Like most websites, it really comes down to getting the navigation down.

Batman is such a good character, but his supporting cast of allies and villains really make the Bat stories that much more interesting. He’s got some of the best supporting characters in all of fiction.