Welcome, Bat-fans! But what’s this, “world of what-now?” That’s right, in celebration of his newly relased solo film (you might have heard of it, though it’s been pretty quiet, it’s been doing pretty well at the box office), THE JOKER has taken over the Book Club for the month of October!

Specifically, with this month I plan on bringing not only more obscure or less well-known stories, and specifically books where Joker himself is more of the focus, with as little Batman involvement as possible – this week’s selection is probably going to be the most we’ll see of the Dark Knight this month!

And what is this week’s selection, you may ask? We’re going to be reading Batman Confidential #7-12, the arc called Lovers & Madmen, written by acclaimed screenwriter Michael Green and famed artist Denys Cowan!

One is a detective, who’s strength and reason has created such a dent in crime that he borders on the overconfident. The other is a master criminal who is so skilled at the craft that he starting to become bored and restless. When the two finally clash, it will cause a chain of events that will irrecoverably change both men’s lives forever.

Of course, any other thoughts, questions, and bad knock knock jokes are welcome, if not encouraged!

First issue of this arc can be found here: DC Universe

And if, after you’re finished with this week’s selection, you still feel in a…happy mood, let’s offer a little EXTRA CREDIT.

For this I will offer The Brave & The Bold (2007) #31, written by J. Michael Straczynski and drawn by Chad Hardin and Justiniano! When The Joker is found to have a fatal brain condition, only one man is capable of administering a possible cure to save the madman’s life…Ray Palmer, aka The Atom! Will Ray save the life of the mass murdering clown, and will he come out of The Joker’s brain the same?

Link to the issue can be found here: DC Universe

Looking forward to talking about these books with my fellow clowns! Happy reading! 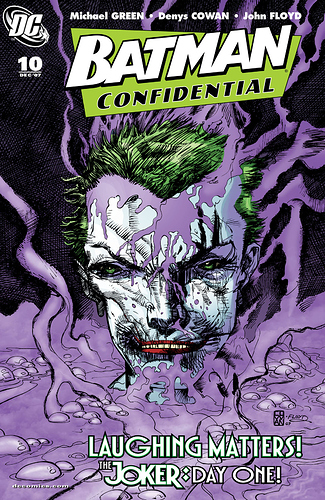 @Jay_Kay Reminder the comunity will be down for the next two weeks, so the book club won’t work. The DCU Book Club Server will be available for you to use in the down time. I’ve already taken time to set things up for you.

…Dang, I forgot to put that in and the Discord link! Oh well, I’ll do it here.

Once the Community goes down for renovations, anyone who wants to keep going can give with the yak-yaks over on the DCU Book Club Discord. There are instructions on how to get into whichever club you want to frequent in.

Hope this brings more people to this story because I think it’s severely underrated and overlooked. One of my favorite Joker stories.

I wasn’t so keen on the art, but i did like it as a Joker origin as well as some insight to Batman’s early career.

And who is Dupin?

Yeah, I think it’s fair to say that this isn’t Cowan’s best art I’ve seen, but he’s had some amazing work in the past. He’is probably most famous for his landmark run on The Question in the 80s with Denny O’Neil (and he’s going to be returning to the character next year with Jeff Lemire for The Question: The Deaths of Vic Sage) as well as the Blind Justice arc in Detective Comics by Batman '89 screenwriter Sam Hamm that introduced Henri Ducard (and may or may not be on my short list for future book club entries after the Joker themed month). He was also one of the co-creators of Milestone Comics.

I wonder why his art feels a little more uneven in this arc. Maybe there was a degree of being rushed, or a different inker? He’s been posting some of his recent work on Twitter lately and it’s a marked improvement. 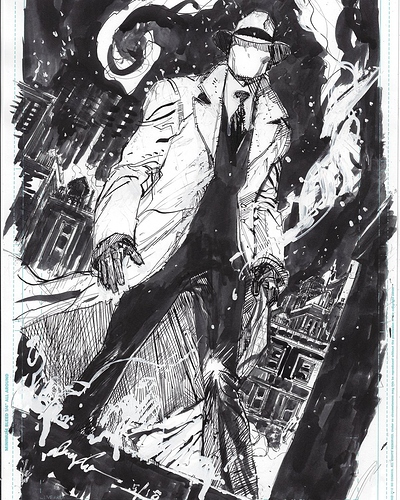 Also, I have to admit, I read this like a month or two back so I’m missing a few details, what do you mean by Dupin, @AntLeon?

“Lovers and Madmen” is okay, but it’s certainly not my go-to Joker origin. I prefer the idea that the Joker started off as a gangster and not as a sympathetic everyman, but this story lacks the finesse of The Killing Joke. It’s also one of those “Bruce just needs to find the right girl” stories, and they were feeling old hat by the time this story came out.

The story with the Atom is entertaining, but I did groan a little at the panel that lifted a scene from The Dark Knight.

I agree that the girlfriend they try to give Bruce doesn’t really wow me. Even if I wasn’t totally biased towards other love interests (hint, she uses a whip and wears skintight leather), there’s not a whole lot to her until the end where she ends up hating Batman for what happened.

The TDK homage was pretty obvious, but I suppose it’s not impossible that at one point Bruce was tempted to turn Joker into clown juice on his windshield.

@Jay_Kay When Alfred is building the proverbial Bat Computer, Bruce wants to know why it isn’t ready, and Alfred explains that he’s building something that has never been built before and in that explanation, he suggests they name it otherwise they might start calling it the “bat computer”. so after Bruce’s hero, Alfred called it “Dupin”. Even Bruce started calling it Dupin.

I decided no to go for extra credit

I did like the final scene with Lorna, where the madman she is referring to is The Batman. her purpose in the story is more about how Bruce can’t indulge in civilian attachments and all that.

I also liked seeing Leenie before she was a psychiatrist; I’m guessing Joker paid her med school.

This arc also provided us with an origin to Arkham Asylum and Batman’s conversation with Crane from “you are real” to “someone out there is laughing at you” set up what followed.

I just looked it up, and “Dupin” is likely a take on C. Auguste Dupin, a regular character of some of Edgar Allan Poe’s short stories. He’s basically Sherlock Holmes before Sherlock was even a thing, a private detective before the word “detective” was even coined.

It’s funny you mention the Arkham Asylum origin, because that does play a role into a future book for this themed month…

And since the Community closes later on tonight for renovations, I’d like to remind everyone that this Book Club and all the others here in the DCU Community will be keeping the party going over on the DCU Book Club Discord! If you want to join up and keep things going, just go to the following link, and follow the (thankfully short and simple) instructions there!

I just find this to be a more interesting, more layered, and more believable origin story than the Killing Joke. The one bad day line is a good line, but I think it’s more believable that it take more than that to create the Joker. As conveyed by this story and also very effectively by the new Joker film. The failed comedian, one bad day, acid bath feels unoriginal, one-dimensional, and less believable by comparison. And I love the Killing Joke, I’ve just never liked the origin it presents.

I also love how Lovers and Madmen ties Bruce to the creation of the Joker, why Bruce is responsible for the Joker, and why he will never kill the Joker. Because it’s Bruce’s attempt to “kill” him that creates the Joker. It establishes that relationship maybe better than any other story, at least for me.

What I do like about this iteration of the man who would become The Joker is that while we see him as a master criminal beforehand, I don’t recall there being much if any information on how he got to this place. It fleshes out a good chunk of what he was before being The Joker, but still leaves a lot of room for interpretation, of how he got to that place.

I’m always on the lookout for good Joker stories, I will try to find time to do the book club questions before the great and temporary darkness descends onto the forums.

@iJest, welcome aboard! If you don’t make it to tonight and want to talk this story and others I’ve been planning for the month of October, you can check out the DCU Book Club Discord here: https://discord.gg/wu2Uxz

@Jay_Kay thanks for looking that up. wrt Arkham, is it funny ha-ha or funny peculiar?