Hello and welcome to another edition of the World of Bats, the Batman Book Club!

This week will be the last week of our “Pride Month,” exploring some of the great LGBT+ characters that are in Gotham City. We’ve mostly focused on Kate Kane/Batwoman, and while she does have a small role, this week we’re going with someone strikingly different, exploring a new hero named Violet Page in Mother Panic #1-6. This Young Animal book is written by Jody Houser, with art by Tommy Lee Edwards and Shawn Crystal. It also includes the back-up story “Gotham Radio,” written by Jim Krueger and art by Phil Hester. 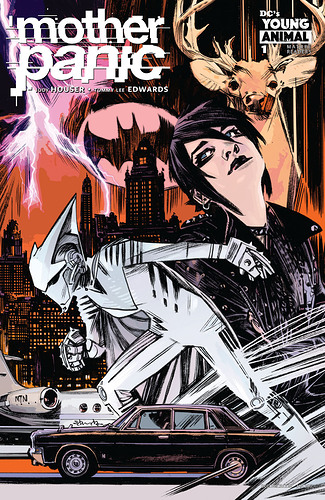 The shadow of the Bat falls over all of Gotham City, from its dark alleys to its glittering high-rises. But a new vigilante has just stepped away from that shadow, and she has her own brand of violent retribution to deal out to the city’s corrupt elites.

Meet Violet Paige, a rich young celebutante with a bad attitude and a worse reputation. No one would ever suspect that this tabloid-fodder wild child has a secret hidden beneath her spoiled heiress exterior—a secret that has driven her to become the terrifying force of vengeance against her privileged peers known as Mother Panic!

But even as Violet launches her all-out assault on the rich and twisted, her shaky allies threaten to betray her, and every one of Gotham’s guardians—from Batwoman to the Dark Knight himself—is hot on her trail. Will Mother Panic continue to strike terror into her enemies’ hearts? Or will her violent quest for justice reach an equally violent end?

Let us know what you think of this series! Looking forward to hearing your thoughts.

Two issues now, I will definitely read all 12. It’s an interesting update on the Batman idea, more violent, a young woman, her Civilian ID isn’t as much of a disguise as Bruce is for Batman. Just a cool vibe.

I can’t wait to reread this. I read it as it came out originally, which overlapped with Houser’s Faith (Valiant) run. I don’t remember which one I was reading, but one month I think an issue of each came out on the same day and I read them close enough together to finally register that the same author’s name was on both series. Both are magnificent, but so different in tone - that is how I learned who Jody Houser is. (Shortly thereafter I learned she will trade autographs for cool RPG dice.) She also wrote the Poe Dameron Annual (Marvel) for Soule’s ongoing around the same time (and bunch of other Star Wars stuff since). She’s one of my favorites now.

(Shortly thereafter I learned she will trade autographs for cool RPG dice.)

Yeah, in terms of her other work, I think the only other book of hers I’ve read was her Harley Quinn and Poison Ivy mini, which I thought was pretty decent for what was likely an editorial mandated story.

This also reminds me I need to get into some of that Valiant stuff – I got a whole bunch of the first series of it on Humble Bundle a while back. Looking at her history of books, I may check out her Black Widow mini she did recently, as I’m putting myself on a Natasha kick in anticipation for her solo movie.