This week we’ll be going back to the world of the 90s and the epic that was Knightfall! We’ll be reading these issues from the two tracks of the KnightQuest storyline, The Crusade and The Search (and they say comic books are too complicated! 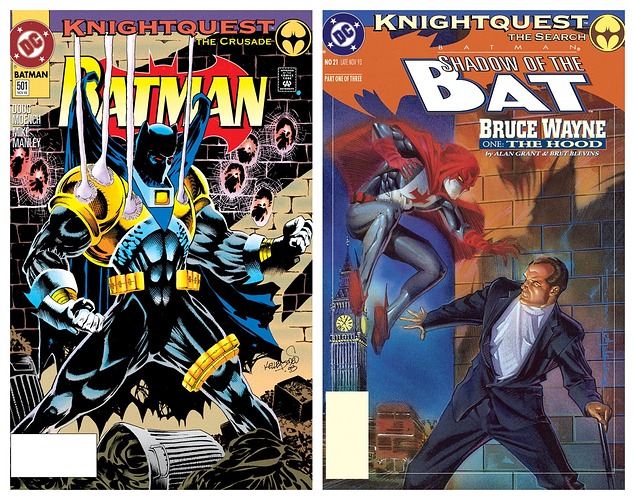 Jean Paul Valley, the new Batman, encounters new foes and clashes with old allies in his mission to be a better Dark Knight than his predecessor. Meanwhile, Bruce Wayne and Alfred Pennyworth travel to London on their mission to save the kidnapped Jack Drake and Shondra Kinsolving!

Looking forward to reading these issues with you all!

Jean-Paul’s story here is full of action and certainly keeps me entertained, but something about it doesn’t click for me. I don’t like his character partly because of his apparent lack of regard for civilians; his witnessing a mugging and doing nothing about it is definitely not Batman like behavior and the way he cut it so close on the train tracks also rubbed me the wrong way. That’s before we even mention that the World’s Greatest Detective isn’t interested in detective work

I can’t wait for Bruce to get back and set things right. Jean-Paul seems to have fallen in with some of the 90’s worst trends, everything has to be X-treme

Bruce’s story, on the other hand, scratches that classic Batman itch. We see him in a disguise, doing detective work, being sad in a cemetery, and we get Alfred being Alfred. Grant does a great job nailing that Batman tone even though Batman is barely in his cape and cowl.

Jean-Paul seems to have fallen in with some of the 90’s worst trends, everything has to be X-treme

See, my problem with these issues is that he isn’t extreme enough. He’s often less extreme than Bruce was in the 1980s. I was hoping for a stronger contrast between the two characters, and all I get is a Batman who has as much contempt for Tim Drake as I do.