[World of Bats] I Am Gotham

That is nice dialogue. Of course on second read everything is colored by my knowledge of what’s coming which makes it a different story but still very good

Oh that was GREAT. Alfred is extremely loyal to his charge, but he doesn’t let that stop him from unleashing his inner sass. 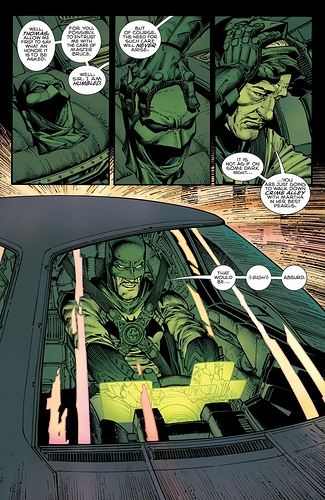 The bit with Alfred talking about Bruce wanting a katana for Christmas was also on point.

Love the timeless design of Gotham and Gotham Girl’s costumes. They really could be from anytime from 1940 until today.

I agree, both designs are great – and shows that you can have an awesome, varied colored superhero costume without the use of trunks.

Yeah, reading this with the foreknowledge of everything that happens in this series made me both think “wow, this is a cool hint of things to come” and other times think “wow, that NEVER came to be.”

This time reading through the arc, my 2nd read through, I was really struck by the parallels between Batman and the Gothams. The whole mugging in the back alley thing was obvious, there’s also the using money as a source of power to fight crime, fighting crime to work through the pain of losing someone, and, the one that really hit me over the head this time, choosing to save the city over their own lives.

Batman with the airplane in the beginning and later it being revealed that the Gothams trade their very life-force for superpowers. That sort of narrative symmetry is immensely satisfying and, while a cool action sequence is great on its own, it’s nice to see one have that sort of narrative weight.

It was fun reading it again and I definitely feel like I got more from it this time. Also Kite Man makes a cameo.

Yeah, the Gothams make for a very interesting parallel in that here are these super-powered people who were inspired by him, but are capable of so much more.

(An aside – part of me wishes that they could have stuck around a little longer pre-Strange and Psycho Pirates’ mindblasts, if not just to see how the rest of the Bat-Family reacted to them.)

What I think is a crucial difference is how they lost their parents. Bruce losing his as a child, powerless to do anything about it, I think gave him time to grieve in his own way and figure out the best way to fight the causes of what killed him. But when the Gothams lose theirs as young adults, with the power that they had…their grief and fear turned Gotham into something monstrous, and laid deep roots for Gotham Girl’s story later as the story goes.

I think you mean “the beginning of a legend.”

I completely agree that it would have been nice to play the long game with the Gothams. Let the reader really settle in with them for a couple of years. How do “Super Bat Siblings” impact Gotham? Give them some victories and some low points. Then when we’ve completely accepted them as part of a new Gotham, lower the boom.

Yeah, it would have been cool, but I think what we got was still pretty cool too.

Also finished re-reading #6 today at lunch, and I was struck by how intimate and personal the story was. From what I remember, Tom King has talked about in the past how this issue was inspired by when his mother passed shortly before doing this issue, and how he was talking to himself, but in his mind talking to his mom just to have some way of hearing her voice again, even if it’s in the head.

It felt like a genuine human moment, and seeing Bruce come around and reach her by sharing his own grief and loss was very special. It’s right up there with, say, him helping Ace in Justice League Unlimited.

Also something interesting was the smaller villains used. Everyone talks about this introduction to Kite Man, but really all the villains here are used very well. What struck me was how when researching these characters…all the stuff that characters like Stingaree going after his brothers thinking they were Batman, were doing were from their original origin stories, just done in a more modern way. It reminded me of something that Douglas Adams reportedly said when he was writing and editing for Doctor Who back in the 80s, how the best Who villains are characters/species that on the surface seem absolutely silly and ridiculous until you see that they actually are capable of doing what they say, and then they become terrifying.

Also also – WHY IS IVAN REIS SO GOOD, MAN? He can do the big action, the cool comic layouts, and he can sell the hell out of these emotional moments. 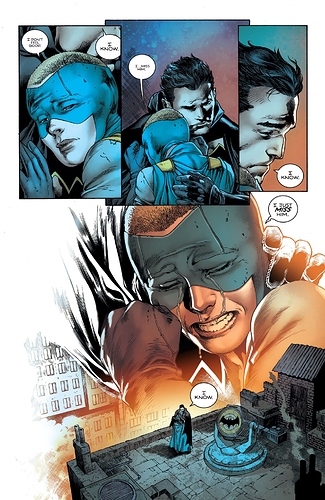 This was real emotional roller coaster, for sure. Thank goodness for Alfred and Duke’s side snark.

I desperately want to fix the text on this.

I guess the internet is just going to internet.

On the gif? Eh, it still gets the point across.

I agree, total roller-coaster! Alfred’s snark is truly a thing to behold and an ideal to strive for. 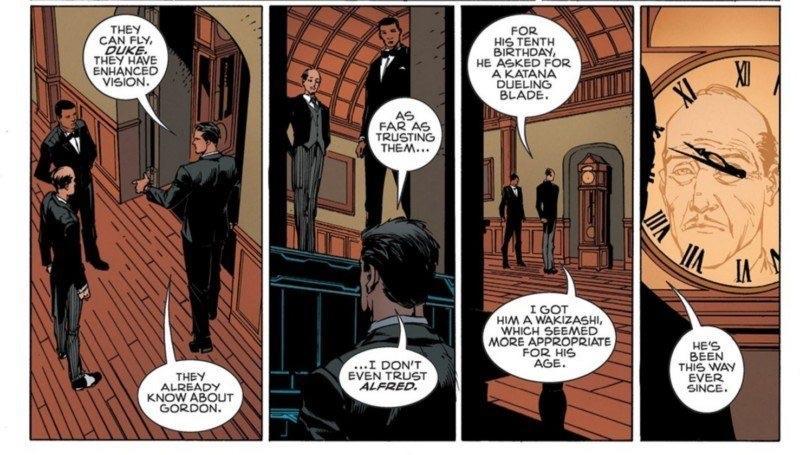 I just started reading it and its ok so far. Is Gotham man and Gotham girl new? because i never heard of them.

Yep, they first debuted in this first issue.

Looking forward to reading your thoughts!

you know which comics they are in so I can read their story?

@Jay_Kay
Also the first issue is a little over the top, I hope it goes back to more down to earth stories.

Damn didn’t think they would do Gotham man dirty like that. I liked both the new characters and kinda wished they wouldn’t of done that to Gotham man. On issue #6 right now!

Yeah, Gotham (Man) definitely went through some stuff in this story. I always remember the page where he tries to talk down a guy trying to commit suicide, because of how hard he tries but how badly he’s doing it, like he’s hyping himself up more than actually trying to help. It’s like a dark inverse of the famous page from All-Star Superman where Superman talks a woman down from jumping. 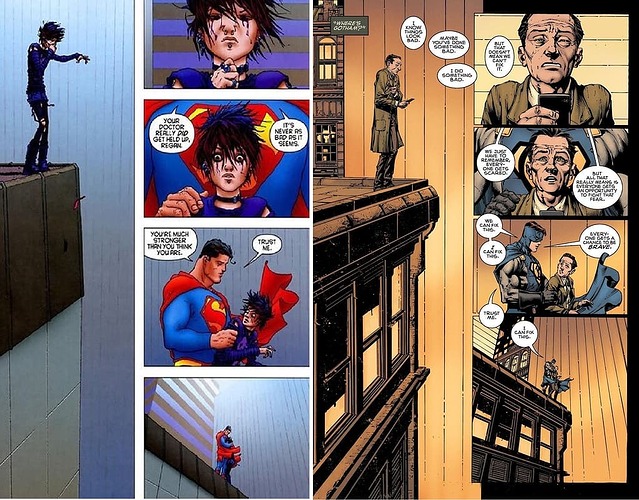 Yeah, Gotham Girl also has a rough time ahead. If you want to see more of her, you should look at the next two parts of this “trilogy” that starts King’s run, “I Am Suicide” and “I Am Bane.” We’ve covered these two parts on this book club in the past, so if you continue to read these, please let us know your thoughts!

[wob bat_cat] Welcome to another installment of the World of Bats, the Batman Book Club! This week, in anticipation of the Batman/Catwoman maxi-series by Tom King and Clay Mann coming out this coming Tuesday, we’ll be going back to the Tom King run of Batman and exploring a few stories more explicitly focused on that relationship. First, issues #9-13, “I Am Suicide,” with art by Mikal Janin. Batman has always been crazy…but this? This is suicide! In order to retrieve Psycho-Pirate and save …

I’m loving these sad stories, does this make me a bad person?

o well, I’m reading nightwing right now and trying to piece the second part of the crossover. I might skip to bane though.

For real, I think an effective run should have a good mix of happy and sad stories. It’s like life, it’s never all one or the other.

I would recommend not skipping to I Am Bane, though, since the events of I Am Suicide also involves Bane and very much leads to that third story. You can probably skip the Rooftops and Date Knight issues since that deals more with Bruce’s relationship with Catwoman (which is a rather big part of King’s run in general).

I gotta read more tom king stuff and I also like a mix of happy and sad stories. I’m reading batman: white knight also and I am loving it when the bad guy turns good.

Also, who is batwoman? It doesnt say in the novel.

White Knight is definitely a very interesting story! If you want to talk about it with us, we also covered it a while back here:

Welcome back to the World of Bats, the Batman Book Club, and a special edition too! Today we’re unlocking a new Casefile – larger stories that may take more time than the usual books and for special occasions – and what a special occasion this is! For the rest of the month of April, we’re going to have a deep dive into the most recent big addition to the DC Universe library of comics, “Batman: White Knight!” [image] Link to the series can be found HERE! Discussion Questions: While this …

As for Batwoman, there a couple different versions, but the one who probably has the most stuff and is now most associated with the character is Kate Kane, cousin of Bruce Wayne, former Army cadet who was discharged due to Don’t Ask, Don’t Tell, who picked up Batman’s crusade against crime in her own unique way. If you want to read more, I would most recommend the Greg Rucka run on Detective Comics starring her, and the James Tynion IV’s run of Detective Comics, which featured both her and Batman teaching the younger generation of Gotham heroes.