This week we’re going to be closing up our New 52 anniversary reading (though it certainly won’t be the last book we’ll be reading of this era) by going through the one Batman starring on-going we haven’t talked about yet. We’ll be looking at issues 1-8 of Batman & Robin, written by Peter Tomasi and drawn be Patrick Gleason! 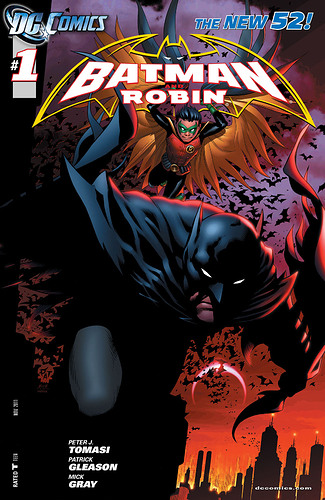 Battling evil with his son, Damian, at his side, Batman now realizes that the hardest part of the job may be trying to work together! As Batman and Robin try to adjust to their new partnership, a figure emerges from Bruce Wayne’s past—one not happy that Batman Incorporated is shining a light on his own shadowy war against evil.

Looking forward to discussing these issues with everyone!

As Gimli said in The Two Towers, “Yeeessss!”

I love this book. As someone whose Grant Morrison fandom is brobdingnagian (aka gigantic), saying this might be heresy, but I kind of like this volume of Batman and Robin over his series (well, mostly his).

One was great and odd and fun as only Morrison can make it, while the other was a solid series that focused on father and son as they saved the world, and sometimes went to other worlds to save each other for that matter, but that’s way, way down the line from these issues.

Looking forward to the re-read!

I love this book. As someone whose Grant Morrison fandom is brobdingnagian (aka gigantic), saying this might be heresy, but I kind of like this volume of Batman and Robin over his series (well, mostly his).

But I think I get what you mean – Morrison does do a lot of character stuff, but it’s often mixed in with all this action and mystery and leading up to all his grant plot style. But here it’s a much focused character piece. You really get to sit and stew in Bruce and Damian’s frigid but longing dynamic.

Looking forward to hearing your thoughts during your re-read!

That series was fun because of the brotherly dynamic between Damian and Dick (“DickBats”?

), where the New 52 volume was, like I said earlier, focused on the father and son dynamic of Bruce and Damian. The changes in focus offered a good narrative connectivity between the volumes.

Of all of the New 52 10th anniversary club-related goings-on, Batman and Robin is very nearly at the top of the Batman-related stuff I’m eager to revisit, so I will definitely go in-depth on those initial 8 issues!

I think that’s what most people call him – fits in the pervious naming complex for Knightfall with AzBats. You can even do the same with the brief oppearance of Jim Gordon with JimBats. Some people add an exclamation mark between the two and honestly I have no idea why.

AzBats was what I had in mind, but I wasn’t sure if “DickBats” would make sense to some, or make them think “What the hell kind of Bat-gadget is that?”

I mean, Batman practically has a gadget for every occassion, so…

Coming from someone that’s read very little of Damien as Robin, I thought this arc was very good. Tomasi really explores the difficulty a recently united father and son have relating to each other. I could feel the struggle each was going through to do right by the other. The antagonist also fits the father-son motif quite nicely.

Lastly, I just loved this take on Alfred. Part emergency physician, part therapist, and a father figure to both Bruce and Damien. He does it all with that perfectly dry wit.

but I wasn’t sure if “DickBats” would make sense to some, or make them think “What the hell kind of Bat-gadget is that ?”

The kind that gets obscured in shadow when the prudes get wind of it.

Sorry, had to go there.

Glad you liked it @john.21795! I agree, Tomasi really does a great job with the character dynamics here, especially between Bruce, Damian and Alfred.

Still making my way through these (I’m on #4 ATM), but I’ll offer a full report when finished.