Hello and Welcome back to the Batman Book Club!

Now, I know what you’re thinking: didn’t you just do a thread like this yesterday? Well, yes, but here’s why.

For those who don’t know, when the DCU Community was down for this shiny new make-over, a load of us kind of continued the book clubs via a personal Discord (which if you want to join you can here). So during that time, I posted this for the book club on that Discord. But now that the community is back, I figure that all the weeks should be on here.

So because of that, there is no time limit or anything like that. If you want to read this instead of the current week, cool. If you are already done and want some more Joker in your life, cool. If you started during the downtime and intend to finish it – I’m looking at you, @BatJamags – cool.

So with all that done, here’s the previous post, straight from the Discord:

Week Two of World of LAUGHS Begins! This week, we’re going to venture back to a well known title for this club in Batman: Legends of the Dark Knight #65-68, “Going Sane,” written by J.M. DeMatteis and drawn by Joe Staton. He’s finally done it – The Joker has defeated and killed his arch-nemesis, The Batman. All of his plans and dreams have come to this, and now he has to ask: What happens next? Share your thoughts about the story in the Batcave! 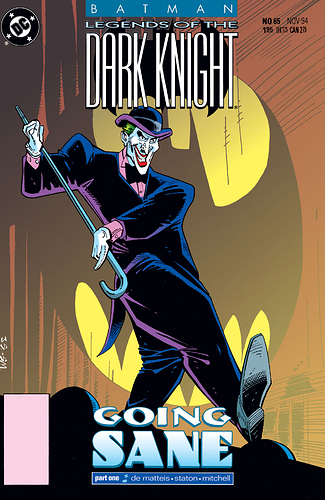 And since this arc is a little shorter than normal with four parts, let’s add a little extra credit. For some more stories of Joker colliding with characters other than the Dark Knight, let’s see how the Dominoed Daredoll fares against him for the first time in the 1997 Batman: Batgirl one-shot by Kelley Puckett and drawn by Matt Haley. 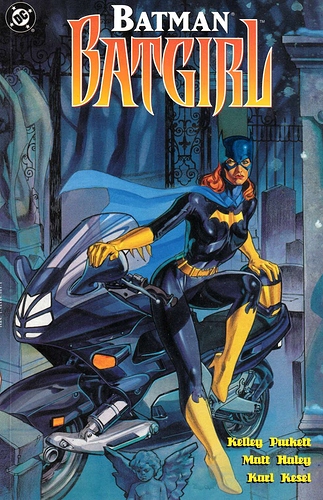 I think I might enjoy “Going Sane” more if I could keep myself from comparing it unfavorably to “Fearful Symmetry,” also by DeMatteis. Granted, one could argue that the story is more in-character for the Joker than it was for Kraven the Hunter.

I quite like the Batgirl one-shot. It tells the story of Barbara’s first encounter with the Joker without devolving into a fetishization of their encounter in The Killing Joke.

That’s interesting, while I agree that I don’t think this is as good as Kraven’s Last Hunt, I’m not sure if I find it that similar. Sure, both involve the villain seemingly killing the hero, but Going Sane has more of a sense of tragic normalcy, whereas Last Hunt is more shamanistic and the villain trying to take over the life of and be better than his foe.

Also, slightly off-topic, but I love how DeMatteis I think is probably most famous for his collaboration with Keith Giffen on the comedic JLI, but his solo work is far more grittier and subdued.

I also liked the one-shot – I liked how the book made her feel both inexperienced but still capable. Reading some of the earlier specials like this, that was sadly kind of rare during this time period.

Fun fact, there actually is a sort of sequel to this one-shot. Despite the title sounding otherwise, DC 1st: Batgirl/Joker is Barbara as Oracle telling her first encounter of Joker to the then new Batgirl, Cassandra Cain, and her deciding to go after him. The main art is by Bill Sienkiewicz, and the flashback art is by Terry freaking Moore. Yeah, freaking Strangers in Paradise’s Terry Moore. 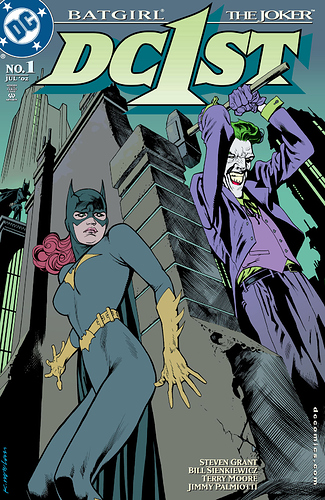 Oh, and while I’m posting fun facts, a couple for Going Sane.

While the Joker movie is rather different in ways to the comics, the Special Thanks part in the end credits not only for the first time lists Jerry Robinson as one of the creators for The Joker, but it also lists J.M. DeMatteis and Joe Staton in the lists of creators influential to the movie. I get the feeling that a hint of Joe’s mannerisms as well as his romantic relationship were somewhat inspired by this.

Also, DeMatteis has talked about how he had the idea for this story long before release, back in the mid-80s. It was rejected at the time because the idea of showing Joker normal with a relationship was already being done in another book being made at that time – The Killing Joke.

I wonder what would have happened if this was made first instead of The Killing Joke?