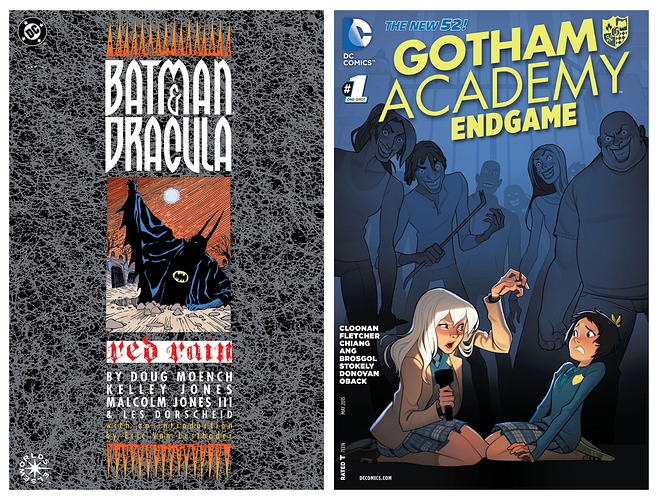 Hello everyone and welcome to another spooky installment of the World of Bats: the Batman Book Club!

This week, to close off the month of October and our look at the horror side of Batman, we’ll be covering two one-shot comics, one classic and one modern!

First we have the Elseworld story Batman & Dracula: Red Rain by Doug Moench and Kelley Jones:

In this Elseworlds tale the Dark Knight Detective matches wits and brawn against one of the most dangerous adversaries in literature. A plague of the undead is sweeping across the city and the police are powerless to stop it. Dracula has come to Gotham, and the streets will run red with the blood of its citizens unless Batman can find a way to defeat this legendary foe.
LINK

And after that, we’ll end this week of spooky tales with something a little more innocent – as innocent as Gotham gets anyway – with the one-shot Gotham Academy: Endgame!

Gotham City has been overrun by craziness, and the power is out at Gotham Academy! But don’t worry. The kids are safely locked up, huddled around candles and flashlights and telling the Gotham City version of ghost stories: Joker stories! Meanwhile, a mysterious figure connected to the Academy’s past is patrolling the grounds with a crossbow, but who is it?

Little something for everyone this week! Let us know what you guys think of one or both of these stories down below!

I’m somewhat amused that the Eric V. Lustbader foreword to Red Rain contains two quotes from a Prince song that appeared on the Batman '89 soundtrack.

That’s how hard Batmania swept the world, when people would even be quoting the soundtrack some…two years later.

Red Rain itself is pretty fun. I think it easily could have been an in-continuity arc if they had so chosen. (Granted, Batman would have to become human again eventually.)

That could be cool – sort of like how in Spider-Man he briefly had the extra limbs, or like Jubilee who was just a vampire for a couple of years.

Now that I think about it, I think Batwoman had a plot after the Williams/Blackman run that had her at least nearly become a vampire.

But yeah, I really enjoyed Red Rain. I hope that we’ll get the other two parts of the trilogy on the service. It seems like they’re not on digital anywhere except for an Elseworlds collection that has all three together.