Why Damian Wayne Needs to Become a FULL TIME Villain!

I wonder what it would be like if he became a paraplegic oh, maybe he could be Batman’s ‘guy in the chair’ in the Batcave. Then after a while of being stuck in a wheelchair he mellows out. Then gets cybernetic limbs but refuses to be Robin, he chooses a different super hero alias. GIZMO ( jk )

Ehh, or just kill him off, he’s annoying.

If you read Grant Morrison’s run (Batman, Batman and Robin, Batman Incorporated) it looks like he was supposed to die off by the end of that story.

I sure wouldn’t miss him.

No, I like Damian, and the story that was set in Rebirth Batman Beyond. I like Damian! There. I Said it! He appeals to my egotistical weirdness.

Disagreed. Damian’s story is a story of personal growth. To have him become a villain would be to completely ignore, misinterpret, or be unaware of that growth and who he’s become.

If you or someone you know is struggling with a misplaced hatred for Damian Wayne, I recommend reading Tomasi’s Batman and Robin run.

I find Damian to be a very complex and compelling character, myself. I think that the fact that there are compelling arguments to be made for both his rise to heroism or fall to villainy is part of what makes his character such an interesting departure from the norm.

Personally, I’d prefer to see him step into the role of a hero - or at least an anti-hero. I think that Damian connects to people who come from toxic families or people who have experienced gaslighting and abuse. So having him become just like the people who used him and trained him to be a weapon would be a little disappointing.

That said, it could make for a very different kind of villain, if the writers took him in that direction. We’ve seen villains with tragic backstories and sidekicks become dangerous vigilantes, but it’s still fairly rare to see one become a full villain. It could make for an interesting turn. Especially given his blood relation to Bruce.

I think I’ll pass it off to you guy s. Do you think it’s more important to show Damian move past his abuse, or would you rather see a potentially very complex and unique villain within the Bat Family?

I don’t like Damian at all … and that’s what makes him a compelling character, imo. Any character that can be written to evoke the kind of emotion that Damian does is, by his very nature, compelling.

The real issue is how to use him in stories and I don’t think that villianizing him is the right answer, although having him as a villian on an alternate Earth in real conflict with Batman might make for a fun maxi-series. But on Earth Prime I think he eventually needs to resolve his internal conflict and move on to becoming a Hero (even if he has serious gray tints to his crime fighting prrsona).

Leave the little boy alone you bullies he is trying his best. Go read Tim drake as Harvest

I really like Damian. I don’t think turning him into a villain would fit the character. He has grown so much since he was introduced and a turn back to the league of assassins wold get rid of all that

Damian has the desire to be better, to be more than what his mother and grandfather intended him to be. He didn’t want to be a murder, he wanted to be like his father. But the struggle to overcome all of that is a great storyline, just like Orphan. Deep down, I can feel the love he has for his father, he idolizes him, even though his pride would never allow him to admit it.

Nah, I generally find Damian interesting and amusing. As others have said, I think turning him into a villain would just regress the character. I tend to like Damian’s interactions with the Batfamily, especially the brother relationship he has with Dick. I also don’t think we need more Robins.

I do not like the whole “Batman & Superman have sons” thing either. I tried to make myself like them. I actually do like both their characters a lot. But NOT for Superman and Batman themselves. Tim drake is Robin. And Connor Kent is superboy. PERIOD. That’s actually a good idea making Damian a full time villain, kind of like a Hush character combined with James Gordon jr

This will be an unpopular opinion I’m sure but here we go. I like Damien and I think he should eventually become Batman. All the other Robins have grown up and become separate characters. Red robin, nightwing, and red hood. Alfred will pass away at some point. Bruce will get to the point that he can’t be Batman any more or die. It makes sense to me that Damien will take up the mantle and Bruce would Become the Alfred character. Damien will by that point have grown into less of a punk and become the ultimate Batman with mentorship from Bruce, Dick, Alfred and the Teen Titans. Plus his Background from the league of shadows. He would be the strongest choice for Batmans replacement. He is after all more capable than any of the other Robins at his age. Plus he is a Wayne so one day all of Bruce’s holdings at Wayne enterprises would probably pass to him. Witch makes it all the more important that Bruce makes a good man of him.

I think Damien will eventually become a bad guy. We’ve seen it established that every timeline where Damian becomes Batman, he’s basically Hitler.

Sigh, look. I know how impulsive some of us can be about things, but I really am inclined to believe that some of us in this community do not give the right amount of effort in recognizing the common themes, staples and takeaways of certain characters.

In this case: Damian Wayne.

There are already other characters that are arguably very much on the same boat regarding thematic elements that we see in Damian. In particular the wavering/conflicting ethics that we see depicted in multiple iterations as well as cemented throughout multiple stories.
Examples:

We keep comparing Damian to other Robins, and here I’m just wanting quality and deep story arcs to consume. Besides Damian has already been depicted in alliance with opposing factions such as Injustice and Batman Beyond: Rise of the Demon.

Damian Wayne as Batman, however. Those are the stories that’ll have us impacted for sure. Think Berserk meets Twisted Metal : Black, meets Spec Ops: The Line in terms of the exciting yet stark world and plot to unfold. We already got a few tales here and there but something big is what I’m anxious for.

In all, Damian is a tragic hero and DC knows that for sure. The Son of the Batman is too good to discard as another by the numbers villain. 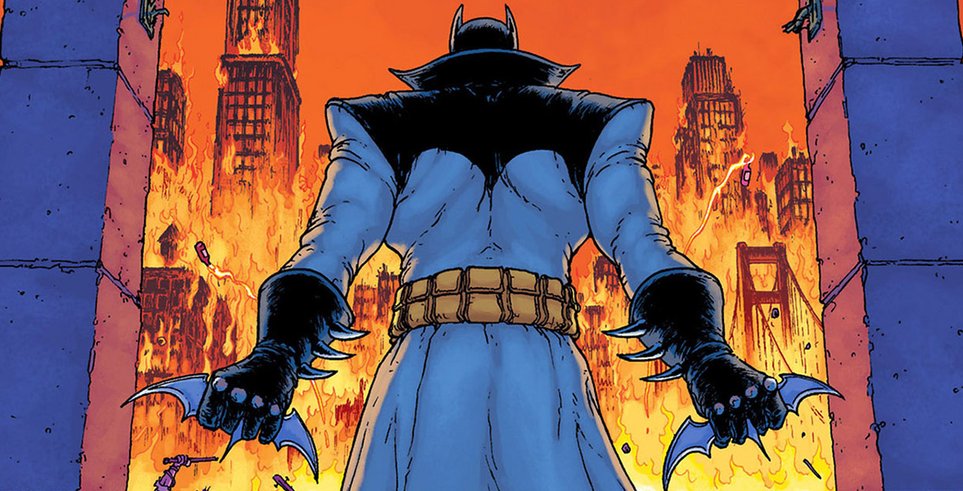 I like Damian he’s cocky but backs it up. He’d kind of like a demon that’s heard old time stories of earth, comes to earth, nothing is what he had heard, super confused, pissed off