Why Damian Wayne Needs to Become a FULL TIME Villain!

Those who disagree tell us why you love Damien and why he’s worth the mantle of Robin. 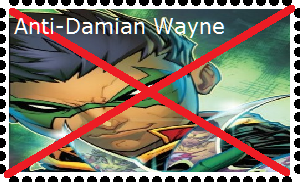 Tim Drake is Robin again. He’s been Robin in Teen Titans Giant for over half a year now and is in that identity in the current Young Justice series too.

I disagree with the premise that the majority of readers hate Damian as Robin. And to make him a villain would be to take away the most interesting aspect of the character, which is his struggle to rise above the position he was born for. Sure, Damian can be a stuck up jerk. But his story is about learning a sympathy denied by his upbringing.

Tim’s a Robin not the Robin.

Honestly, while I don’t like Damian at all, I don’t think turning him into a villain would fix him. It just subverts what little interesting character development he’s actually had, and necessarily requires him to be even more of a jerk than he was even when he was first introduced. He’d still be around and more obnoxious than ever, we’d all still hate him, and his fans would be equally annoyed. No one’s happy.

Killing him would be efficient, but they tried that and it was a trainwreck. Not the best thing to repeat.

Developing him to a point where he’s not obnoxious is normally the best solution to this kind of issue, but that won’t work either, because the problems with Damian as a character are so fundamental that “fixing” them all would just be creating a new character who’s not Damian. As long as he’s around, he’s always going to be the snotty, entitled, self-important, super-special son of Batman who gets to do cool things because of who his daddy is. That’s the entire premise of the character.

So, that leaves one thing: Just stop using him in stuff and let him fade into the background naturally. Obviously his fans wouldn’t like that, and I respect that opinion, but personally I believe that if Damian just goes away, the franchise will be improved by his absence.

@ BatJamags I agree I don’t want him dead either. He is an interesting character, I just can’t stand him. However I will admit that SuperSons did has mellowed me on him a bit. You can tell that he really gives a damn about Jon and their friendship. Even if he doesnt admit it.

Problem is turning any jerk character into a villain is an easy cop-out from giving that character a chance to see through his or her own mistakes and behave less like a jerk in the future. I’d rather a good writer or two develop Damian’s personality rather than stick him in the villain role out of nowhere. I’m not even much of a Damian fan, but I support the notion of giving flawed characters a chance. Flaws and imperfections can build a good character in the right hands.

Yeah I would like Damian to turn into a villain

He was a good villain in the Injustice games

No, I like Damian. He is cool. I like to think he becomes the last batman. That his father got through to him.

As is he’s betrayed his father several times already so he’s practically a villain anyway.

What would his NEW villain name be? And I agree on the new Robin thing… never like Damian much after he betrayed Bruce the second time. Its about time someone new got orphaned in Gotham City, am I right?

Well, we know Bruce eventually turns over the mantle to Terry McGinnis via Batman beyond. So they could certainly have Damian take a different path. Like every other Robin. Perhaps an anti-hero.

Or maybe a second Killing Joke, where Damian has one really bad day and cracks like Jim G. didn’t.

I love seeing a mini bruce with a different attitude

Always found it weird when DC fans are like “Stop forcing Damien on us”.

Yes, I think he would be a great ultra-villain. Looking forward to see how DC evolves him.

Damian is a snotty, entitled little brat who thinks he deserves attention solely because of who his parents are, and is consistently proven absolutely right by the narrative. The only way to turn him into a villain would be to make that even worse, which means it would annoy both his fans and his haters in equal measure.

I think I already said this, but since the thread got bumped, I’m throwing it back out there for the sake of argument.