Who Would Win: World Cup Edition

The 2022 World Cup is now well under way, and we here at Who Would Win want to get in on the fun! Which DC character would you most want on your team to help you win it all? Share your choices with us, below!

(And if you feel like discussing the World Cup more, be sure to check out this great topic!)

Which DC character would you most want on your team to help you win it all?

My Xeroxed Monopoly sheckles are going towards The Flash.

He’ll have the game over in no time flat, while leaving the opposing team(s) winded.

@Green.Lantern do we choose a whole team, or just one character?

Well, if we’re going the team route, I vote for The Authority.

Go for the gold, Midnighter!

I would go with The Flash. It really doesn’t matter which version (although I seem to recall Jay Garrick actually played football, so he’d be preferable to Barry or Wally). I figure with The Flash’s superspeed, my team would be sure to win!

Would the Flash have an issue because of his super speed? I’m not the greatest expert in super speed physics (or just physics in general), but I think if he was just running around full speed all the time, when he kicked the ball it would either tear apart or going flying into the stands. But he could just slow down when he needed to, I guess.

Well I’ll build a team! There are 26 players on every World Cup team, so I’ll hide details ig.

My bats. They will dominate with their sonar.

Are they strong enough to kick the ball? How are we supposed to know if they make an illegal play? So many questions, but so little desire to know the answers…

How are we supposed to know if they make an illegal play? So

I fail to see the problem.

Sportsmaster seems like the right choice. He is a master at sports. 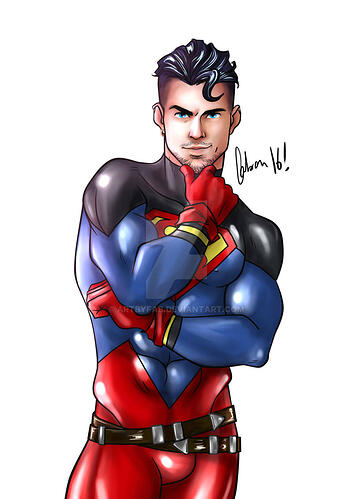 Konned superboy artbyfab800×1132 84.3 KB
He’s got speed he can well control well, unlike the Flash family members in this type of setting, plus his TK will keep the ball within his field (e.g. his person) until he gets near the goal post and hist TK can simply slide towards the goal post irrespective of the talent of the defender.
7 Likes
chintzybeatnik November 23, 2022, 11:16pm #18

I was thinking that having a goalie who could stretch their body would be great (how many times does the ball get just past their outstretched fingertips?). Obvious choice would be Plastic Man, but he might take the dive for a payout.

So I went Elongated Man in goal.

With my team, I’m going to go for a 4-2-2-2 gegenpress. We’re going to play narrow, try to win the ball back immediately after losing it, let transition moments be our main creator, and do a lot of running. Therefore, I’m going with mostly a youth revolution here since this system is going to require a lot from our heroes. Here’s my starting 11: 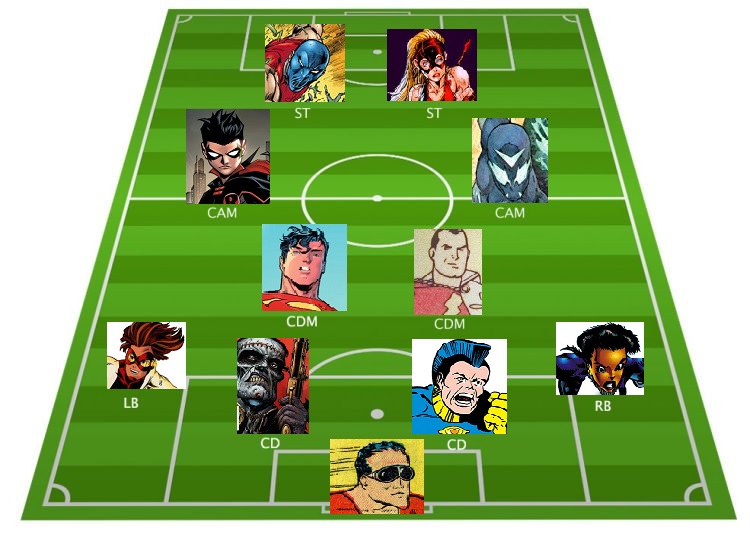 I decided to go with two different kinds of forwards here. First, I wanted a target man who was going to win physical duels and who we could just lump the ball to in emergency situations. Atom Smasher’s growth ability will be useful for this. My second striker just needs to be a bit quicker and accurate, so I gave the nod to Arrowette.

Again, I wanted two different types of player here. I thought it would be good to have at least one strategic creator, so I gave that honor to Damian. On the other side, I wanted an obnoxious midfielder who was going to pop up out of nowhere to win the ball back. Hence why I picked Sideways for his rift portals.

Their main job is to protect, to shield the backline. However, sometimes I will need them bombing forward to link the offense with the defense, so they’ll need speed and strength. Why overthink this? Jon Kent and Shazam are the obvious picks.

These positions will be key as they provide the width to my attack, but they also need to double back to defend when the opposition counters. Basically, these players need SPEED. I went with Impulse and XS to be my Flash-family wingbacks.

These guys don’t need to be very fast and therefore not particularly young. They’ll mostly be hanging back and I just want them to be big thugs standing in front of the goalkeeper and winning physical duels. Let’s give these positions to the duel monster threat of Frankenstein and Omac.

Plastic Man because he can stretch to defend the goal and he can change the shape of his limbs to help him distribute the ball up the field. Also, he’s Plastic Man.

After thinking long and hard (for like 20 seconds) I have decided I would want Bernard Dowd on my team. I would forfeit the World Cup, and then just spend time with Bernard. This is an excellent answer, I know.

This well strategized and detailed team is no match for my mob of bats.

Standing in my technical area shaking my head as bats swarm my players thinking about how I knew I should’ve selected Beast Boy.