Who Would Win: Nightwing Vs. Black Manta

This week’s fight is between Batman’s first protege and Aquaman’s greatest nemesis-Nightwing versus Black Manta!

Dick Grayson began his heroic career as the first Robin, and later stepped out of Batman’s shadow and took on the name of Nightwing. He is a skilled acrobat and martial artist and has a wide range of high tech gadgets and weapons to draw upon.

A ruthless mercenary whose history with Aquaman is full of blood and revenge, Black Manta has superhuman speed and strength, and a suit with built-in weapons and a helmet that allows him to fire optic blasts.

Which one of these skilled fighters do you think would win? Let us know who and why you think that, below! 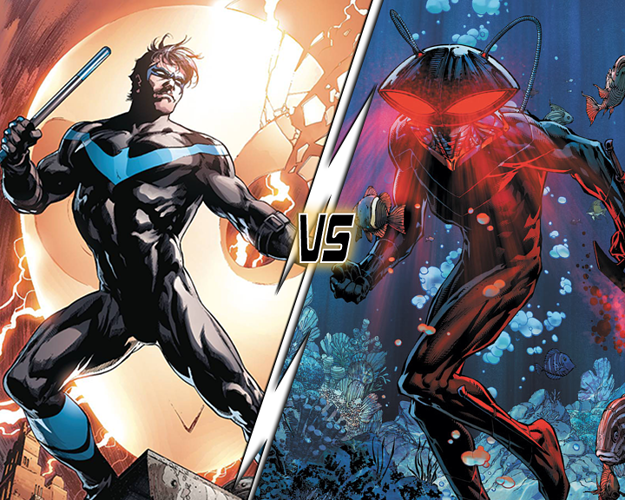 I pick Black Manta, cause he has Laser beam, if you watch Aquaman movie,you can see how tough he is!

He’s much tougher than I initially thought! I liked him a lot in the movie, and have read him some here and there (mostly in New 52 Aquaman I think), and I think he tends to be underrated.

This is a really great matchup. Nightwing is probably the better fighter, but I feel like Manta’s strength and ruthless, bloodthirsty nature would give him just enough of an edge overall. Dick would look to subdue, but David’s going for the kill. Either way, this is a fight I’d pay good money to see

Definitely more than 1 round!

I’m glad to hear you like it! I’ve wanted to feature Nightwing for a while but could not think of a good opponent for him, and then a few weeks ago I was playing Injustice 2 (finally) and the idea came to me.

Black Manta wins. Nightwing may be one of the world’s greatest hand to hand fighters, but Black Manta has a giant laser, or plasma, or something, which he’s already killed Robin with once. (DCeased: Hope at World’s End spoilers)

Statistically Nightwing definitely would win but with my bias Manta wins.

Could it be that you trained with Nightwing?

if you watch Aquaman movie,you can see how tough he is!

Either way, this is a fight I’d pay good money to see

Passes a popcorn to arkhamassassin.

Will need a lot of electricity, but is doable for Nightwing.

Still… Was a tough decision on who to pick to win. Thank you for this G.L.

I picked Nightwing. He’s one of the best hand to hand fighters, is unpredictable, has gadgets to rival Batman, and has experience fighting against super powered/enhanced villains. I’m confident Nightwing would be able to negate the advantage of Black Manta’s suit.

I think this would be a very interesting matchup to see.

What I want to know, is which one can squeeze into their full-body, skin-tight black suits the fastest.

yeah, I’m thinking you’re right. He could hang suit on clothesline, toss the baby powder up in the air, powder his legs, and slide right down into the suit… all in one fluid motion.

This contest went in a direction I was not expecting, lol.