This week is Teacher Appreciation Week in the United States. To celebrate, we’re going to ask who would win Field Day games at Super Hero High School!

Featured on DC Super Hero Girls, Super Hero High School has among its students and faculty some of the most famous and powerful DC characters. Pick one of the Field Day activities listed below, and tell us which character (or characters) you think would excel at each activity and why!

If you’d like to watch DC Superhero Girls yourself, you can do so on the CN App,
Amazon, or Netflix (thanks to the fabulous @Razzzcat and @Mae for providing those links). 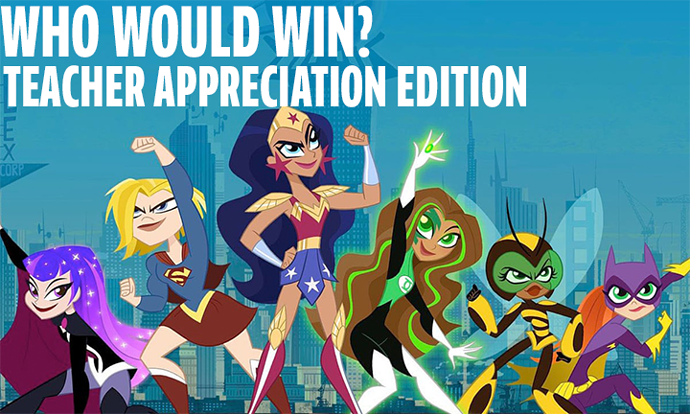 Kara (Just realized how hot of a take this is.)
Sack Race

Based solely on running I’d say Diana, but if we allow flying Kara.
Relay Race

Again depends on if we are counting flying, if we are Jessica and Kara if not Diana and Kara
Ultimate Frisbee

I hadn’t thought about it, but I feel like Jessica Cruz could use ring constructs to help control the path of her frisbees. Which might be cheating, maybe? Although if everyone else can use strength, speed, and flight, I feel like she’d be able to use her ring as much as she could.

I have to admit I’m learning alot from @Razzzcat, @Mae & @DC89 about Super Heroes girls! I don’t know if they’re teachers or not, But I really appreciate them.

Winners for these races in my opinion are…

Since this is in the framework of a Field Day, I’m including two key points in my logic:

Team: Whoever has their side tied around Kara’s waist

If Kara can’t be found, this goes to Team Doris.

Babs. All day, every day. Have you seen that girl bounce?!*

Slow and steady; nobody will see them coming. Everyone else will be arguing or fighting over technique.

Awkward tie between Diana and Barry, as they eye each other up trying to push the limit of what they can get away with without exposing their powers.

Post-finish line, they loop around the remaining 300 meters of the track, both colliding with Kara, who is looking down at her phone, still standing at the starting blocks.

How big is this relay? I’m going to two-person teams based on the emojis.

Girl is from Portland. Hell yeah, she’s a Frisbee pro. She probably gets all frustrated when her friends just want to play catch, but she’s trying to organize a proper game of Ultimate. So, if the game is Ultimate, it is a team win, but only because Jessica is running the gamebook and forcing them to focus.

Again, this would be a team win, but the superstar is Zee here, as the only one whose powers can be used on the downlow to benefit them. (Well, Kara could use X-Ray vision, if she were paying attention.) But a little Etacol eht galf and she’s off for the win while Babs, Jessica, Karen, and Diana run interference/distraction in the other direction.

Have you seen that girl bounce?! *

Other students are participating, so no overt use of powers. No flying, no miniaturization, no constructs, and Diana, Barry, etc need to slow their running to a believable speed.

with use of powers

I see Barbara being relentless in capture the flag.

Ohhh, what can I get with my points?!

with use of powers

lol, thanks. I like to overthink the conditions of simple “who’d win” scenario threads.

I see Barbara being relentless in capture the flag .

Absolutely. I feel like everyone else is still playing, not even realizing that Babs won an hour ago.

Ohhh, what can I get with my points?!

I believe there is a mail-order catalogue being circulated. Check with @Vroom

Maybe they even have those Batgirl PJs!

IDK if it’s legal to Xerox it, so…

I still have a Kinko’s! They’ve got the FedEx desk, but haven’t fully rebranded.

I remember watching the numbers rotate on that li’l…thing (cartridge? I dunno it’s technical designation) that you’d slip into the printer before you began printing.

Oh, and the smell. Kinko’s always smelled awesome. Plus, they sold a lot of snacks and drinks, too. I’m fairly certain 10 year-old me bought a few Crystal Pepsis at Kinko’s in 1993.

I would love to have her DCSHG hoodie with the ears, DC needs to make it happen!

winner takes all! All what? No one knows!

I know @Green.Lantern! Winner takes all the ice cream, tater tots and kittens—FACT.

As for my picks:
Based on her healthy competitive spirit and drive for self-improvement, I’d give 100yrd dash, tug-o-war, the sack race to

3 legged race goes to Karen & Jess.
Frisbee goes to Zee.
Relay=all of them. #teamwork
And…
Capture the flag to Harley. For obvious reasons​

Kara might seem like a logical choice, but if you’ve seen the show you know she’ll likely be busy listening to music and snacking, instead of participating in anything remotely “nerdy”.

DC needs to make it happen!

Warner Brothers Consumer Products needs to merchandise the **** out of DCSHG.

Sure, there’s a lot of stuff out there for the original iteration as well as the current take, but they need to turn it up to 11. We need (for starters):

She’s saying “Right!”, but you can’t hear it at the speed she’s flying at.