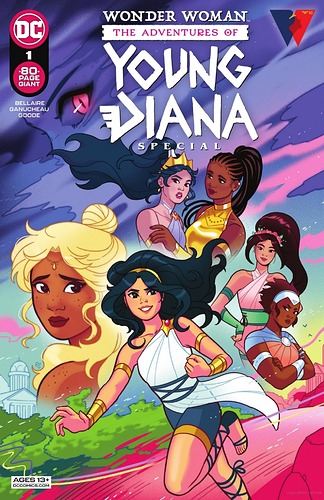 Fans of the Caped Crusader will be happy this week with a bunch of new issues from series including Batman '89, Batman: The Impostor and I Am Batman.

You could also travel back in time and take a look at a younger Wonder Woman in Wonder Woman: The Adventures of Young Diana.

Whatever your tastes, there’s lots to dig into this week!

I caught up with Justice League: Last Ride recently, so I’m looking forward to another issue. And I’m happy to see Captain Carrot in the archives!

Also, with 3 issues available, I’ll probably start looking at Batman 89, which sounds like a blast.

Hmm…let’s see what’s on the radio.

Bet @Don-El_52 is looking forward to it!

Also, Titans United #2 is listed as new, however…

…we already have the full, 7 issue series, as it was a DCUI/retail simultaneous release.

'Sides Captain Carrot, the other new issues of interest I’m down for this week are:

Gotta check out that Superman and Lois!

Yes…turn to the Superman side.

What is this side you speak of?

Why, its the side that features the franchise and character that the rest of the DC Universe truly owes its existence to.

Hmm. But what about the side the features the franchise and character that the DC Universe is literally named after, tho?

And why do there have to be sides! I love Batman AND Superman. But mostly I love Stephanie Brown!

Unless you’re Ra’s Al Ghul, next to nobody calls Batman “The Detective”.

Asking for a friend.

There don’t need to be sides, as I love ALL of the DC Universe.

However, facts are facts.

ponders if @millernumber1 is noshing on a deviled egg right now

Also, Titans United #2 is listed as new, however…

…we already have the full, 7 issue series, as it was a DCUI/retail simultaneous release.

Oops! I run off of a spreadsheet owned by the content team. Sometimes these things are done in error (hence why Titans United #2 is currently in the 'Latest Releases section). I’ll update now!

I have not, in fact, eaten anything today. I shall soon - but it shall be soup, not the delish deviled eggs.

Who is this friend, and why does he want to know?

But it is definitely called Detective Comics Comics, and that’s Batman’s title!