What Is Your Favorite DC Superhero And Sidekick?

Hey DC community, I was thinking, other than the trinity, who is your favorite DC superhero and sidekick. They don’t have to be a pair.

I’ll start this feed off with mine. I dont know what does it but for some reason I’m drawn to Booster Gold and Dr Fate.

But my favorite sidekick has got to be Kid Flash (preferably comic book Wally West version or Young justice version, but Bart is also pretty cool). He’s a speedster, and he’s funny. Yep that’s about it. He’s cool. Yeah.

Tough one! I like a lot of heroes, so I’m gonna go with my favorite sidekick. I think this is a tough one between Signal (Duke Thomas) and Tim Drake.

My favorite hero is probably… John Stewart I guess. But that is always changing.

insteresting I have never heard of Signal before and I consider myself to know quite a few characters. Whose sidekick is he?

And yeah I figured I’d see quite a few Robin’s on here. LOL

He is Batman’s sidekick. He is a meta human named Duke Thomas. He has been trained by four robins and Batman himself. He works in the day while Batman works at night.

Dick Grayson has been one of my favorites my whole life. His transition from Robin to Nightwing to the Caped Crusader is fantastic and he is a great character to grow with as a reader.

As for side kick, I don’t know if the Super Pets count, but Krypto is the best boy.

Also, this is a really good idea, @IGbigjoe.mobile. About time we hear everyone’s favorites in one post.

Thank you so much! Yeah I was honestly surprised this isn’t around yet.

Let’s be honest here everyone loves nightwing. He’s is probably one of my top 3 all time superheroes.

Id say that counts I love Krypto and Ace.

(Isn’t this such a badass Streaky?
Art by Elias Chatzoudis) 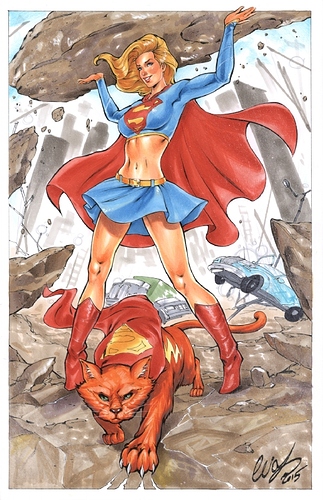 Favorite hero: The Question.
Favorite sidekick: Renee Montoya. (But don’t tell her I called her that.)

If I can’t say Batman the I would say that Swamp Thing because he has this beauty to him that draws me towards him and his world. I don’t know what or how he does it, I just like

As for Sidekick, I would say Dick as Robin would be my choice, I always like a little fun put into stories and some humor to kind of light up the dark mood. So Dick is always a good choice.

I also love Black Canary. It’s a shame she doesn’t get more attention. However I think Zatanna is my favorite female hero.

Well, skipping Batman, my second-favorite, Dick Grayson, sort of double-counts, as do Barbara Gordon and Wally West, so that covers #3 and #4. I like graduated-sidekick-type heroes.

Assuming we’re looking for a sidekick-type who I like better as a sidekick, I’d fall back on Cassandra Cain (borderline case; Batgirls are traditionally a little more independent than Robins) or Tim Drake.

I was thinking. “Hmmmmm,” “Who is my favorite female character?” Black Canary was the first who came to mind but Zatanna also popped up. I think its because her magic makes alot more sense than someone for say Constantine. But I’m just not someone who is all into the whole Justice League Dark magic users. It’s just too much for me.

I think my favorite female hero would have to be either Zatana or Mary Marvel.

give me someones else here, superman is part of the trinity and i expected those guys so give me another one. Skeetz is cool though

I’m pretty sure Batman and (Dick Grayson) Robin is old hat, but I’m gonna put that down since it’s what I’m most familiar with. They’re classic.

Does Kilowog count as a sidekick? He’s a Green Lantern in his own right but he’s rarely, to my (limited) knowledge at the forefront of the story. But I like Kilowog.