What Characters Do You Play As In Injustice 2?

So I started playing the game again here and there. So for those who play or have played, who are your mains? Or just who do you enjoy playing as?

For me, The Flash is hands down my number one main. Has been since the first Injustice game. He’s my favorite superhero and he just so happens to fit my play style perfectly. I don’t think there is much I would change with his gameplay.

Second main I have is without a doubt, Black Canary. She’s my favorite female superhero and I’ve been wanting her in the games since the first Injustice game. Like The Flash, her style is definitely up my alley and it just feels very much like Black Canary.

Two more I enjoy playing as are Captain Cold and Supergirl. I’ve been messing around with him because, well, he’s a Flash villain. More importantly, he’s arguably my favorite Flash villain. So I feel like I’m obligated at this point to play him. Lol As for Supergirl, I love the character and the Superman family in general. I was excited to see her in the game and she felt a lot better for me than Superman.

So far, those are my characters. I’m really excited to see who others play as.

My mains are batman and Harley Quinn

Aquaman’s my main, same as the 1st game, and Wonder Woman is my 2nd. I really appreciated the changes they made for her in the sequel and she just handles so much better overall

This definitely sounds like Console, Mobile is totally different

My mains are Batman & Scarecrow. Batman is better for when I feel like pulling quick combos in rapid succession, and Scarecrow for raw power. Plus, he’s voiced by the dream slasher himself. 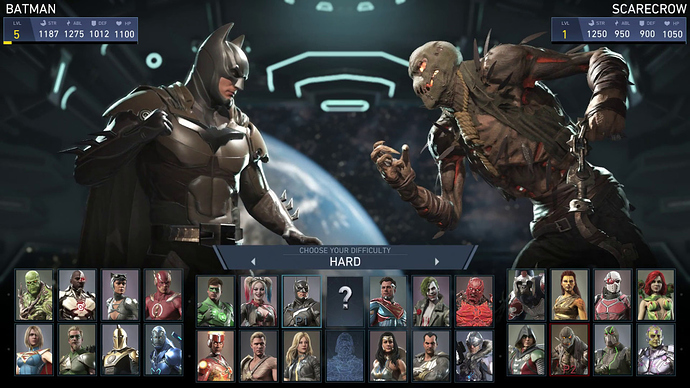 I play Batman and mollywhops all day from Harley Quinn.

Wonder Woman is my main. I tried to stick with Swamp Thing for a while and I just couldn’t understand him.

I really like the way Blue Beetle plays, but I never sat down to focus on him.

WW and Swamp Thing are my mains too. He’s difficult, so I switched to Ivy for a while.

The Flash and Harley Quinn for sure. I’ve played whole matches as either where my opponent hasn’t even been able to throw a punch. They both combo smoothly, especially Harley, she is OP

Simple, I play mainly as me, or my favorite batsy, but I always enjoy fighting him instead hahahaha

Flash and Green Arrow are my top two with Aquaman and Green Lantern being my other frequently used.

My highest damage team on raids happens to be: Black Adam/Shazam/Doctor Fate on the mobile game. I don’t have a console.

I don’t have a main per se, but the characters I had the best luck with online were Green Lantern and Superman. I tried really hard to master Darkseid and Dr. Fate before I stopped playing, but life and other games got in the way and I haven’t been able to play the game in a while. Might pick it back up again for fun if Injustice 3 gets announced.

Green Arrow, I think, is the overall easiest character to use. He’s the only one I got to level 20 just by using him.

Flash and Atrocitus, both really fun to play