What three DC Comics (or just characters is okay) have you read the longest-- off and on is okay! Make a note of it if those books/characters are also the longest runs you’ve ever had!

Titans (Teen and other wise) Yes, several long runs make an impressive number of comics-- but I got a lot as back issues
Batman - As many issues as I could get of any bat book, and really long runs starting somewhere around Len Wein.
The Flash - One of my earliest complete runs, and the full run of Wally

Haven’t missed an issue of:

Wow, my list could be so long. Batman, Superman, and Justice League of America were all early buys.

My peak collecting was the mid-70s to mid-80s and I collected just about everything superhero. I fell off in college and followed creators more than series. I bought full runs of Green Arrow and Warlord to fill in the In-between Era. Currently I buy trades on sale from ComiXology.

I also collected a lot from another company that starts with M (don’t tell @anon52107441, he kinda freaks out). I also buy trades and prefer hardcovers so I have Wonder Woman Omnibus 1-3 by George Perez, Gotham Central, All 3 DarkKnight volumes by Frank Miller, and Wonderful Woman 1-3 by John Byrne.

@moro that’s some impressive loyalty. Sounds like you have a fantastic collection.

Thanks @KamAndi80. I must confess my collection is digital (Comixology). I do have some hardcovers that make up a small but mighty collection though 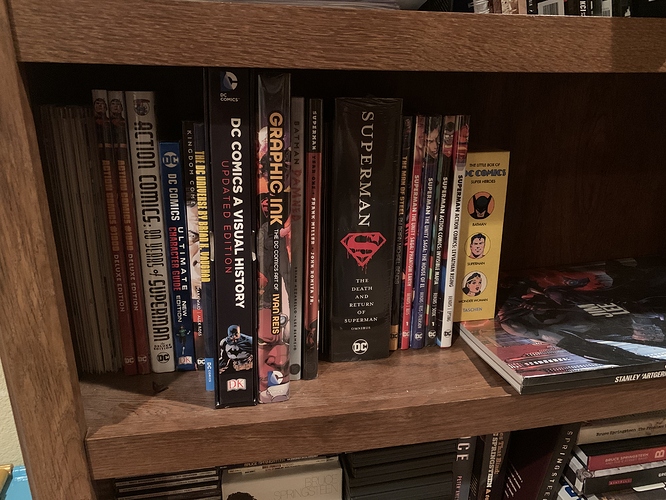 Action-
If it has been in print, The Legion of Superheros-
Detective-
Star Wars-

The first 3 I bought issue by issue were Hawkman, Green Lantern & Shazam. That was 1982. I think consistently tho, it would have to be the Teen Titans & Titans.

Ahhh I have that omnibus Superman: The Death and Return of Superman on my wish list

I don’t think I have ever read an ongoing from start to finish, unless it only lasted 30 issues or so. I have been reading comics loyally since the very early 80’s though. I only own a handful now though. I am primarily a digital reader now.

Those are my favorites.
But I love The Batman Adventures and other series too. I’ve followed Batman more for the dynamic villains.

Well I started reading as a comic book addict in 1964. I would go door-to-door asking kids if they wanted to trade comics. I recall one family with lots of kids they had piles and piles of those fabulous fat DC Giants from the time of Superman and Superboy. I also recall being struck by the Justice League yearly crisis and following those after that.

Then during College, 1974, a buddy that was a Batman fanatic got me looking at the early 70s Neal Adams stuff as well as New Gods but that of course hasn’t been continuous since then.

So, @MisfitCMJ , I would have to say the three continuous series would be Superman, Justice League and Batman since early 60s / mid 70s.

First of all, I am promoting DC on a DC funded server. Do not hold that against me.
Second of all, the order is Golden, Silver, Bronze, Modern, New52, Rebirth. Never say that blasphemous phrase again.
All in good fun

The first superhero comic I remember getting was based on BTAS back in the '90s and starred Barbara Gordon. I think Dick was in that one too… if not he was in the next one I got. I tend to follow specific characters more than series, so I’ve followed a smattering of series/stories starring those two (together and separate) over the years. By association Batman would probably come in third for me.

Forever? Nothing. I read Adventures of Superman from late 86/early 87 until it ended.

To be on topic, Future’s End came out when I was young, and I have read it nine times.
The other two would be TKJ and COIE.

The first comic book I got was Batman in Detective Comics involving the mechanical.dinosaur prominent in the Bat Cave.

Then I bought the final tryout of the Justice League of America in.The Brave and the Bold. I was instsntly intrigued by how different some of the characters lookeed. The sleekmlness of Green Lantern and The Flash versus the bizarre costumes of Jonn Jonzz and Wonder Woman with Aquaman in between the two looks. I loved the Power Ring of Hreen Lantern.and the speed of the Flash not yet recognizing how difficult that speed was in creating a story of more than three pages.

Lastly Superman. I didn’t know that Return to Krypton and the Imaginary story Death of Superman were written by Jerry Siegel the creator of Superman. The second wife of Siegel who had done the original poses for Lois Lane had shamed DC Comics to rehire her husband after he had been fired for suing for ownership of Superman. These stories showed his great passion.for his creation.