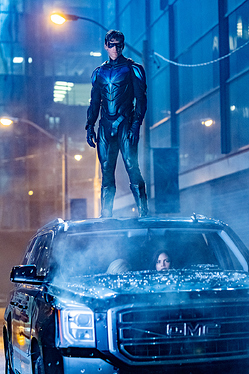 The conclusion of TITANS, Season 2 is upon us, and we are ready for full NIghtwing action as the team battles Deathstroke - for some, maybe the last battle of their lives.

If you haven’t watched episode 13 yet, make sure you do, and come back here to let us know what you thought!

Nobody ever says Nightwing aloud, Slade dies like a dog, Jericho never shows up again after he goes into Rose, Gar is still only tigers, Conner should’ve saved Dawn, etc. The writing is atrocious but yet I keep watching. At least the Nightwing/Ravager vs Deathstroke fight was decent.

The episode was alright imo but i was disappointed with several decisions the writers made like defeating/“killing” deathstroke so easily and early on in the finale even though he was the main bad. The other is the ridiculous way Donna died smh​

…we need better writers this show’s pacing and story needs to improve because rn it is still very messy.

Right? We keep watching for whatever reason even though some of the decisions the writers make are sooo bad…

I feel like the ‘finale’ should’ve been 2 episodes of content to wrap things up. Part 1 wrapping up Deathstroke and Part 2 wrapping up Cadmus. Everything felt rushed imo especially with Slade defeated in the first 12 minutes. I was worried it would be rushed with the season setting up so many plot threads including in the last half. I left very mixed with the finale which sucks since I really liked last episode and the set up for the finale.

Exactly! they should’ve made it a two parter but then again the entire writing for this show is hella messy imo…

I’m a bit confused on these characters stance on ‘secret identities’. Some of them wear masks to hide it right? We get it’s not covering much of their face but like other shows + comics it’s the suspension of disbelief that people can’t recognize them but Dawn walked into a crowd with her mask/goggles off not trying to hide it at all. Last episode during the cage match with Hank they were off but it ended up making sense since it was all a dream but in this I was just like “wait…what are you doing??”

I was happy with it. Dick said Deathstroke was dead, a guy who was being mentally bombarded and fighting 2 excellent fighters at the same time… Feign death and recoup seems like a pretty solid plan for a guy who can heal himself. For sure Conner could have saved Donna but he’s not exactly mentally stable or aware at this point so that doesn’t seem totally unreasonable.

Overall I feel like the series came together in the end. I liked the individual episodes but the flow was pretty choppy. There’s a reason most stories dedicate portions of each episode to various individuals instead of focusing on telling their full story all at once. To be honest that normally bothers me but seeing it but, the titans way, where characters would get their own episode and you don’t really see people for weeks kinda leaves a lot to be desired.

I don’t think the death of Donna Troy give that character closure, I feel like she could have totally seek it out elsewhere. But what pisses me off the most is that there are currently two superhuman players on the Titans that come from very distinct races in which super strength and super speed is equal to their character, and one of them is kind of immune to electricity. Don’t know why he didn’t stop the tower but sure.

First, the bad moments: Deathstroke’s defeat felt too quick, Jericho’s situation also needed some kind of resolution after the fight, and Donna’s death felt underwhelming. Rachel leaving with Donna to Themyscira is also a bit weird since it implies that she might bring Donna back from the dead, nullifying any significance her death had, or it may just be a way for the writers to take her out of the story, but either way it feels like her story was abruptly cut short/derailed. There was one scene that felt extra weird editing-wise, where Dick first confronts Deathstroke. Deathstroke starts to shoot but gets attacked by Dick up close despite Dick being on top of the car, then Dick is able to talk to the girls in the car despite being so far away, next thing you know he’s right up in front of it again, and we see him walking towards Deathstroke, who is several yards away.

The good moments: Dick finally making the Titans feel like a family, talking to Gar about what had happened, telling them that through dark moments they need each other, helping Conner through his brainwashing, being comforting to both Rose and Jericho. The episode finally explains why Mercy would send Gar into a coffee shop to randomly kill innocent people. This felt like a pretty good plan, have Gar establish a crisis that they would “fix” with their own weapon, and sell to the highest bidder. I believe Rachel creating a “Bruce Wayne” hallucination more than Bruce actually using such weird tactics to band them together, it wasn’t perfect but I’m willing to see it more positively than not.

It was just dumb and ridiculous imo

Yup everyone saying it was Rachel behind the Bruce-Elko things were right. I thought it was crazy either way but didn’t expect Rachel to really be behind all of it. That was a crazy reveal. The Gar and Dick scene was one of my favorite parts of the episode + plus every minute Dick was in the Nightwing suit. Can’t get over with how amazing that suit looks. I’m also happy with the explanation of why Mercy was doing all the things she was (to show off Superboy’s powers for the investors).

I think this is their way to pay homage to her weird and complicated history. Donna dying with the Titans and being brought back isn’t something I would find weird

Was I the only one who found it weird that the crowd was so happy towards the Titans? For all they know Superboy was fighting a “wild tiger” to save them, then the Titans show up and have a random brawl, and then they all just stop. I’m surprised nobody was just outright blaming them for the destruction.

At least they didn’t leave us with another cliffhanger. The writing aside…Nightwing was badass and it was about time Dick showed up. It could have been better but I’m excited for next season. Really hoping we get Wally and or Roy. My biggest problem was the way Donna died, and why did she die. Was the actress just leaving the show?

Hate S2 finale so very much. “Donna Troy” was my first episode and that’s what got me watching this series. I had high hopes for the first live action version of the character, but the show bungled her completely. Deathstroke almost made mincemeat of her (but mere human Dick can go toe to toe with Slade much longer) and despite trading punches with Superboy all it took to kill Donna was…electricity? It’s such a slap in the face to her fans as well as the Wonder Woman legacy. Once again, the women are shown as inferior to the men in the Trinity and their male protégées. I am so done with this nonsense. Bruce didn’t even mention Diana in his convo with Dick, and one would think Bruce would say something about Wonder Woman’s reaction to the death of her sister/protégée. Unbelievable.

I’m just hoping to see more actual villains in the next season. We had Shimmer make a cameo, Blackfire is being set up as the next big bad, Dr. Light was decent, but got killed pretty quickly, and Mercy just made the Titans fight each other, leaving Deathstroke to be the only real threat against the Titans. The biggest issue for me is that the majority of conflict this season came from within the Titans, we need villains that feel more impactful IMO.