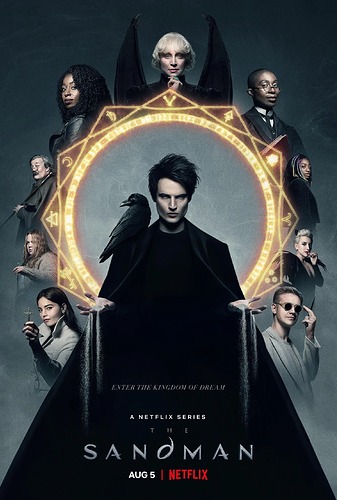 Not a dream! Not a hoax! Not an imaginary tale!

Neil Gaiman’s revolutionary Sandman series comes to stunningly beautiful live-action life on Friday, August 5th and the best way to enjoy it is with your fellow Sandmaniacs, with @CassTheStreet and I as your co-hosts.

Here are the details on how you

can live the watch-along dream:

What we’re watching: Season 1 of The Sandman, a Netflix exclusive series.

When we’re watching: Each watch-along begins at 6 PM Pacific/9 PM Eastern, and will occur on the dates listed below:

Tuesday, August 9th: Chapter 3: “Dream a Little Dream of Me”

Wednesdays are off-days, as @CassTheStreet is hosting their Titans watch-along that night. You can join the titanic fun of that shindig right here:

Whether you’re a die-hard Sandman fanatic that knows the comics backwards and forwards, or you’re brand-new to the fun thanks to the TV series, @CassTheStreet, the @DC-TV-And-Movie-Club and I look forward to seeing you here throughout August, as we dream a dream with Neil Gaiman’s evergreen comic book epic brought to epically realized, live-action TV life…

ALSO: Whether you’ve followed Sandman in the comics since Day One, or are brand-new to the franchise because of the TV series, do please check out our friend @Jurisdiction’s look at the source material that inspired the show:

Hello to wonderful people on this community! Welcome to the crossover of a lifetime! While the @ObscurityofDCClub’s club owner, @Jurisdiction, will be hosting this Read-A-Long, the Watch-A-Longs will be hosted by @Vroom, and the DC TV and Movie Club’s (join here) @Mister.Miracle and @CassTheStreet. You’ve read the title of this thread, so you know what going on. Now… who’s ready to ENTER SANDMAN? What do you mean that’s trademarked?! Now… who’s ready to READ SANDMAN? [Dream_006] AGE SUGGES…

The official trailer for The Sandman, season 1: The complete soundtrack playlist for The Sandman, season 1:

Not an imaginary tale!

Wait… Aren’t they all?

In any event, 3/4 of the Golden Girls sure are excited about this coming Friday:

And tomorrow night, the watch-along fun shall commence.

This will start in a little over 30 minutes! Looking forward to seeing this with the community!

Well, it is, as I’m sure you’ve heard, very faithful to the comic, although I would say, no spoilers, that characters on both sides of the conflict in ep 1 are more sympathetic.

Interesting – I haven’t watched any of it yet, since I wanted to come here fresh and I have been working all day, so I’m curious to see what the differences will be.

In the first few minutes, I learned I’ve been mispronouncing quite a few things, so that was… In the immortal words of John Green, "… A review, don’t know if it’s positive… "

Well only about 3 minutes until we start to find out

all at the same time wee

ooh i love the wb logo