Hello to wonderful people on this community! Welcome to the crossover of a lifetime! While the @ObscurityofDCClub’s club owner, @Jurisdiction, will be hosting this Read-A-Long, the Watch-A-Longs will be hosted by @Vroom, and the DC TV and Movie Club’s (join here) @Mister.Miracle and @CassTheStreet. You’ve read the title of this thread, so you know what going on.

Now… who’s ready to ENTER SANDMAN? What do you mean that’s trademarked?! 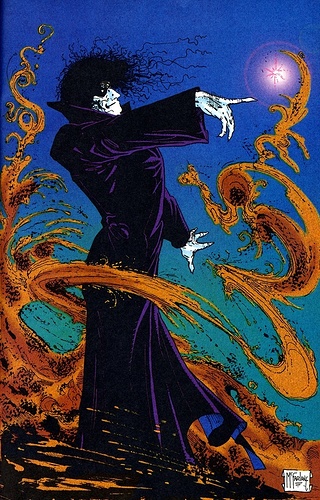 Description from Fansided: The Sandman is easily one of the most beloved graphic novels of all time. It revolves around Morpheus, the anthropomorphic personification of Dreams. Throughout history, myth, and legend, the character has gone by many names, including Kai’ckul, Oneiros, Sandman and simply Dream. We follow him as he serves his purpose as one of the Endless, a dysfunctional family of siblings who each preside over a different part of the human condition, and came into being the moment they were first experienced. Besides Dream, the members of the Endless include Death, Destiny, Delirium (formerly Delight), Desire, Despair and Destruction.

Now that that’s over with, here are some discussion questions!

Not sure what this means, but I hope it’s a compliment lol

Be sure to check out the WAL’s too! The thread is now up:

[image] Not a dream! Not a hoax! Not an imaginary tale! Neil Gaiman’s revolutionary Sandman series comes to stunningly beautiful live-action life on Friday, August 5th and the best way to enjoy it is with your fellow Sandmaniacs, with @CassTheStreet and I as your co-hosts. Here are the details on how you

I am so excited for this! Feel SO Giddy Right Now

Been missing my SuperFanFriends… Now, we have this Amazing Story to Enjoy Together! Hooray!

We’re excited to read with you too!

First of all, I don’t think that’s his power, anymore than Death could make someone stop dreaming. Second of all… In the immortal words of Delivery Doug, “… That’s the end of that sentence.”

Well, it’s kind of like Clark Gregg said about Jaimie Alexander guest-starring towards the end of Marvel’s Agents of S.H.I.E.L.D. Season 1: Before then, they had just been doggy-paddling. I think that having these guest stars helped get the series green-lit and commercially successful, and then with book two, Gaiman took a hard right. If reception to The Doll’s House had been more negative, Gaiman easily could’ve shoehorned more DC characters in future, but instead, found he had some flexibility.

I haven’t the faintest idea, although I suppose WWI factors into it somehow.

Because… You know… The Sandman… “He’s a fairy story, Hettie.”

Well, I think he set out to tell a story about dreams, and came across, among others, the Sandman, Morpheus, and Kai’ckul. And in a way, I think he probably liked having all these extra personas that could inform our preconceptions about the character, and then he could toy with our expectations.

I am not sure he truly had that ability based on the interactions with other human characters in the series. I think the only person that could technically give that is Death and unfortunately they didn’t catch her. I may find out this is different as I continue to read the series, as I am on issue 9 now. I intend to read the 75 issues that are here for the original series.

Originally, when the title premiered it was not in the Vertigo imprint. It was in the DC Universe proper from what I have read, so it makes sense that they would have had small connections to the main DC Universe. This means that the superheroes from DC proper should show up. This is why I like that the villain at the beginning was a JLA villain. This creates a unique feel though to the overall series, as it feels somewhat removed to the real DC Universe, but these nods actually create atmosphere and connection that grounds the series a bit. I also think DC proper probably asked him to have these characters appear because the concept was a harder sell for them, I imagine. So I am not sure that Gaiman had much choice in their appearance at the beginning. Later, if they appear, he probably had more say.

I felt that he wasn’t honestly trying to escape that hard for a chunk of the story, which I would be interested in understanding more of the why of that. I think the time skips are important to set-up what was going on in the “real world” during that period of time. Such as people not being able to fully sleep or sleeping almost endlessly. Then we see them wake up after he is finally released. Gaiman had to show his importance in the world and I think the time skip allowed to show the importance of dreaming in a way that just having him get out immediately wouldn’t have allowed. It creates a lot of potential stories that would have been otherwise impossible or improbable.

It is the dream connection to me. I have always heard “The Sandman” attached to dreams and that the sandman puts sand in your eyes to make you sleep. So him being called Sandman is a nice nod to this lore of someone that puts us to sleep at night. I don’t think he is supposed to have a deep connection to Wesley Dodds, as he is his own interpretation of “The Sandman”. Though it was nice to see a nod to the other superhero Sandman.

I think he chose to do this for grounding purposes. People like some familiarity, so it probably helped to sell the series at first that people could at least think about their Greek mythology characters and knowledge. I really see this as a hard sale to DC that was luckily successful. I love what Gaiman did here in creating enough familiarity to keep people engaged with what could have been a very hard to get into series otherwise. It is well written and engaging. It has enough “differences” to make it unique, but enough grounding to make people feel safe in the story. I really appreciate the balance Gaiman gave this and in a less skilled writer this could have been epically bad.