What’s your thoughts about the joke at the end of the killing joke? Here’s the joke the joker tells batman. 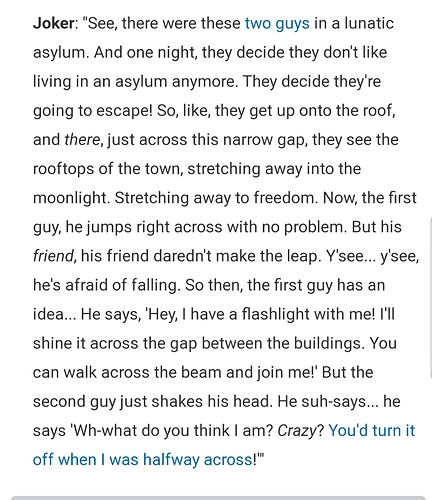 Talk about a lack of trust! I never did got the joke, but Batman somehow did. I think it was the only time the Joker ever made Batman laugh.

I think it’s about how Batman has fallen into the flawed premise of The Joker. That by dressing up and fighting him across rooftops and through amusement parks ad nauseum, he’s bought into Joker’s own game. The “flashlight bridge” makes no sense, but the second inmate — Batman — is trying to find the flaw on the first inmate — The Joker’s — terms. It’s a sick joke about how Joker may be crazy, but Batman is even crazier for following his rules.

Batman laughs with The Joker at the futility of it all. He’s trapped on the light bridge.

And then, at the bottom of the last page, the laughing stops, even as the sirens continue.

Recall now that The Killing Joke was never intended by Alan Moore to be part of canon. It was its own thing, and its success later saw its incorporation into the ongoing universe. (Much like, say, his other works like Watchmen, Promethea, and Tom Strong.)

So while Barbara’s paralysis was enshrined in canon, the original subtext of the ending was lost:

Completely off panel, in direct defiance of Commissioner Gordon, and at the end of his well of patience and restraint, Batman had killed The Joker.

I love discussing this book! I’ve gone back and forth with myself over who is ultimately holding the “flashlight.”

See, there were these two guys in a lunatic asylum…

Bruce and whoever the Joker was before his acid bath. The asylum is the world in general.

Both make a decision to help them deal with the tragedies life has dealt. The Joker fully embraces chaos; Bruce vows to beat it into submission.

So, like, they get up onto the roof, and there, just across this narrow gap, they see the rooftops of the town, stretching away in the moon light…

The narrow gap is the small difference between their brands of crazy.

Now, the first guy, he jumps right across with no problem. But his friend, his friend didn’t dare make the leap. Y’see… Y’see, he’s afraid of falling.

Joker is Guy #1 perspective: Joker crossed the line of sanity without reservation. Bats, on the other hand, is in denial.

“He’s afraid of falling” – Bruce won’t accept that his methods are just as crazy as those of his enemies; to do so would mean he’s more like them than he wants to admit.

Batman is Guy #1 perspective: Bruce is convinced he’s the one who’s taken the right path/made the right leap. If you look at the dialogue immediately before this joke, even after everything Joker has done throughout this story, Batman is still trying to rehabilitate him.

“He’s afraid of falling” - Joker is afraid, or perhaps incapable, of believing that’s possible. Throughout The Killing Joke, he constantly tried to improve his life, only for things to get progressively worse. He’s afraid of taking a chance and believing Batman can save him.

So the first guy gets an idea. He says, “Hey! I have my flashlight with me! I’ll shine it across the gap between the buildings. You can walk along the beam and join me!”

Joker is Guy #1 perspective: Basically, that’s a summary of the Joker’s motivation.

As HCQ put it, Joker wants Batman to play this “game” his way. He wants to show Batman (and the world?) the truth of his perspective: In the end, nothing one does really matters. Life randomly dispenses pain and death and misery, and rewards no one.

Batman is Guy #1 perspective: Basically, what was said before. Throughout this book, Bruce has desperately clung to the belief that the Joker is not beyond redemption.

B-but the second guy just shakes his head. He suh-says…he says, “What do you think I am? Crazy? You’d turn it off when I was half way across!”

Bruce is Guy #2 perspective: The second guy’s response is as crazy as the first guy’s proposal.

Pun: Bruce’s response to life’s chaos is as crazy as the Joker’s solution. They’re both nuts.

Joker is Guy #2 perspective: Joker is convinced that if he did try to do things Batman’s way, it wouldn’t be successful.

After that, well… this is where it gets more unclear. I’ve never come to a hard conclusion about whether or not Batman killed the Joker, and I don’t really want to. I prefer the ambiguity! 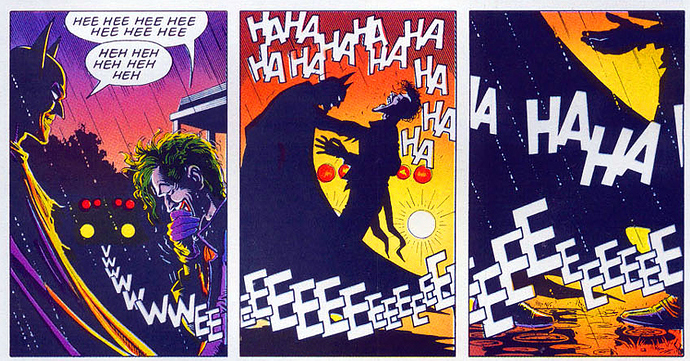 But I LOVE these panels.

Panel 2: Bruce clutches the Joker for support as he laughs (Y’see, he’s afraid of falling)

Panel 3: Joker extends his palm to Bruce in a “Come on, take my hand” kind of way. (For me, easily one of the most chilling panels in the entire comic.) 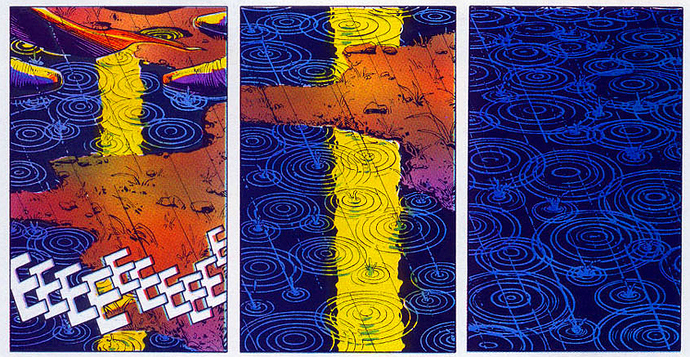 Then the “flashlight” goes out. The bridge has been broken.

If the light/bridge was built by Joker, it represented a path to madness. Joker cutting it off could suggest Batman refused his handshake.

And that’s the twisted joke of it. They both realize they’re crazy, and neither this knowledge nor their efforts has changed a damn thing. It’s like those rings of puddles. Constant ripple effect, no conclusion. Life is chaos and then it kills you.

Or, if that light represented Bruce’s attempt to lead Joker to a saner path, it could suggest he finally gave up. Like HCQ mentioned, Batman realized the futility of it all and turned the light off when Joker was halfway across, either murdering him or, at the very least, abandoning any hope of redeeming him.

EDIT: I mistakenly kept referring to the dudes in the joke as “inmates.” Fixed that. I blame years of comics for making me automatically connect Gothic lunatic asylums to criminals.

@CynicalPink that’s a flawless dissection of the joke. Personally, I never thought of Batman being the second inmate, but that explanation really gives the joke a whole new meaning. I might just have to dust off my copy of the Killing Joke and give it a reread. Kudos!

@Batman0803 Aw, thank you for reading through that ramble! If you do wind up re-reading TKJ, would love to hear any thoughts! 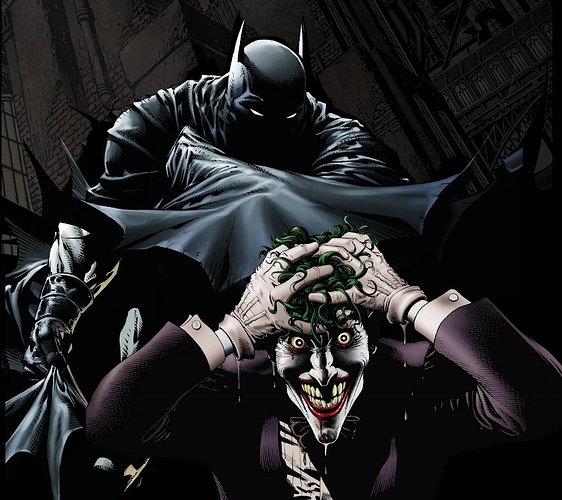 Came across this pic on my phone and for some reason it kinda makes me think that batman and Joker are the same 2 sides on a devastating coin set to clash with each other no matter what either one does to either rehabilitate or try to make insane. Thoughts anyone?

I’ve read TKJ probably 50 times and seen the animated movie twice in the theater and lost count how many times at home. I realized something from TKJ and Joker, both joker’s have a very rocky upbringing, suffer devastating losses from loved ones, and both characters seem to go insane almost the same way, with killing and standing up for one’s self. Thoughts? 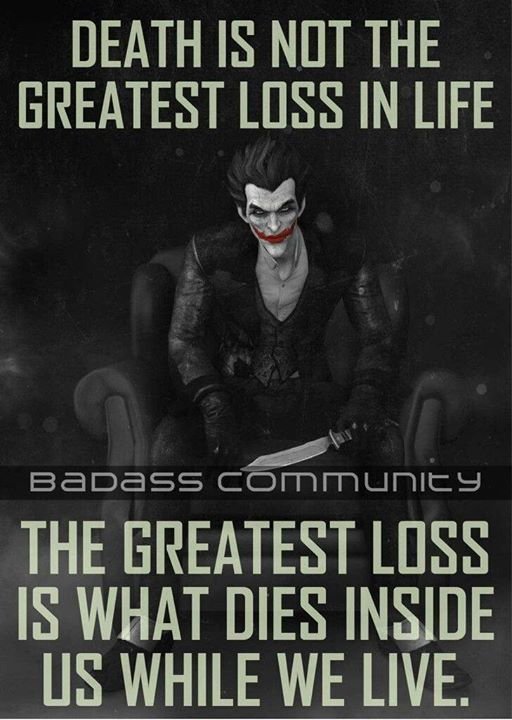 This picture i found on my phone may sum up a little what i said.

What an interesting thread, with so many unique perspectives on The Killing Joke! Great topic of conversation, @rabidlaughter!

My take is more literal, referring to the title and the final “joke” as it applies to the story leading up to it.

THE Killing Joke: The main character is a failed standup comedian and mentions how “there are girls on the street that will earn that in a weekend without having to tell a single joke.” In the final panels, upon telling his joke to Batman and getting a laugh (while also cracking himself up), it seems to potentially imply that he was successful in his comedy - finally achieving a “killer joke” (one that makes people laugh). 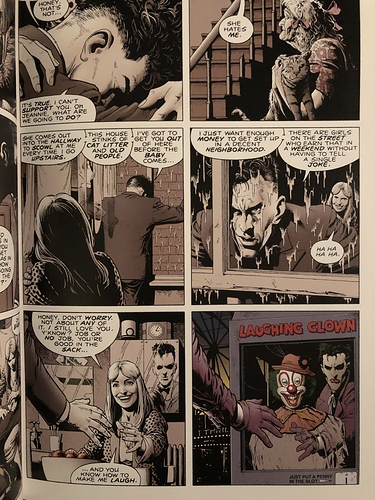 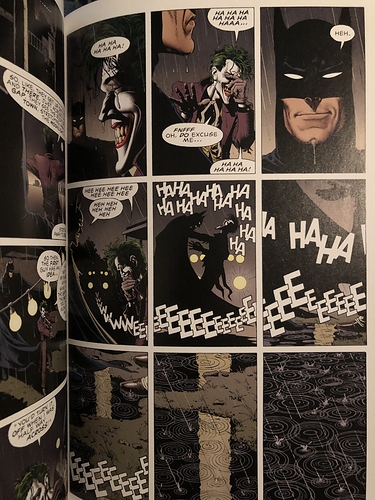 The KILLING Joke: Both in the introduction and final pages, The Joker and Batman discuss their relationship with Batman saying “We don’t HAVE to kill eachother”, to which The Joker tells his final joke… 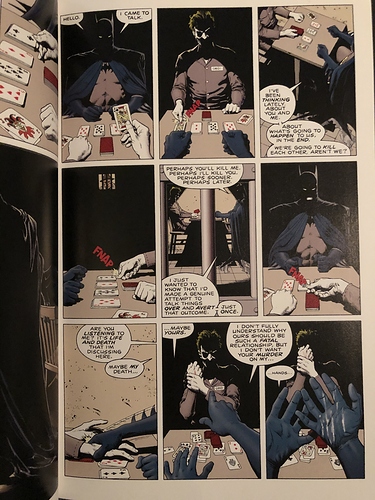 image3024×4032 3.44 MB
Note that this is not actually The Joker but it still begins with Batman attempting to talk about their volatile liaison regardless. 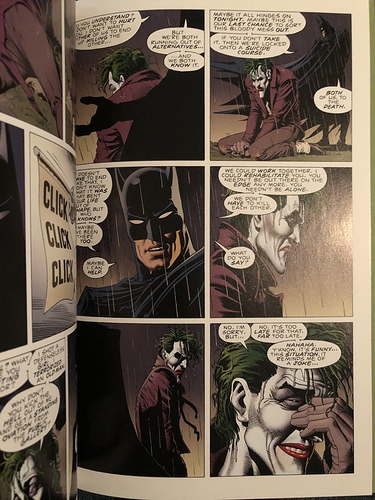 The Killing JOKE: The funny part of the situation is that neither will ever kill the other, as their relationship is either being planted steadfastly on their own side resulting in a neverending stalemate between two equally opposing forces. The Joker finds the humor in this situation, as he does with most things that many others wouldn’t (another nod to his unconventional comedic roots).

These are all great interpretation! I took it as Bat’s and Joker are the 2 guys both being insane in their own way. Bat’s being the first guy trying to help the Joker escape this madhouse. The flashlight part and the 2 of them laughing at the joke I took simply as the 2 of them realising that in the end it’s hopeless and they can’t help one another because they are both crazy. I really like @CynicalPink breakdown and interpretation with Joker being the first guy and @HubCityQuestion with the flashlight being Bat’s giving up.

Mark Hamil to voice the joker

This is my biggest compliant about this book, the rational mind with all ways try to rationalize something in order to make sense of it, the problem is, the more you know, the less scary it is.