Inspired by @KeyFamily’s most excellent post on preferred comic styles. Here are all the little artistic gems I found in The Killing Joke.

Some are obvious, some are me overanalyzing, but I’d really enjoy hearing everyone else’s thoughts or discoveries.

Goes without saying, but spoilers ahead. 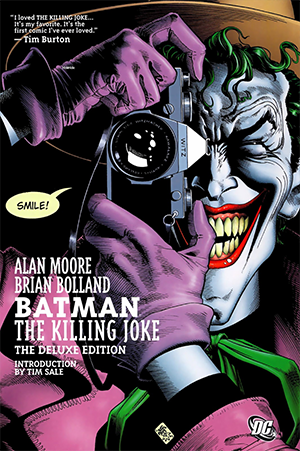 One of the things I love so much about this book’s art is that everything feels calculated, starting with the cover itself. Essentially, we’re being pulled into the story and placed in the same position as Barbara - we’re victims.

In the Joker’s eyes, believing we have any agency in our own fate is laughable. No matter what we do, we’re all helpless to life’s indifference and chaos. “Sh*t happens, then ya die.” As far as he’s concerned, we’re a part of the killing joke.

Also, I read that the brand on the camera’s lens (Witzmacher) translates to “Joke Maker” in German, haha.

First and last panel of the book: 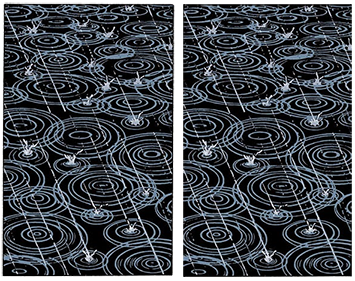 Identical. I love the cyclical nature of it. I don’t believe in a definitive conclusion to the book (maybe Batman killed Joker, maybe not - longwinded viewpoint here), but I think this can be taken to suggest the latter. Batman didn’t kill Joker; they’re doomed to repeat this mad game of cat and mouse, their actions endlessly overlapping, rippling, multiplying along the way. 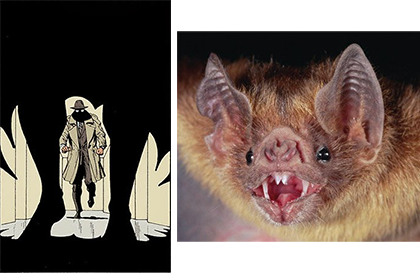 To me, this shot always looked like Jim was literally being swallowed up by some maw of darkness. I cherrypicked the bat photo to prove my point. 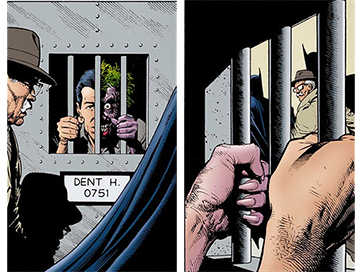 Other than the Joker, the only inmate shown is Harvey. The bar splitting his face in half, the monstrous hand versus the human hand – Two-Face wasn’t featured on a whim.

In a symbolic sense, he represents the nature and characters of this story (good vs evil, sanity vs madness, law vs chaos). In a more literal sense, his imagery foretells Jim’s fate: Caged and facing the choice of becoming man or monster. Gordon’s glance back can even give a sense of premonition.

And then there’s the way Batman’s shadow is drawn nearly on top of him. A highlighted contrast between Jim’s light and Bruce’s darkness? A stylistic choice to add to the claustrophobia of the image, as it traps Jim between the monster and the Batman? Etc. 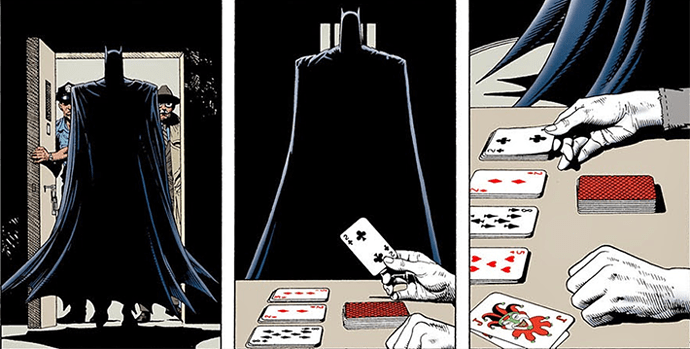 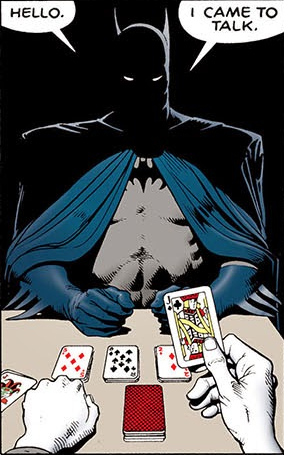 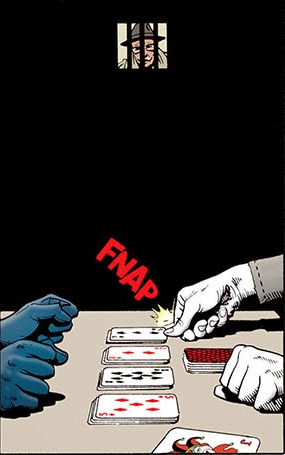 More foreshadowing of Jim’s fate: caged by the Joker, caught between the game of two madmen.

Page 4 con’t, alongside two panels from the last page:

And yet more foreshadowing. The similarities are obvious, from the metal bar and beam of light, to the weird puddle following Bruce around.

What’s more interesting is that by the book’s end, Bats and Joker have traded positions.

Okay, that’s only 4 pages in and I’m beat. To be continued! 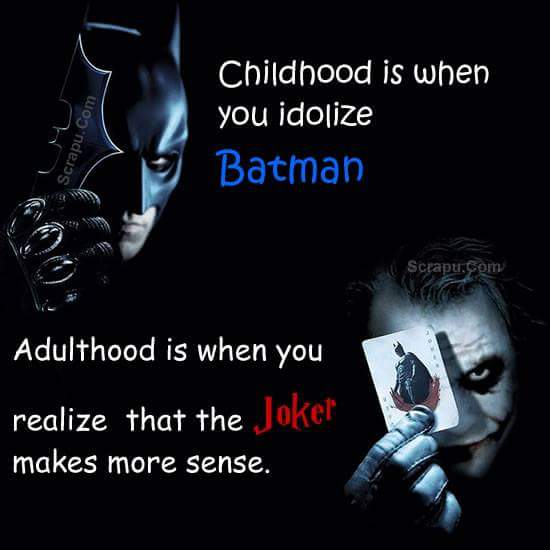 Thought this pic kinda made sense after reading your post. Tell me what you think?

My thoughts are: Scary!

Or for a very oversimplified answer: I think Joker’s viewpoint is more realistic, but Batman’s is more important.

There are probably a lot of “Jokers” out there - people who have had so many bad kicks that they’ve adopted a “f**k it” attitude toward life, themselves and others. Joker is an example of this dialed up to maximum overdrive.

I’d rather continue to be inspired by the Batmans (or whatever superhero of choice). Those who realize they can’t always save the day, but they’re going to try anyway.

I stand by my view that any Joker origin story “, reduces the Joker as a character. By building any sense of empathy with the character, the Joker is less villainous.

This is why and shown long before Killing Joke that Batman is the most psychologically “broken” character in all of comics.

Ambitious breakdown on your part, @CynicalPink

@DeSade-acolyte - pretty sure I’ve responded to similar posts of yours before, so apologies if I’m repeating myself!

I sincerely think you’re a nicer and more humane person than I. It’s impossible for me to define a tipping point, but when a person’s actions reach a certain level of horrific, I don’t think I have it in me to feel empathy for them, regardless of their childhoods/bad luck. That makes me feel like a lousy person to type that out.

Anyway, in the case of the Joker, this is especially so. As much as I fling around the words “insane” and “crazy” in these posts, in most stories, I think Joker is more malevolent than nuts. He seems fully aware of how evil he’s behaving. He’s not a man whose mind was broken; he’s a man whose temper was.

All that said, while I love Joker origin stories, I never want one to be made definitive canon, because I agree with you that it reduces his character.

Joker is my favorite villain because of how terrifying he is.

He’s terrifying because he’s a maelstrom of chaos and people’s darkest impulses.

If we knew the why behind the what, he’d become more predictable; we’d be able to put a tighter pin on what motivates him. Not knowing makes him seem less human and more of a force of nature, ready to strike and destroy at any moment, without warning, and there’s little you can do to prevent the loss until it’s too late.

Ambitious reading if you made it through that whole post, @keylimetyrant! Thanks for checking it out.

I’m pretty sure you are the nicer & more humane of the two of us.

I think that once someone develops any level of empathy with a character, even after a tipping point of horrific acts has been reached, empathy can not be to reduced to zero in human psychology. Very near zero, say 0.1%, however I think a slight bit always remains. So I see your point, and it could be reduced by a great deal, but, absolute zero, I am not convinced.

I do think we are on the same page in terms of Joker’s behavior. I would go so far as to say he is one on the most sane characters in the DCU. He knows exactly what he is doing and just doesn’t give a bleep what anybody else thinks about it.

Another thing, where we have common ground. I think post Killing Joke, writers/artists/editors/readers saw him as the strictly malevolent force rather than a character of sheer chaos and/or randomness.

I think Denny O’Neil put it best. (And I’m paraphrasing here, but I think the quote is pretty close)

Having any backstory really does a disservice to him. Whoever it is wearing that red hood that falls into the vat of chemicals is irrelevant. He emerges from that experience a fully formed character of the Joker. Who he was before is irrelevant. At that moment he makes a conscious choice to embrace pure chaos. That is a why I view him as a very sane person.

It is interesting that he kinda follows (and this is merely a comparison of the allegory, so I hope people can understand it in that way) the creation myth of Osiris, he is born from a virgin, Isis. (we have no idea how he got here.) he undergoes death (the vat of chemicals) and emerges fully formed, resurrected as a new creation. A “god” committed entirely to chaos, as Osiris’ resurrection when he became the “god” of the underworld.

Inspired by @KeyFamily’s most excellent post on preferred comic styles.

Awesome shoutout! Thank you so much, @CynicalPink! I’m happy to see that you created this thread! Another topic related to The Killing Joke is @Reaganfan78’s Barbara Gordon, if you haven’t already checked it out.

The art is incredible and the cover is also amazing, but check out the physical book! I took the paper jacket off to read mine and remembered these gorgeous details. 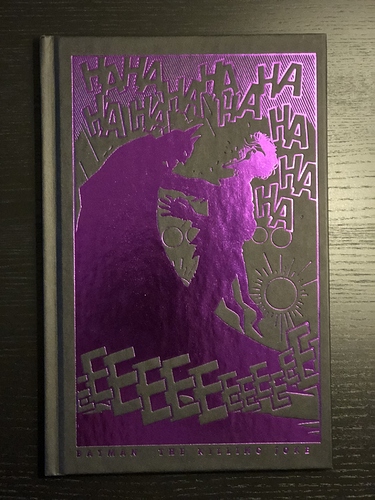 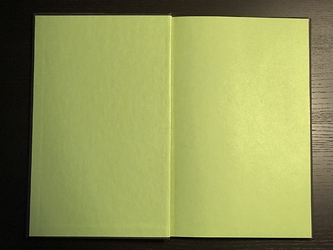 I love the shiny purple imprint and green interior coloration - a nod to the classic Joker palette. It really sets the tone for what’s in store and solidifies itself as a collector’s dream even before “stepping inside”.

Very near zero, say 0.1%, however I think a slight bit always remains.

I’m giving you this, because you’re right. Nothing is ever 100% all the time, and if, say, the Joaquin Joker movie ended with Arthur sobbing to the social worker about having been tied to a radiator, I probably would have felt a bit heartsick. Not forgiving, but still sick over it.

And we can just agree we’re both decently okay people.

I would go so far as to say he is one on the most sane characters in the DCU.

Agreed, a hundred percent! That’s part of why I’ve always been so intrigued with his clashes with Batman. Here’s Bruce, who’s a symbol of rigid discipline and logic, and when it comes down to it, he’s arguably the more obsessed and less sane of the two.

Dennis’ quote and the mythos comparison are excellent and really match my perception of him. I’m so behind in comics, I’m a little afraid of approaching the newer stuff, as I heard he’s become more “gangsta” violent rather than chaotic?

@KeyFamily That is gorgeous, and makes me want to buy the Deluxe version! My copy is a second or third reprint that’s bagged and boarded, bought used about five years back, and doesn’t look nearly that pretty. The colors don’t even match what I’m sharing in those above images. The original was borderline psychedelic in some places.

Edit: PS! I voted at Reagan’s post a few days back, but I didn’t jump into the conversation yet. Maybe I’ll do that now, but i have a feeling most of the good stuff’s already been said. 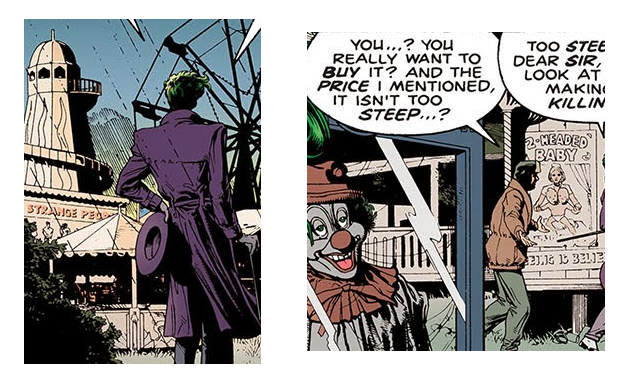 “Strange People”/“2-Headed Baby” Not groundbreaking allegory, but again, just the kind of attention to detail that Bolland instills in all his frames. 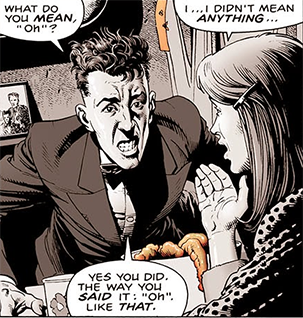 I’ve got nothin’, but was wondering if anyone knew what the heck she’s making in that bowl? Squid? Also, why is there fly tape hanging from an exposed lightbulb? And a fireplace in an apartment that’s so low-income that the kitchen and bathroom sink appear to be one and the same? Maybe it’s all indicative of how messed up Joker’s memory is. Or a sign that I really need to stop this manic detail combing every time I read a comic. 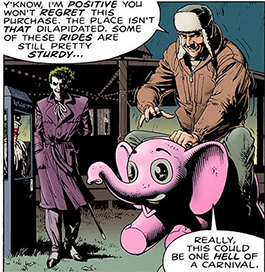 Pink elephants = hallucinations. This story’s narration might be faulty, or Cousin Eddie over here is delusional for thinking he could actually swindle Joker. 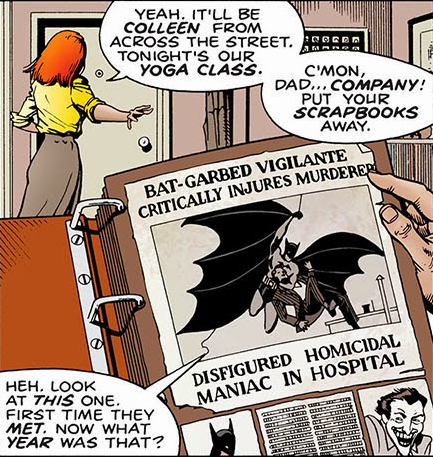 Easter egg! The news clipping’s photo is actually the cover of Detective Comics #27, which featured the debut of Commissioner Gordon. 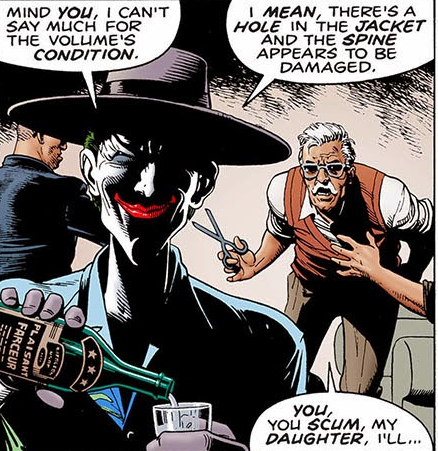 That is gorgeous, and makes me want to buy the Deluxe version! My copy is a second or third reprint that’s bagged and boarded, bought used about five years back, and doesn’t look nearly that pretty. The colors don’t even match what I’m sharing in those above images. The original was borderline psychedelic in some places.

Yep, mine is the Deluxe Edition! I didn’t realize at the time how special it was but I’ve come to treasure my copy over the years. You should definitely pick one up!