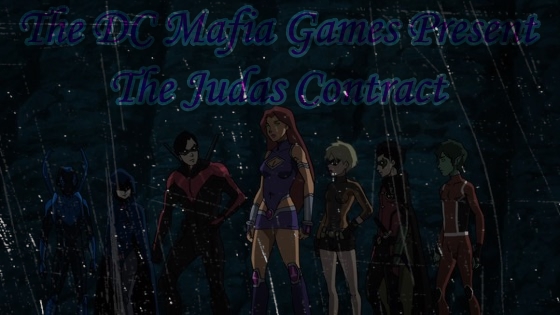 One of the many forms of betrayal by someone you know and care about is figuring out they are a mole. Leaking all the information you have to the other side. This is the story of Terra, how she manipulated her way into the teen titans. But also, how she herself was manipulated by Slade (aka Deathstroke). Whose side will come out victorious. Will it be on the side of Deathstroke? The one Terra has laid claim allegiance to? Or the side of our heroes? The one Terra has been adopted into as is part of a family? In this new telling of The Judas Contract, by you. You and the rest of the players choose the outcome. In hopes that the heroes win. However, there is always that chance they will lose. Good luck and have fun!

GAME PLAY
The game has 2 stages: a day phase and a night phase. During the day everyone gets to vote out a player they feel is a villain. During the night phase the villains converse on who they are taking out of the game. Just letting everyone know now the game starts in a night phase. Your objective is to find the villains and vote them out before they find you! That’s really it. Everything else is up to you players! There will be an example post in the FAQ of what these will look like. Character abilities can be used during the day phase or night phase depending on the character. Usually hero abilities can be used during the day; villain abilities are used at night (unless otherwise stated). The game can be complex at times as no one knows who’s who (except for the villains). Use strategy and keep your friends close…

Also a side note @TheQuestion101 will be helping me keep you all in line. Atleast for the most part

Here is a link to the DC Mafia Games Club. All new players that are NOT in the club need to join as it makes it easier to make the PM’s
https://community.dcuniverseinfinite.com/g/DCMafiaGames

Hello kids in the @DCMafiaGames I made a new one~

Also anyone is free to join in on the game! I have 40 spots to fill!

@NYJt3 @JayeJ.Jimenez @casasstrophe You are all in! I will write your names down someplace and keep a tally going!

@GetSnart Hello there! You’re in!

I was just about to tag you lol

The counter is back.