The Dark Underbelly of Comics: Dynamite Entertainment and Being Attacked by Comicsgaters

After careful consideration, the moderation team has determined this topic has exhausted the conversation that is this community’s intention, and has been closed from further comment. If you have any questions about this decision, you may contact the moderation team directly:
https://community.dcuniverseinfinite.com/g/moderators
Thanks for your understanding.

The last 13 hours have caused a lot of chaos on twitter, and in doing so have reminded me of one of the worst parts of comics: Comicsgate. For those who don’t know what Comicsgate is, it’s a hate group dedicated to harassing women, people of color, and LGBTQ+ people for the increasing diversity and liberalization of storytelling. DC Comics writers like Gail Simone, Vita Ayala, etc. have been attacked consistently by Comicsgaters. Comicsgate is one of the worst parts of the comics industry and is responsible for a lot of horrible things. You can read more about them here 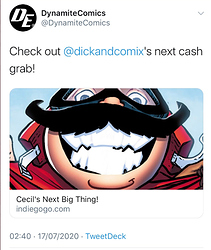 image703×832 265 KB
For some context, here is an ACTUAL page from the series Dynamite is promoting: 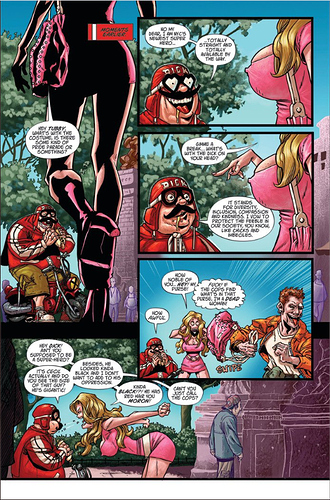 This comic is vile, racist, homophobic, and sexist and is downright hurtful. The fact that a MAJOR publisher is supporting this is serious cause for concern. This is a comic written by a comicsgater.

In response to Dynamites support, news websites like AiPT, Xavier Files, and more have announced that they will cease coverage of Dynamite Comics. This is HUGE news as Dynamite is one of the largest publishers in the comics industry.

So this is where my story comes in. I spent time on twitter sending out a bunch of tweets/replies to answer various peoples questions. One of my replies got retweet by the writer of the comic, and made it seem like I was endorsing and supporting the comic. So I replied with the following: 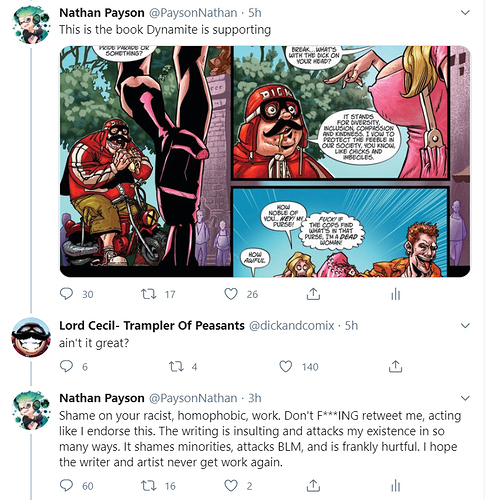 In response, I got hit by the full force of the Comicsgate community. In the next 4 hours, I got over four thousand notifications as comicsgaters attacked me. Some attacked me by taking this reply as an endorsement of the comic and retweeted it with added comments, while others like the Comicsgate Leader Ethan Van Shrier attacked me as well. Each retweet and comment by big name comicsgaters only increased the amount of hate I got. 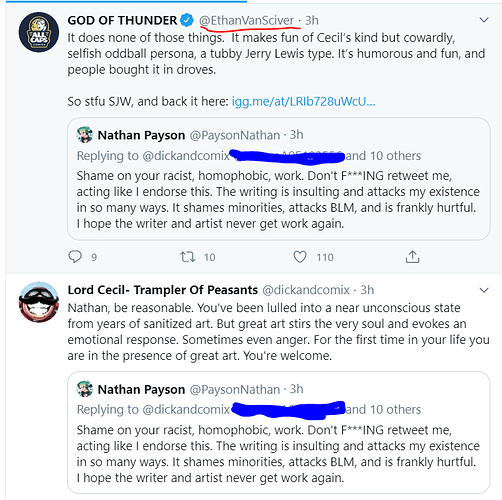 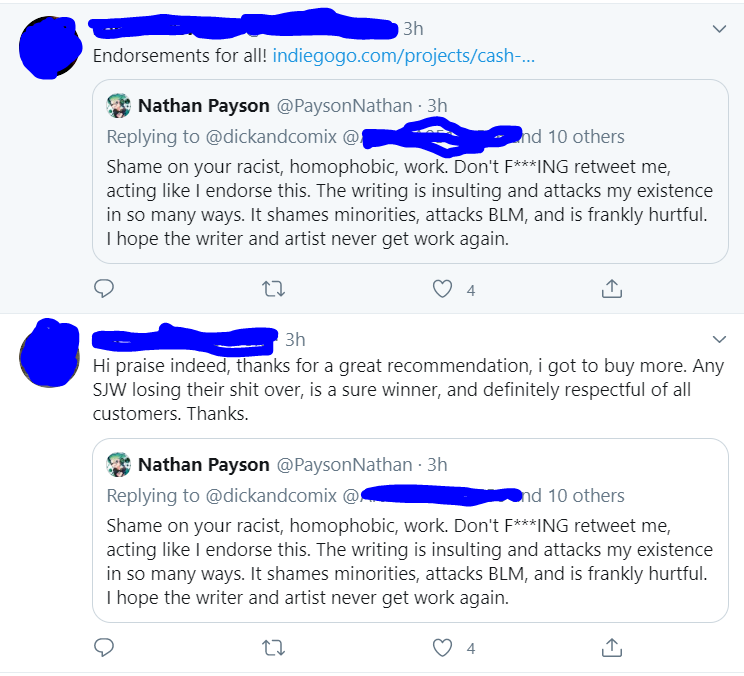 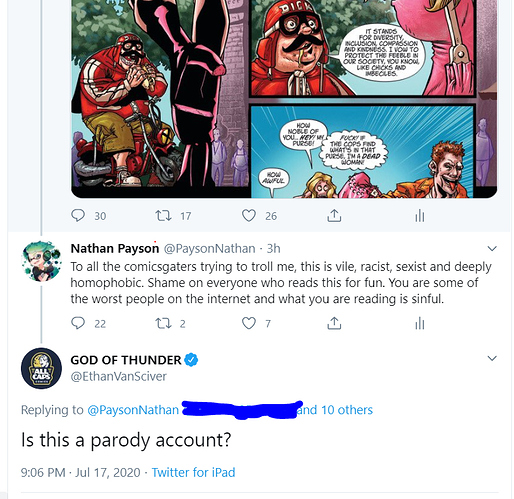 The list goes on and on. Some of the messages in the replies were genuinely horrifying and I can’t show without breaking DCU guidelines. This is what I faced as a random commenter of one post, imagine what people like Gail Simone, Vita Ayala, Cecil Castellucci, and others go through every day. People targeted me because I made some comments, while people attack Gail Simone because she has power and makes a living on comics.

The point to all of this is 1) Spreading awareness about Comicsgate and giving people an example of comicsgate tactics. 2) Spread awareness about Dynamite’s Actions. and 3) Help people get a sense of what various non-cis white male writers have to go through.

Thank you for reading this.
-Nathan.Payson 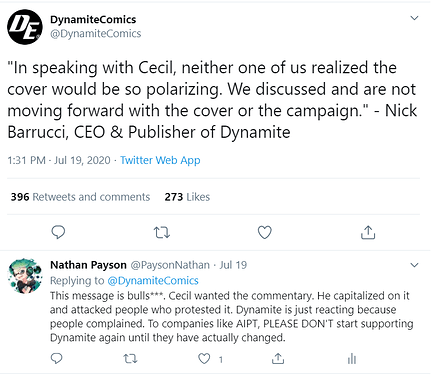 Of course, as I write in my tweet, after all the hate I got from Cecil and Comicsgate for my complaints, Dynamite releases this BS statement as damage control. However, Dynamite already pissed off Anti-Comicsgaters. Now, Dynamite has pissed off Comicsgaters by pulling support.

So Ethan Van Shriver, the Leader of Comicsgate, revealed details to punish Dynamite. I think it’s easiest for you guys to read this article from Screen Rant for more details. 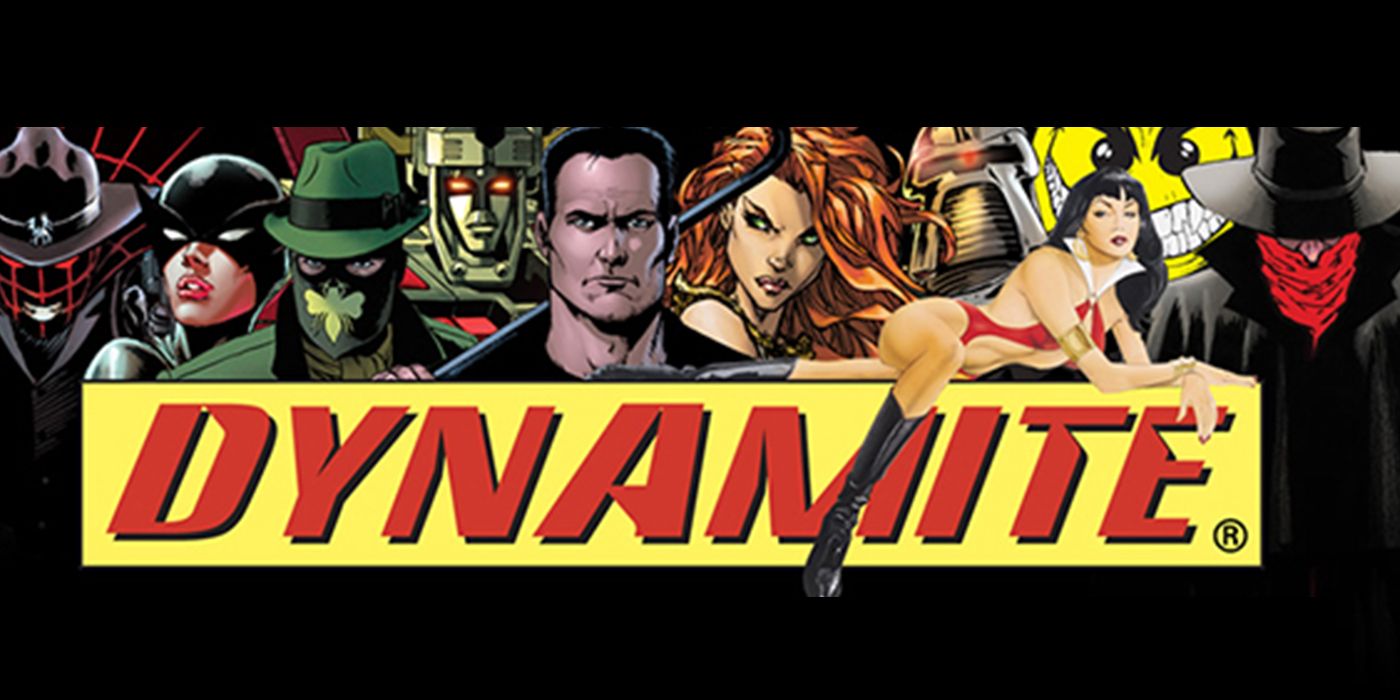 I’ve had to deal with my fair share of them when I stood up for Gail Simone being attacked on Twitter last year. They’re gross. And I know a ton of super nice people at Dynamite, so I really don’t know what to think.

But in my opinion, what I see of that comic above reads like satire to me. It is something I could expect to see in MAD or similar.

I personally don’t see satire existing as a problem, even if it represents an opposing argument to mine. The problem in my opinion is lack of representation in comics. That to be honest weighs more on the comic book companies than a ragtag group of $%$#.

I’m ok with someone making comics like the one above. It’s part of the discourse.

Sorry they came after you.

It’s taken me alot to process. People like Gail Simone have been very open today that they are processing what’s happening. I’m still processing how I feel, but after the attacks from comicsgate, I am steadfast in my belief that Dynamite’s support is wrong and is an endorsement of hate. Dynamite has done a lot of good, but we can’t ignore this.

But in my opinion, what I see of that comic above reads like satire to me. It is something I could expect to see in MAD or similar.

I’m curious, what do you think is being satirized?

I’m placing myself on a limb here, but the satire also isn’t completely off the mark.

I checked the thread, and just about every single person is protesting the comic. Yet if you look at statistics, most of those people (nearly all) would prove to have a very very undiverse pull list, pointing to them having an internal bias against diverse comics when they spend their money. The readers are just as guilty to the current state of the comics. A person who does not do diversity, but just call for it in public, is little more than a sad man with a d.i.c.k. hat.

Comicsgaters are #$%$ but if they disappeared tomorrow nothing would change. The average reader and the comicbook company is what maintains an undiverse comic market.

I’m curious, what do you think is being satirized?

There is a difference between making fun of “S J W” culture to prove a point. It is another thing to write a comic designed to piss of those people. Frankly there is a fine line between satire and insults and threats, and I feel like that beyond crossed the line. I am glad though that we can agree on the fact that comicsgaters are dangerous and that diversity is a huge problem.

P.S. The word S J W isn’t allowed in the server which is proof that this community is moderated by AMAZING PEOPLE.

I like comic books that feel greasy in my hand and this looks like one of them. Not a fan of this guy, it looks like he pinned your tweet to his page and that just radiates small d*** energy. Don’t let it get under your skin. In fact, I have an idea that pushes the line in comics, maybe even more so then this one here. Greasy comic book people are going to be greasy.

Also I think Nintendo going to sue somebody.

I don’t understand why you’ve labeled this or the people that tweeted you as “comicsgate” just cuz you think it’s offensive. That’s probably not the case… Besides, the character is clearly a jackass, which I think is the joke

I can see the point of poking fun at the more milquetoast, ineffectual, fake liberals that permeate these kinds of movements, but that looks really lame and thoughtless, and the creator is really feeling himself too much and has an overinflated sense of ego. Like, “for the first time in your life you are in the presence of great art”? :: Are we sure he’s not a parody account?

It should be interesting to see how Dynamite reacts to all of this. I’ve liked a lot of their work in the past, I would hope that they don’t try to appeal to or gather more of this rather lame content like this.

fake liberals that permeate these kinds of movements, but that looks really lame and thoughtless

Yeah, they did a pretty bad job of making fun of them in the comic. They should have done something more like this…
(Warning, if you are a S J W you may not like this.)

After having read the page shown in the tweet, I have a couple of responses…

I think of The Comic Guy from The Simpsons. He reflects the ugliest elements of comic fan culture. Sure, not every caustic element is true for every comic fan, but there are certainly enough people with those elements in our community that makes him ring true. That parody character shows US, the comics community what we are like at our worst. It lets US see what we should not become. Most of us would never have done so, but for those who might slide that way, his existence is a valuable dark mirror. My skin should be thick enough to take the criticism and see that.

EDIT: All of that aside, I am NOT in support of the ludicrous response you are getting. Also, thanks for starting this thread. I am sorry this mountain of nonsense is falling on you. I should have started with all of this rather than fitting it in at the end.

Just for clarity: Cecil, the creator of Cash Grab (the comic book in question), is an active member of the Comicsgate movement both on Twitter and on his YouTube channel, Cecil Says. This isn’t just some random bit of crude humor. It’s an answer to so-called “forced diversity” and the “social justice warriors” who have supposedly ruined the comic book industry. The humor in the featured panels might not seem all that different than the crass jokes of South Park and Family Guy, but it’s coming from a far more bigoted, mean-spirited place.

I don’t know enough to really spout off but this was a question I asked myself. I think a lot of the time the views of the author inform the context of the message. It’s harder to believe it’s thoughtful satire when it comes from CGWarriors. It’s implausible that the message is somehow neutral.

Thanks for explaining this. I saw this on Twitter and was not clear on what the context was and what everyone was so upset about.

And that’s a huge part of it. Intent of the joke is massive. When the jokes come from someone who believes in racism, homophobia, etc. writing a comic like that 99.99999999% of the time means you are attacking PoC, LGBTQ, and women with crass and obscene “jokes.”

Wow- I didn’t know ‘comicsgaters’ were a thing. They could just do everyone favor and call themselves @$$,holes. Because that’s clearly what they are.

And one page of that comic was one too many- that’s garbage. Dynamite should be ashamed to put their name on it.