For our [Superman Fan Club] first reading in June, we’ll be sampling Superman stories from the beginning, middle and the end of the Silver to Bronze Age. You may feel like we are racing through these materials, but honest, it’s just the theme this time around again 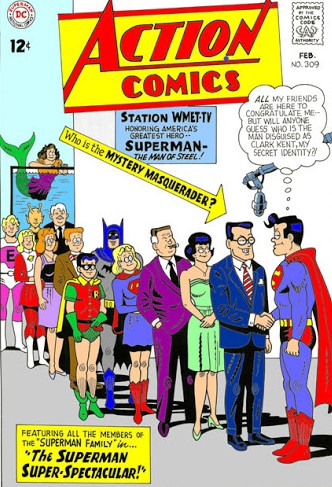 ACTION COMICS (1938-) #308 (January 1964) Action 308 “SUPERMAN MEETS THE GOLIATH-HERCULES!” A lightning bolt hurls Superman into a strange parallel world, where he must help Hercules, who looks oddly like Goliath. Plus, Supergirl is astonished by a little red-haired girl named Candy, who has superpowers similar to her own, in “THE SUPER-TOT FROM NOWHERE!”

ACTION COMICS (1938-) #309 (February 1964) Action 309 “THE SUPERMAN SUPER-SPECTACULAR!” When Our American Heroes, a TV show honoring great Americans, honors Superman, he is perplexed as to how he will find someone to portray Clark. The man for the job is none other than President John F. Kennedy. Plus, “THE UNTOLD STORY OF ARGO CITY!”

And finally…ONE MORE CRAZY SUPERMAN / FLASH MASHUP FROM THE PAST! A hidden glistening gem in our DC Universe library! WARNING: NOT FOR THE FAINT-HEARTED, BRING YOUR OWN SMELLING-SALTS!!! 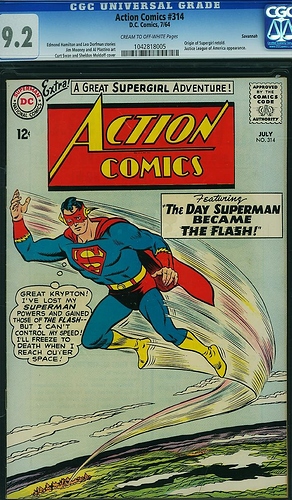 “THE DAY SUPERMAN BECAME THE FLASH!” Superman is summoned by fellow members of the Justice League to view a videotape that has come into their possession. What is on this tape will shake Superman to his core!

Spoilers alert: Enter questions you want answered or discussed in this wiki if you like:

x In Action Comics 308 with alternate Hercules / Goliath, what elements of the story have you seen used in Superman stories decades later?
x

In two weeks: we continue our breathtaking tour of all things Superman Silver and Bronze, but at a slower pace because all of the races are finally over!!! Who won anyway??? Us, that’s who!!!

The first cover is a tribute cover by cartoon artist Fred Hembeck. he’s done tribute covers for many of the Legion of Super-Heroes and Superman comics from the 50s and 60s. 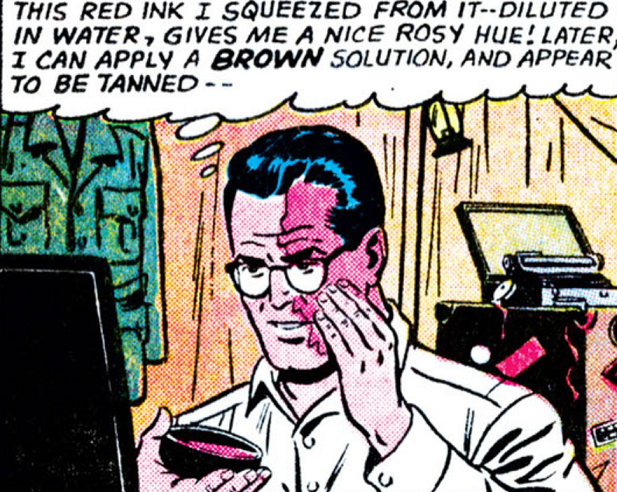 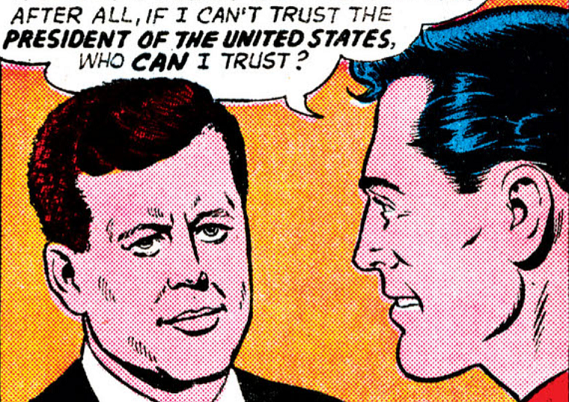 Up next: The Dark Knight Returns

Once we read the comics do we discuss and talk about them or something?

Welcome @PinkLightwaves ! Yes, right here in this post actually is where we discuss the comics for this reading. Usually I put some discussion questions in the post, this time I left an open wiki for people to add questions they want answered. Feel free to add to the very top of the thread or just post whatever you like here, tell us your thoughts about any of the comics that we’re reading this time around.

So Superman used his cape to make those metallic strands to help out Hercules in Action Comics 308. Interesting idea there.

Yeah I thought that was a pretty wild concept. Of course, in the Supergirl story, was pretty wild how that that kid got super powers.

Gotta say very happy with the biweekly schedule, just couldn’t get to Supes last week, but now I’ve still got plenty of time. Looking forward to them.

I enjoyed Action 309. Even though you had JFK in the description, I missed that and was quite surprised when I saw that. The Supergirl story was a big surprise and development too. I like Comet, if I don’t think about his background.

I’m about to post the second [Superman Fan Club] reading for June, but first, since no one else has reviewed this, here is the Cliff Notes version, lovingly rendered, of the classic Silver Age tale contained within our very own DC Universe Library, Action Comics #318, “The Five Other Identities of Superman.” released July 1964, right about when I began to get the comic book bug for life! (there’s a note that this was originally published as “The Day Superman Became the Flash”, but I have been unable to find if / when that was ever published). 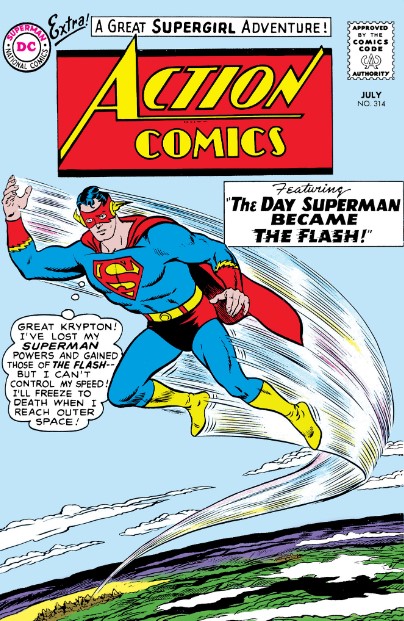 Ok, Superman is Flash for a day looks like on the cover, this could be fun…but as you turn the page, wait whatttt??? 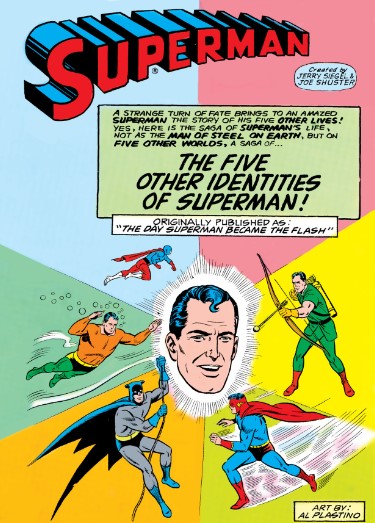 Superman becomes Batman, Atom, Green Arrow, Aquaman AND Flash???!!!??? How oh how can this be, oh Silver Age author?

Cliff Notes version time: Aquaman discovers a video recorder device deeeeep in the ocean with his octopus pal, and it’s a message from Jor-el for real that fell off the outside of Kal-el’s rocket as it entered the Earth’s atmosphere. The 5 superfriends have Superman view the recording, even though he is credulous about the whole deal, let me tell ya!

Turns out that just before Krypton exploded, Jor-el stopped by a fellow scientist’s lab, where a super computer had been designed that could fairly accurately predict the possible future for certain actions. So, when he is alone, Jor-el checks out what would happen to his baby son Kal-el depending on what nearby planet he sent him to. That’s where the fun begins!

First possible destination, Kal-el has this happen; sadly, everyone is a super giant on this planet except him, Kal-el appears as tiny as The Atom!

Second planet to check out on the super computer: it’s a water civilization, and Supes is an Aquaman type hero! 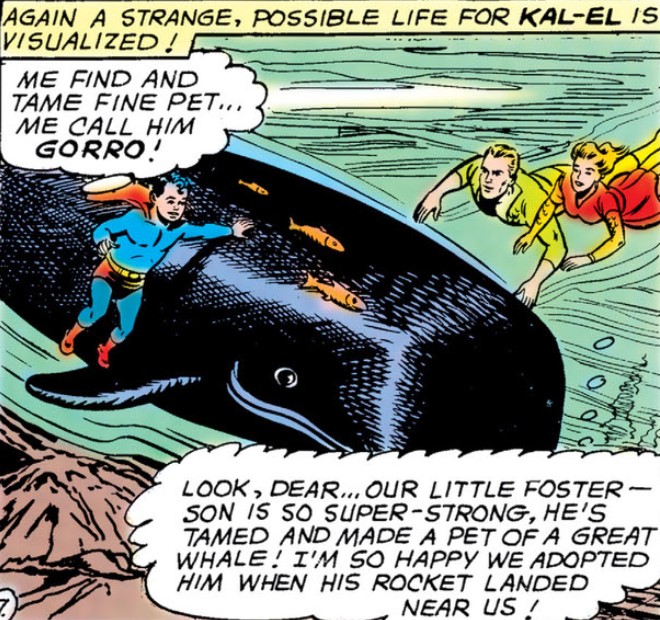 Ok, so far Jor-el is not liking these possible scenarios. Next planet please! Aw no, it’s a super primitive planet, and Superman takes to a bow and arrow approach to fighting crime…just like someone else on the League… 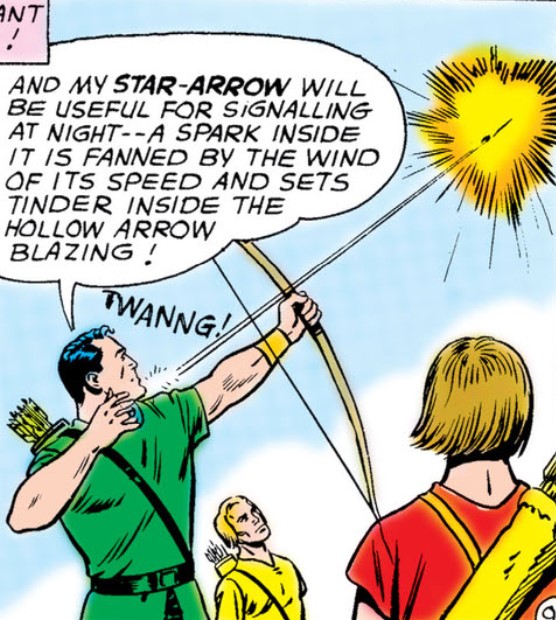 Ok, ok, planet #4 has to predict good, this can’t keep happening, right? Am I right?
Wouldn’t you know it (the super computer did), this planet is a super dark and depressing planet where Kal-el’s adoptive father trains him real hard and thinks it would be a great idea for him to model his costume after some night creature on that planet…ixney says Jor-el! Not for my bright bubbly baby boy!!! 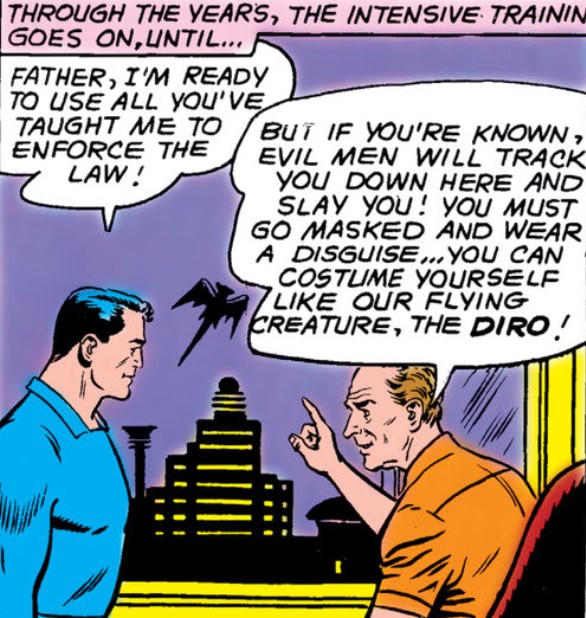 Planet 5, wow, it’s getting late in the lab, this absolutely must pan out, the planet’s rockin by now maybe! Here we go, it’s all about super energy doses, Kal-el gets really speedy, what could possibly go wrong this time, silly super computer, huh? 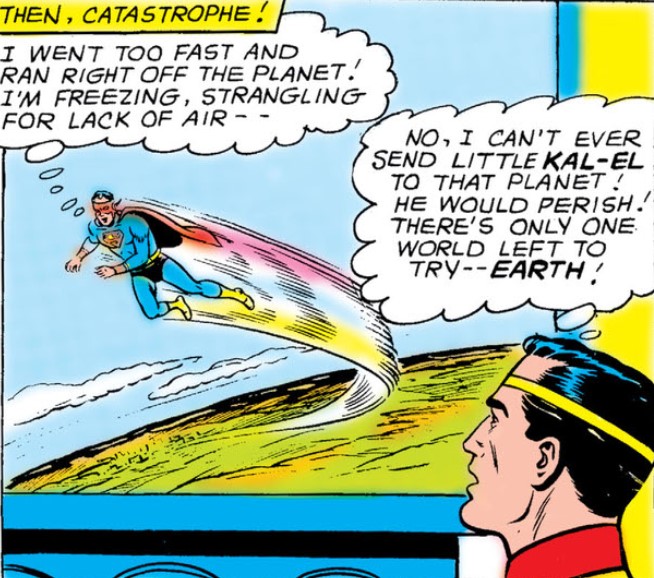 Oh, that, ok, that is bad, yup, Earth wins hands down, Superman it is then per Jor-el and the predictive super computer from Krypton! 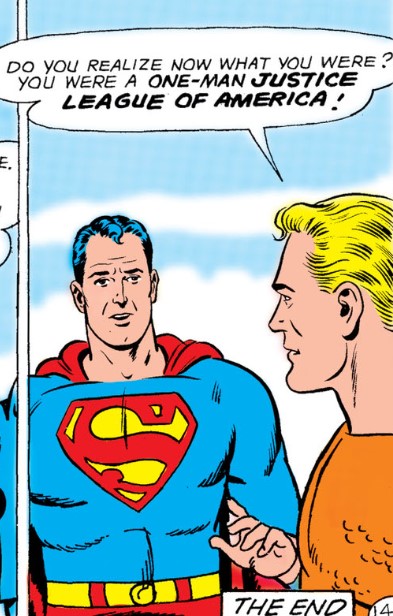 If that ending doesn’t say “Silver Age” clever, I don’t know what does!