Round Robin 2022 is officially in the books, and with that comes a new winner–Superboy: Man of Tomorrow! 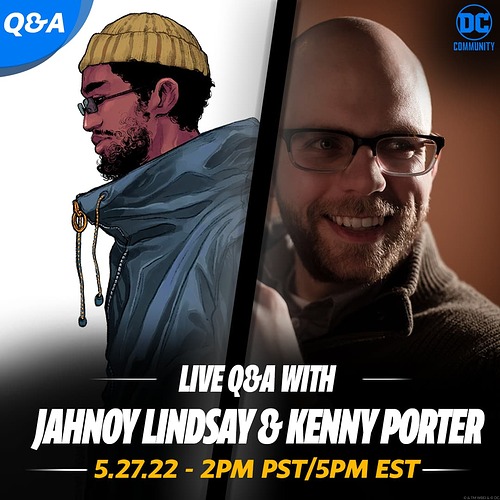 Join us next Friday (5/27) at 2pm PT for an exclusive Q&A with this year’s Round Robin winners, Jahnoy Lindsay and Kenny Porter! Want to know what it was like to be involved in Round Robin? Have questions about the upcoming Superboy: Man of Tomorrow book? Drop your burning questions for Jahnoy and Kenny, and come back to this thread next Friday for a deep dive into Round Robin 2022’s winning team and book!

Remember: please limit your questions to just 1 per user, so everyone has a chance to get a response in the limited time we have!

uper simple question for both folks:

Prior to the release of your book, I fully plan re-reads on both of those titles, so as to be extra-juiced for the latest Superman-related series to bear the “Man of Tomorrow” title.

Thank you both for stopping by for this Q&A, congratulations on winning this year’s Round Robin, and I can’t wait to fly into Kon’s newest adventure!

So with the various versions of Superboy in DCU right now, why did you chose Kon to be the Superboy of your story?

Hello and Congrats on the win

My question is why take Connor off world for his quest?

How about a name change for Superboy,

Just rambling some names out.

Thanks for another great Q&A! We just had one end and already have another to look forward to!

How did the two of you come to work together on this project? Was this something you both wanted to work on together or did DC pair you up at their discretion?

Ooh I’m excited! I’ve been rooting for Kon since the beginning!

My main question is:

What is your overall goal for this miniseries? Like, what are you hoping to accomplish through Superboy: Man of Tomorrow?

I really liked Supergirl: Woman of Tomorrow series by Tom King and It got me thinking about your pitch (now series, congratulations!)
With Woman of Tomorrow ending with Supergirl maturing as a hero and evolving with a new role and mantle in the future. I gotta ask if Superboy: Man of Tomorrow will have a similar thematic goal in mind?

It sounds like they would be a good companion piece with each other otherwise, giving plenty of prospects for more with these heroes in the future.

This is awesome! So glad to have another opportunity to pick your brains! My question is for Jahnoy - what artistic inspiration and influences are you looking at and would you recommend fans check out while waiting for more of the awesome art we’ve seen during the contest? I really loved the green car reference in the first page produced - really highlight’s Conner’s heritage and heroism!

Superboy often feels like two different characters – the “Metropolis Kid” we saw in Reign of the Supermen, his own 100 issue solo series, and the Young Justice comics, and the tortured, conflicted son of Luthor and Superman pioneered by Geoff Johns from the 2003 Teen Titans series up until Flashpoint. Which Superboy are we getting here? And who is Superboy? Is he both of these characters? Did one evolve into the other? Or has he moved on from one identity crisis to yet another?

I’m hoping that your new series will dig into the various alien cultures and otherworld heroes that we’ve seen over the past 60 years.

In particular, will this series possibly feature any of the cultures or characters of Legion of Super-Heroes, similar to the '90s L.E.G.I.O.N. series?

Hello. Thank you for taking the time to talk to us, and congrats on the win! Your book was one of two I was most interested in, with the other being the Cyborg book you knocked out in round 1

I’m going to echo @HubCityQuestion on the “who is Superboy” question. As a Superman fan, I’ve always been interested in Kon-El, but have only tangentially read his stories here & there, and of course I’ve watched Young Justice and Titans. My knowledge of the character could be better, but I noticed his personality and the way he looks changes quite a bit, from the brash young teen in the leather jacket in Death & Return to the angry but stoic t-shirt wearing version we see nowadays. Will your book be friendly to green Superboy readers like me that don’t have a good grip on him, or do I need to go back and familiarize myself a bit more?

Any chance we’ll be seeing Cassie Sandsmark in this series? I’d love to see them back together. Separately — leather jacket or black t-shirt?

Hi! I’m very excited about this new series and seeing what you come up with! Superboy usually looks relatively young when in his leather jacket look, but the preview showed him looking, to me, younger than he ever has. (Not a bad thing, in fact I love it! I like how he looks like a kid still figuring himself out, as opposed to how he looks kind of like an adult in his t-shirt look or the most recent Young Justice comics where he had scruff to show he had aged.) Was that just a matter of art style or was there an intent behind that? Thanks for answering our questions! Have a great day!

is there going to be any reference/mention to kon’s new 52 doppelgänger who’s out and about on earth somewhere?

Will you be touching upon any of the continuity from the recent Brian Michael Bendis Young Justice series that brought Superboy back to the DC Universe?

Congrats on the win guys, I was voting for you! Any chance Conner can get a new costume in your story? While I love his 90s look, it has more personality imo than just a t-shirt and jeans, I would love to see Jahnoy get the opportunity to redesign Conner’s outfit given everyone else in the Superfamily has been getting new looks recently!

What would you say is your hope/expectations for Conner with this book and then moving forward?

why choose only one, in a perfect world he would wear both the shirt and the jacket