In October, we’ll be rotating some of our movie library for the first time in a few months. Change, they say, is a good thing: but let’s take a moment to celebrate what we’ve got before it has to go.

This Sunday evening, I’ll be hosting my first community Watch-Along: a DC animated anthology double header. I’ve always had a special fondness for DC’s anthology films, where each is comprised of a series of interconnected shorts by different creative teams to tell smaller stories about a larger world. I’ve always wished DC would do more of these, so now is a great time to appreciate the ones we have.

This anthology of short films is unique in that it takes place in Christopher Nolan’s “Dark Knight” universe, at some point between Batman Begins and The Dark Knight. It’s also special for the Japanese animators which gave it such a unique sense of style, and the coolest version of Deadshot you’ll find this side of Belle Reve.

(Then, we take a short break. Restock your popcorn, go to the bathroom, whatever you gotta do.)

Narrated by Nathan Filion as Hal Jordan, this collection tells some of the stories of the strangest and most interesting alien members of the Green Lantern Corps. It also features an absolutely phenomenal adaptation of “Mogo Doesn’t Socialize,” which in my opinion is the greatest adaptation ever done of any Alan Moore story.

Feel free to join me for either film, or both! The action all goes down in this thread.

Never done a watch-along before? Here’s how it works:

Let’s not go gentle into that Good Knight! 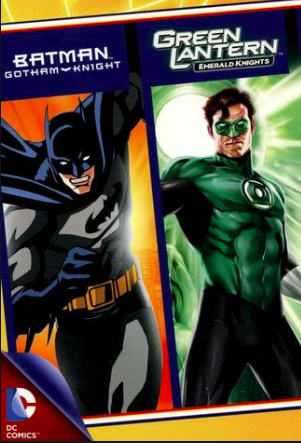 I can do Batman: Gotham Knight a-okay. It’s been a long time since I’ve seen that one.

Happy to have you, Vroom!

Been trying to get to emerald knight.

You’re welcome to join us, ABB!

The time is flying by, I’m inviting friends!!!

less than 12 hours…hope these are fun to watch, I’m banking my precious time on it, lol…

This will be my first rewatch of both.