Random thoughts on THE Suicide Squad after seeing a preview showing:

I have to watch it so I know how to take down all these villains.

I agree on about half of your points. I thought it was hillarious throughout and there’s not really another Superhero movie like it.

I’d give it a 5 of 5 personally. I went in with VERY high expectations and the movie’s quality for met. Didn’t nessecarily exceed them, but definitely met them. The ending was especially wild.

this movie is pretty darn shallow

Disagree. It’s main thematic ideas are about learning to trust again and remembering how to form bonds after people spent so long isolated and fighting only for themselves. It’s also thought about how easy those bonds can break when first disagreements can happen. It also has great critiques of the perception of what America is, and reconciling with it’s history.

not really that much suspense in the film prior to the finale, though the gradual unveiling of the main threat was effective enough to maintain my interest

I actually think the way this way was handled worked really well. I felt like anyone could die, but I wasn’t expecting this in the way it happened. For the back half of the movie, the deaths have a lot of meaning because of the amount of character work done earlier.

the film is consistently amusing when it tries to be, but seldom breaks through into “laugh out loud” territory

I was laughing the entire time.

does not particularly demand to be seen in a movie theater, but is a satisfying theater-going experience. Check your local Covid stats

Be safe everyone!!! The delta variant and covid are MUCH more dangerous now than even 2 weeks ago.

YEP!!! I was kinda expecting something like this, but it wasn’t very good.

5/5 for me. Funny, brutal, and surprisingly meaningful.

Hey, there should not be a ban on Stephanie Brown in this thread

dude for a minute I thought you meant cluemaster showed up and steph got mentioned then I realized you meant spoilers,

but question does anyone know what time it appears on hbomax like early in morning night/or not?

I first saw mention that you could first see it Thursday evening in theaters, so my guess is that evening on HBO Max (7 pm?)

Thanks for decoding the Spoiler joke for me 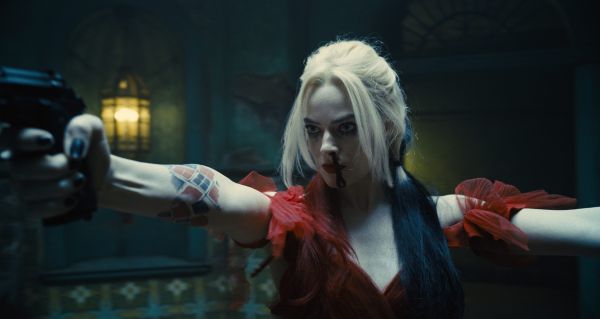 When Does ‘The Suicide Squad’ Drop on HBO Max?

James Gunn’s ‘The Suicide Squad’ arrives to reinvigorate the DCEU. When can you watch the standalone sequel on HBO Max?

I really disliked the first one so this one didn’t have to achieve much to be better but luckily it was good anyway. I enjoyed it while watching it but don’t know that I will ever make time to watch it again. I thought it had some good laughs, big surprises, and good kills. The action was fine but overall nothing special. Knowing Peacemaker is getting his own series makes me assume they thought that he would be the breakout star of the film but I couldn’t care less about seeing more of him. I felt like the effects work for Starro was really distracting. He/she/they looked like they belonged in a spoof of superhero movies or a Robot Chicken scene. Starro is an absurd concept so maybe it’s the only way to do it but it looked too silly or campy to me.

i really enjoyed it, it was super fun, there were a couple things that didn’t add up, but I’ll mention it on the spoiler one, enjoyed how they kept a reference to the last film at a minimum just that Harley, boomer, and flag had worked together before.

Just watched it, thought it was awesome. I’ll save most of my thoughts for a spoiler thread since it’s hard to talk about it w/o spoilers for me.

If there is another Suicide Squad film in the future I’ll try to avoid trailers. Seems like the best way to watch these specific films going in.

enjoyed how they kept a reference to the last film at a minimum just that Harley, boomer, and flag had worked together before.

Side-note: I’ve seen some reviews state it’s a sequel and some state it’s a reboot. I like to lean towards a Reboot or Soft-Reboot since besides that small detail of those 3 knowing each other, nothing specific was mentioned of their past together and some characters were re-worked like Rick Flag especially and 1 specific bit of Amanda Waller I thought (something from the 1st movie that they avoid in this one).

I liked the Office Space Reference

I feel that it is 100% a sequel - the only possibility is it occurs after the first movie. I don’t get why it is so hard for the directors of DC projects to say “sequel”.

In short thought it was awesome™

I don’t think it’s a sequel but still connects with everything previously in the DCEU.

It’s ultimately because they don’t wanna make people feel like they have to have seen the previous movie to understand the next one. It really just plays into the more standalone approach they’re taking w/ the DCEU and DC movies in general. While I can definitely appreciate the freedom that filmmakers have when they’re not beholden to strict continuity, it’s also frustrating because I still desperately want a DC equivalent of the MCU no matter how long it takes, and something like that certainly should take a long time

Maybe it’s something about having less pressure to stay faithful to the first one by avoiding calling it a sequel.

Like with Gunn and interviews I’ve seen with Joel Kinnaman he wanted to do something new and with Rick Flag Joel and Gunn worked close to bring about a Rick Flag that was different from the 2016 version, but that’s just my guess.

it’s also frustrating because I still desperately want a DC equivalent of the MCU no matter how long it takes, and something like that certainly should take a long time

I wonder if for DC they’ll just take what sticks and keep that stuff. I imagine this version of Suicide Squad given the critical praise and assuming public praise will keep in line with building continuity within the DCEU, ala Peacemaker show and whatever spin-offs or things James Gunn works on next for DC.

That definitely makes sense, but considering they did the same thing w/ Wonder Woman, I feel like the quality of/response to the 1st movie didn’t play that big a role in the “it’s not a sequel” approach. Even though most people loved the 1st WW, 1984 also wasn’t called a sequel. It really does feel like DC is being the anti-Marvel at this point. Whereas the MCU is a more complex, weaving story that really requires complete viewing to fully appreciate everything, DC movies lately have been more pick your poison. Like you can just check out whatever looks interesting to you and go in cold w/ no prior knowledge needed