This leads me to wonder in a new blog post if DCU should or will merge with CInemax or HBO Max?

Here’s the post with link to source for reference:

Will DC Universe merge with HBO Max or Cinemax?

Cinemax.com homepage on January 16, 2020 Cinemax, which has long been sort of known as the brother of HBO for movies, may not be getting any more original content. “I think you can expect there wil…

I saw several other HBO Max threads created here, but none that specifically discussed this new information about Cinemax not producing original content any more. It definitely opens the door for a possible DCU merge with Cinemax, if not HBO Max, should DCU even be interested in that kind of deal somewhere down the road.

This is pure speculation on my part. Just to be clear. What are your thoughts? Possible? Unlikely? Good idea? Bad idea?

Well, there’s a clear market for a comic subscription service (Marvel Unlimited is doing fine at around the same price range with only comics), so it would be stupid of them to drop that part. But I could see them amputating the Movies and TV section and taking that content over to HBO Max, or possibly somehow linking the two subscriptions.

I suspect DCU will probably stay in place in one form or another, but the people only here for shows/movies (who I still don’t understand, but whatever) are probably going to have to follow over to a different service.

I suspect DCU will probably stay in place in one form or another, but the people only here for shows/movies (who I still don’t understand, but whatever) are probably going to have to follow over to a different service.

I don’t know why people can’t enjoy both? In the scheme of things, DCU is an inexpensive monthly service. HBO Max, is going to be like twice the monthly price, which is going to be a hard sell for people budgeting entertainment $$$

I’ve already stated elsewhere I’m not here for the live action movie content, but clearly in that January 2020 post linked above, some are and very disappointed that HBO Max will be receiving more/most/all(?) DC live action movies.

According to.a Google Search Cinemax is another part of HBO, a premium.service. within it.

HBO MAX will be thr primary service of AT&T/ Warner Brothers. All other services within ATT will be secondary to it.

The goal is for HBO Max to have many millions of subscribers.

All DC films for the ladt forty years will be on HBO MAX. It will also has an animation component. mainly Looney Tunes but also an Aquaman animated series.

When.that happens all these assests woll be available to HBO Max but some of it lwill be shared with DC Universe. One major reason is that we had these titles previously and that DC Universe advertisement stresses animation especially new animation coming here 90 days after release.

It makes no sense for HBO Max to take the Comic Book.Library. it would confuse the branding of the product.

ATT wants DC Universe to survive. It would not have hired additional staff and developed Community 2.0 if it did not. And remember Community 2.0 is free to all No membership required. It is a free advertisement for DC Univeese.

The New Big DC series will be om HBO MAX. Only that service will have the resources to fund those series

But again ATT wants DC Universe to survive. We are a biche engaged membership eager for DC products. It would show good will and be an advertisment for HBO Max to rotate in some of its assests to DC Universe, if only a portion and for a limited period of time

I fully expect the Original Content and the older TV series, animated or live action to remain. here. ATT will not gut DC Universe.

I expect that DC animated films will have a home here. Maybe not every title but most.

I hope that HBO Max wilp share some on recents films snd series to us, on a rotating basis and for a limited period of time. It make sense.

Those will want recent movies only should transfer to HBO MAX if they can afgord it.

We will see in May and the months beyond what sharing will occur.

I question the ongoing viability of Cinemax more than I do DCU. In an era of cord cutting and streaming services the rationale for paying for premium cable channels is disappearing unless you are a top brand like HBO. I expect HBO and Showtime will keep their efforts on heir top brands and possibly let the Movie Channels and Cinemax die. DCU on the other hand is completely unique.

Fair concern. I’m just saying they have something that DCU currently does not have and maybe it’s the other way. Maybe Cinemax merges into DCU(?). Cinemax has an After Dark section that is more adult-themed and that would fit a more mature audience.

The two together would be more of a general audience service than either is standalone… Cinemax isn’t going to be as desirable without any new original shows being produced and DCU without more live action movies is going to be a turnoff to subscribers looking for that.

I doubt it would matter much to branding to most general audience movie fans – these are the people who are likely complaining that the film content is lacking here. In particular I think what’s confusing and bothersome is that the DC live action movies aren’t here. In lieu of that, almost no other movie content of any kind leaves the service a strictly niche comic book and animated series platform. I’m not saying there is any problem with that, I like that in fact, but others may not.

I could see them doing some sort of “bundle” deal, like what Disney Plus does with Hulu and ESPN Plus.

I honestly wouldn’t be too bothered if all the visual parts of DCU went away. I’m happy with just the comics. I’m not saying I HOPE the shows go away, I know that would upset a lot of people. But my primary use of this app is for reading.

Hbo max*
If HBO max has DC shows now why would I continue my membership?

Now that HBO Max is now streaming and showing DC movies and shows like Doom Patrol, Teen Titans: The Judas Contract, and Batman vs. Robin, do you think DC Universe and HBO Max will merge? I mean, there are a ton of movies and tv shows we don’t have on here, including a few movies from the DC Animated Universe like:

Now that HBO Max is now streaming and showing DC movies and shows like Doom Patrol, Teen Titans: The Judas Contract, and Batman vs. Robin, do you think DC Universe and HBO Max will merge? I mean, there are a ton of movies and tv shows we don’t have on here, including a few movies from the DC Animated Universe like:

It would make sense to merge but I’ve grown to really love this app. I’m not sure how they would merge the comics and community aspect to HBO Max. It would be lovely to have all DC content in one place and not on different services.

I’m not sure how they would merge the comics and community aspect to HBO Max.

They wouldn’t, and that’s why I find the idea to be an awful one. At worst, DCU would no longer exist. At best, it would become indistinguishable from Marvel Unlimited. Just leave it alone. HBO Max has plenty of non-DC material for people to watch, so there’s no reason to throw all of our video content over there.

If HBO max has DC shows now why would I continue my membership?

Because DC Universe is not and was never intended to be a simple streaming service or an exclusive repository of DC Comics-related content.

I mean, I could see the TV shows and movies merging together with HBO Max and having DCU just be a place for comic books like Marvel Unlimited. It’s just that the pricing for HBO Max is ridiculous! What I pay for each of my other streaming services (DCU, Rooster Teeth, Disney+, Netflix, Hulu, etc.) is way cheaper than a monthly subscription for HBO Max!!

I think a more logical way to merge the two services would be simply allowing the HBO Max login to work here and vice versa. Expand the existing HBO Max “DC” area to include everything movie and TV related here and link over here for the comics and community – DONE.

Technically, this is basic webmaster and minor technical stuff to allow the shared logins from HBO Max – as long as the account holder paid for the bundling deal.

That’s how this could be accomplished from a technical standpoint. This way nothing needs to really change here. They already have a platform and way of doing things that works.

It’s been said numerous times in these forums and we’ve been assured by the moderators that DC Universe will remain as-is. It’s not going anywhere and it’s not merging/folded into other services.

Doom Patrol is an exception as it is being aired concurrently between HBO Max and DCU, but even their head of content has stated no other DCU shows will be coming to HBO Max 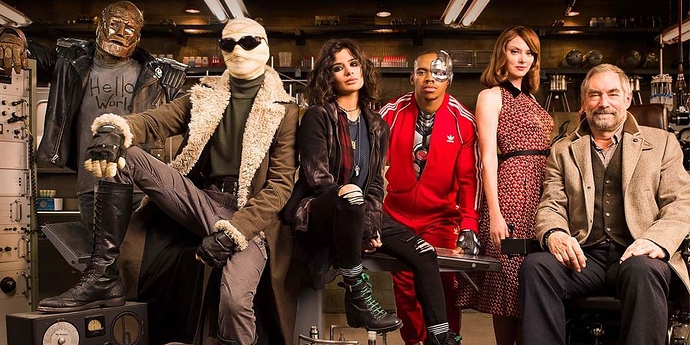 HBO Max has confirmed that, for the time being, Doom Patrol will be the only DC Universe original to jump to the new service.

It’s been said numerous times in these forums and we’ve been assured by the moderators that DC Universe will remain as-is. It’s not going anywhere and it’s not merging/folded into other services.

Sure, they’ve said that. Doesn’t mean that it won’t still happen in the future. The Snyder cut was “never” going to be released either. Now, it’s a major marketing bit for HBO Max.

Time changes things. I’m simply saying if they are going to bundle the services – which IMO is a great idea – there is no reason to “change” much of anything here. Keep it going the way it is, make a few links, have the Max logins work and bam, it’s all good.