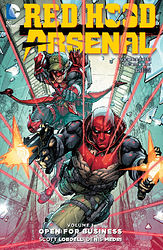 The Renegade Robins Club starts the short-lived adventures of Red Hood/Arsenal! Will they make it without Kori? Discuss this story in the comments below!

Poll Question: How do you feel about this change in direction for the series?

The @RenegadeRobinsClub will rejoin this dynamic duo next month! Next week, follow the further adventures of Damian Wayne!

I like the dynamic between Jason and Roy in these issues. It’s got a relatively fun story, but overall I think it’s just okay in near every aspect. Story, art, and dialog are all competent if just a little forgettable.

It seems like Underbelly could have had a little more of an arc before Roy eliminated him; I think there was something more interesting they could have done there.

The humor is a little too juvenile for me. I do have to give some credit for putting a fart joke as a title, though

I would absolutely watch an animated series of these two. With adult themes and language- I’m looking at you WB. They are comedy!
Who am I kidding, I’d be first in line for anything related to Roy Harper. He is a long time favorite. His story is not the prettiest; but its always been very real world. I do always wish that the writers would tap into his Navajo roots. What a trove of possibilities that unleash. It’s better than calling him a hillbilly.
Reading these two together, makes me want to read the outlaws series; but the writing in this series… well it’s not the best. 14 issues is fine; but dozens, I don’t know if I have it in me. But the chemistry between Roy and Jason is like a sirens call; of course I’m going to read it.

I do love the chemistry between Jason and Roy here but then again I’ve always enjoyed that aspect of the first Outlaws series the most.

@jenoutmind I agree it would be interesting if someone would tap into Roy’s Navajo roots. As a person of Native American descent on my mother’s side I would love to see that happen.

I thought this was a decent few issues. They don’t do anything really deep or character driven with the two leads (at least until the end Joker’s Daughter is introduced), but it’s light, it has some fun action, and I’ll admit it got a couple of chuckles out of me.

It seems like Underbelly could have had a little more of an arc before Roy eliminated him; I think there was something more interesting they could have done there.

Yeah, I was thinking the same – Underbelly had the potential to be an interesting reoccurring villain. Jason (and Roy to a certain extent) have in their stories dealing with city corruption to some degree, what better foe for them to face than a literal avatar of city corruption?

@jenoutmind I agree it would be interesting if someone would tap into Roy’s Navajo roots.

The only story with Roy that comes to my mind that really plays with his roots like that is in Benjamin Percy’s Green Arrow Rebirth run, specifically in issues #18-20, “The Return of Roy Haper.”